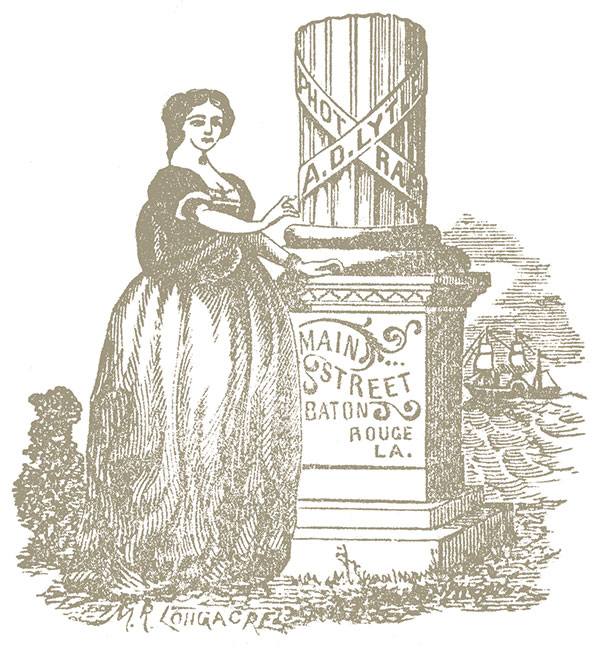 White neoclassical buildings boasting large columns at their entrance typify antebellum architecture, from government buildings to plantation homes. As such, it is unsurprising that this imagery is a common fixture in Southern and Southwestern studio

backdrops used during the Civil War.

Backdrops during the period often evoke context of where the photograph had taken place. It follows then, and should be of no surprise, that photographer Andrew D. Lytle used the example we are studying here in his work in Baton Rouge, La.

The Rise of Baton Rouge

Interlaced with the Mississippi River, Baton Rouge became Louisiana’s capital in place of New Orleans in 1849. The state legislature, consisting principally of rural, wealthy Anglo planters, made the decision to move in order to rid themselves of what they felt was undue influence exerted by the local French Creole population. A multicultural, dynamic city bursting with the vibrancy of more than 100,000 citizens, New Orleans ranked as the fifth largest city in the nation. Legislators could more easily dominate Baton Rouge, a much smaller, sleepy and quintessentially Southern river town garrisoned by plantations.

Mark Twain once said of the city upon seeing it for the first time: “For we were in the absolute South now—no modifications, no compromises, no halfway measures…we were certainly in the South at last; for here the sugar region begins, and the plantations—vast green levels, with sugar-mill and negro quarters clustered together in the middle distance—were in view. And there was a tropical sun overhead and a tropical swelter in the air.”

Though relatively small, Baton Rouge enjoyed economic prosperity and strong growth in the years leading up the Civil War, spurred in part by its distinction as the seat of government. Its strategic position on the Mississippi made it a prize once the onset of hostilities began, and it quickly fell to Union forces in late 1861. Despite one formidable attempt to recapture the city, Baton Rouge remained under Union control throughout the war, providing an important artery for the dispersal of federal troops. The occupation proved a harrowing experience for many locals. But for at least one Baton Rouge photographer, it became a lucrative opportunity.

Andrew David Lytle, an Ohio-born photographer, honed his craft as a daguerreotypist in Cincinnati. He left the North sometime in the 1850s and ended up in Baton Rouge, finding the growing city in need of a skilled photographer.

Lytle established a gallery on Main Street near a prominent hotel, and ostensibly embraced the attitudes and culture of his adopted co-citizens. This was palpably evident once the war began, with Lytle advertising in a local newspaper, “Every body and their wife go to Lytle’s and get their picture taken before Old Abe is inaugurated. After that time everyone will look blue, although a good many are blue in anticipation of the fact.” Later, several periodicals noted that local Baton Rouge “boys” were having their portraits taken at Lytle’s Gallery before leaving for the war.

After the federals captured Baton Rouge, Lytle’s studio made portraits of the Yankee occupiers. This occurrence places Lytle among a small cadre of photographers who photographed both Confederate and Union soldiers.

Ever the opportunist, Lytle brokered agreements with the Union Army and Navy to photograph camps and vessels near Baton Rouge. Today, his existing negatives from those contracts constitute some of the best photographic documentation of the Civil War.

Anecdotal evidence from his family and friends suggests Lytle’s allegiance was always to his adopted home and state, even after Union forces lined his pockets through lucrative contract agreements. Lytle’s own son suggested that he was part of a reconnaissance network of spies that reported enemy troop movements to Confederate forces in New Orleans and beyond. Though difficult to ascertain exactly the extent of Lytle’s involvement, peripheral evidence and oral tradition suggests his unwavering support of the Southern cause.

Lytle’s studio backdrop evokes the spirit of antebellum Baton Rouge and the city’s surrounding landscape. One side of the painted view, seen in many portraits, prominently features a neoclassical building fit with Ionic columns. The structure sits in front of a winding river: likely the Mississippi, which flanks Baton Rouge. Could there be a more archetypical expression of Southern wealth and aspiration? The foreground of the backdrop is a black-and-white marbled floor reminiscent of a chessboard. The portion closest to the picture plane exhibits white tile panels that appear to be elongated octagons, while the ones farther away, in front of the building, are simple squares. Draping the entire scene are hazy, billowing clouds that roll across the sky before a mountainous beyond.

The other side of the backdrop, also seen in many of Lytle’s portraits, depicts a flower-filled vase on a white bannister. The same marble floor pattern can be seen from this angle of the backdrop, along with a continuation of the river and sky with clouds.

Are you aware of information regarding a backdrop’s location and/or photographer that’s never been published? Is there a particular backdrop that’s stumped you for years? Do you have an idea for the next subject to explore? If so, I am happy to receive comments and suggestions. While this column will initially categorize different observations and connect newly learned material, a much more broad focus will be its ultimate goal. I hope to eventually study regional trends and aesthetic differences in the work of the artists who produced backdrops. An investigation of these more general topics depends upon a vast assemblage of information, and I am indebted to the many kind collectors and readers who have already contributed to this effort. Please reach out with what you know or hope to know!

Adam Ochs Fleischer is passionate researcher of Civil War photography and an admitted image “addict.” He began collecting in high school and quickly became obsessed. He lives in Chicago, Ill.

VISIT OUR STORE to subscribe, renew a subscription, and more