Among the men of faith who tended to the spiritual needs of the Florida Brigade of the Army of Tennessee was Robert Lemuel Wiggins. Born in Baldwin, Ga., Wiggins lived in Marion, Fla., when the war began. In late 1862, he joined the 4th Florida Infantry as chaplain and served until he resigned in February 1865. During his tenure, the Floridians fought in the major battles of Murfreesboro, Chickamauga and Missionary Ridge. For two of Wiggins’ brothers who served in the 4th, Missionary Ridge proved their last combat as both were captured and sent to the Confederate prison camp at Rock Island, Ill. George Augustus Wiggins of Company G died in captivity. James Wiggins ended his imprisonment in October 1864 when he enlisted in the 3rd U.S. Infantry and served along the Oregon Trail at Fort Kearney, Nebraska Territory—a so-called “Galvanized Yankee.”

After the war, Chaplain Wiggins returned to his native Georgia. In 1872, he married Ann Elizabeth Pitts, the widow of Pvt. William Henry Kimbrough of the 31st Georgia Infantry (Muscogee Confederates), who died of disease in a Lynchburg, Va., hospital in 1862. Rev. Wiggins and his wife raised three children in addition to the son of Pvt. Kimbrough who had been born a little less than a month after his father succumbed to disease in Virginia. After Ann’s death, Wiggins wed Augusta Bell in 1882 and had one son.

A bearded Union musician in regulation uniform poses with his sword and wears a cap with the regimental number 80 attached to the center of the infantry horn insignia. The relatively high number suggests he served in a regiment from Illinois, New York, Ohio, Pennsylvania or Indiana. On a technical note, a blackened tin backing provides contrast for this clear glass ambrotype instead of the more common lacquer applied directly to the plate.

One can imagine the crash of the cymbals in the hands of this Union bandsman dressed in a finely detailed uniform complete with a federal belt plate.

Two native Virginians posed for this portrait in their hometown of Alexandria.

Capt. Robert Fitzgerald Knox, seated, settled in Alexandria from his native Warrenton before the war. In April 1861, he started his military service as a second lieutenant in the local Emmet Guards, which became Company G of the commonwealth’s 17th infantry. He advanced to captain a year later, and went on to suffer three battle wounds: at Seven Pines in 1862, Drewry’s Bluff in 1864 and Dinwiddie Court House in 1865. He survived his injuries and the war, returned to Alexandria, and became a real estate agent and active civic leader, including justice of the peace, an office he held upon his death at age 80 in 1916.

Alexandria-born William Fowle Dennis joined Company E of Col. John Singleton Mosby’s 43rd Cavalry Battalion in the summer of 1864 and served until April 1865. During this time, Company E was linked to raids across a broad expanse of territory from the northern Shenandoah Valley to southern Maryland and Virginia’s Northern Neck along the Chesapeake Bay. Dennis survived his service and returned to Alexandria, where he died in 1877 at age 33. 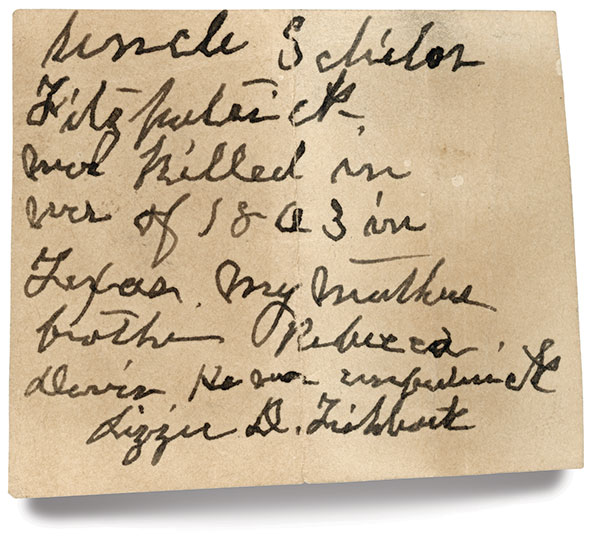 “Uncle Schuyler Fitzpatrick was killed in the war of 1863 in Texas,” is written in faded ink on a scrap of paper tucked into the case of this soldier portrait. Research reveals Schuyler G. Fitzpatrick, a 25-year-old trader from Missouri, joined W.P. Lane’s Texas Rangers in April 1861. The Rangers later became part of the 2nd Texas Cavalry. Fitzpatrick’s service ended in late March 1863 with his death at Pine Bluff, Ark. The exact circumstance of his demise is unclear.

VISIT OUR STORE to subscribe, renew a subscription, and more