The focus of this installment is the backdrop used in the coastal city of Beaufort, S.C., at the beginning of the war. Its tropical scene is often confused with the backdrop used by photographer John Jones at the Rendezvous of Distribution in Virginia, which I investigated in my inaugural column (Spring 2020).

To differentiate the two here satisfies one of the principal objectives of this column: To clearly organize the vast universe of similar-looking backdrops.

The Beaufort backdrop is well known to collectors, but often misdescribed. Many believe that Sam A. Cooley, the prolific photographer who operated in the Port Royal area, used it. While this was a reasonable assumption heretofore, I think we can possibly discount him as a suitable candidate. (We’ll get to that in a bit). Another common misconception about the backdrop is its location. I’ve heard many claims of its being used in Hilton Head. Ample primary evidence, some provided here, decidedly contradicts this and establishes the backdrop as being located in Beaufort.

Today’s Yankee invader of Beaufort takes form in a vacationing pot-bellied Midwesterner, there to play golf and bother local bartenders, not to burn the city. He is clad in a Tommy Bahama shirt, not a frock coat, and armed with a Corona, not a rifle. This was not the case in late 1861. Union forces swept into the region following the Battle of Port Royal, which saw a swift Confederate forfeiture of Beaufort and towns along the sound. Quick to take advantage of the strategic position of the area, the troops quickly secured most of South Carolina’s coastal sea islands. White Southerners fled the area and their plantations, leaving thousands of slaves who were promptly emancipated and enrolled in the “Port Royal Experiment,” a program under which newly freed people were provided access to education and the opportunity to work abandoned land for themselves. Photographers such as Timothy H. O’Sullivan (who later joined Mathew Brady) and Henry P. Moore richly documented the remarkable assemblage of people, social change, landscape and general chaos of that time in the Port Royal Sound area.

Of the many identified examples of the Beaufort backdrop I’ve cataloged, all date to the spring of 1862. A disproportionate number depict members of the 100th Pennsylvania “Roundheads” and 79th New York “Highlanders” infantries. This is not by coincidence, of course, as both regiments were attached to brigades headquartered in Beaufort during that time. Their representation in my archive of the backdrop is likely due to how heavily the two regiments are studied and collected. One soldier that had a tintype made was Pvt. Joseph H. Slemmons of the 100th, who wrote in his diary on March 25 that he “got a pass this forenoon and went to town and had my likeness taken.” Reproduced here are the very pass referenced and the “likeness” made as a result of Slemmons’ visit. 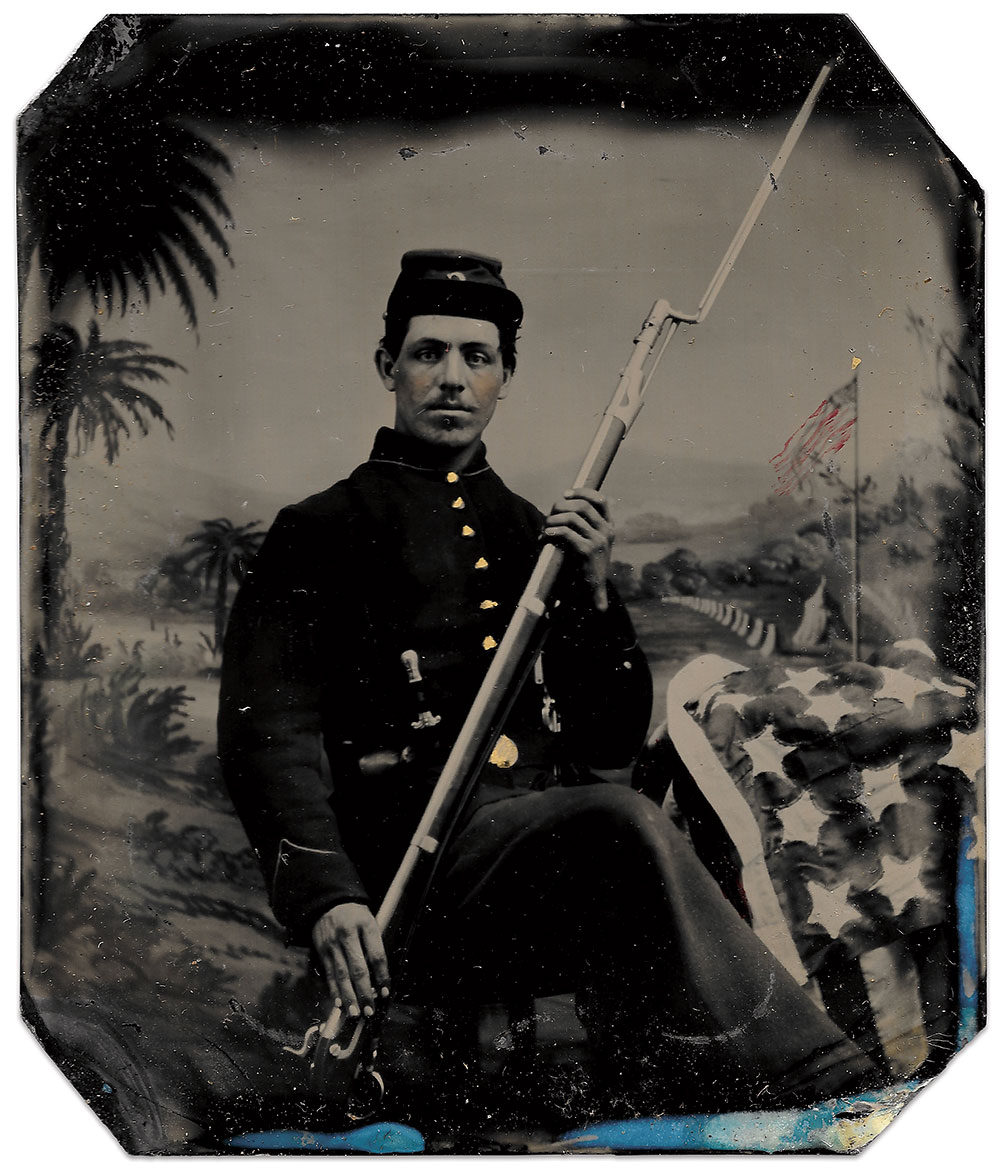 In Slemmons’ portrait, take notice of a common fixture in photos taken with the Beaufort backdrop: A small table draped with a color-tinted American flag. Most images, but not all, feature the flag, and not always colored. Unlike props used by other photographers that remain fairly static, the table and flag seem to have often been moved and positioned differently, as to best compliment the pose of the subject. There is even an example known in which a soldier is seated on the flag itself—draped over his chair rather than covering the small table.

As mentioned, the backdrop resembles the one used by John Jones at the Rendezvous of Distribution. The aesthetic is soft and familiar, alive and verdant when colored, almost like a tropical Thomas Kinkade painting (military tents in the place of stone cottages, of course). Subjects are usually positioned such that they are flanked on the foreground’s left by looming palm trees, and on its right by a pole bearing the American flag, which is often colored. At the base of the pole sit A-frame military tents, which recede back from the picture frame into a foggy, mountainous beyond. In many examples, the various flora that surround the trees and tents are colored green. The artist attempted a foreshortening effect, but the similar angles at which the palm trees tilt right and the tents and flagpole tilt left almost create a Petzval swirl effect, a phenomenon caused by the distortion of the popular Petzval lens, rather than an actual sense of distance.

While often attributed to Sam A. Cooley, who is well known to photo enthusiasts, I have yet to find any evidence that he was the photographer that used this backdrop. In fact, my evidence suggests he likely wasn’t. Newspaper accounts and other reports describe him as working as a sutler in Beaufort during the spring of 1862, not as a photographer. Further, the Free South newspaper ran an advertisement placed by Cooley in June of 1863. In it, he references Maj. Gen. David Hunter, the commander of the military Department of the South who freed area slaves, and Brig. Gen. Rufus Saxton, the governor of the Department.

The ad reads, in part, “Photographs, Melainotypes, Vignette, Carte De Visites … The Subscriber having for a long time seen the necessity of a first class Photographic Gallery in this city, has by the kind permission of General Hunter and Governor Saxton, established over his store an extensive saloon with a large skylight and secured the services of three skillful operators from New York, and is now prepared to take likenesses every style of the art.”

The ad is a rather damning rebuttal to proponents of the Cooley attribution. Still, I’m unwilling to completely dismiss him as a possibility. We do know he had photographic experience and was in Beaufort before the war. I do not believe it completely implausible Cooley was moonlighting as a portrait artist while officially engaged in sutler duties. Also, not to parse the semantics of the Free South ad, but perhaps he did not consider his studio (if he was indeed operating one 1861-1862) a “first class establishment?” The simplest answer is that Cooley is not our man, but if a reader has evidence to the contrary, I’d love to see it.

If not Cooley, who then was the photographer? Several suitable candidates emerge. As mentioned earlier, Henry P. Moore and Timothy H. O’Sullivan worked in the area during this time, but both are really only known as field photographers. There does exist a negative, taken by Moore, of the 3rd New Hampshire in front of a tent that reads “Dagtypes,” which offers an interesting clue. Whether the portraits actually taken there are by Moore is difficult to say. Another intriguing possibility is the photographic firm run by Phillip Haas and Washington Peale (Haas and Peale), who were contracted by the government to produce views during this time, but certainly could have also taken portraits.

The last individual I’ll put forward as a plausible contender is a little-known photographer named R.V. Balsan, who also apparently worked sometimes as a doctor. In 1863, the Free South described Balsan as being “now prepared to take photographs … in every style. … He also tenders his thanks to all of his friends who have so liberally patronized him during his time in Beaufort.” Perhaps Balsan is the man “behind the backdrop.”

Are you aware of information regarding a backdrop’s location and/or photographer that’s never been published? Is there a particular backdrop that’s stumped you for years? Do you have an idea for the next subject to explore? If so, I am happy to receive comments and suggestions. While this column will initially categorize different observations and connect newly learned material, a much more broad focus will be its ultimate goal. I hope to eventually study regional trends and aesthetic differences in the work of the artists who produced backdrops. An investigation of these more general topics depends upon a vast assemblage of information, and I am indebted to the many kind collectors and readers who have already contributed to this effort. Please reach out with what you know or hope to know!

Adam Ochs Fleischer is passionate researcher of Civil War photography and an admitted image “addict.” He began collecting in high school and quickly became obsessed. He lives in Chicago, Ill.