Most of the time, Civil War photo sleuthing feels like searching for a needle in vast haystacks of books, photo collections and websites. And, we’d be thrilled to find just one matching photo.

Occasionally, we face a very different problem: our photo seems to pop up everywhere, plastered across Ancestry, Find-a-Grave and Facebook groups. Even then, we still can’t find any useful information about it. The real challenge is not finding a match, but rather the provenance.

This sleuthing story begins with an email from an MI subscriber, Dr. Bruce Fineman of Denver, Colo. Fineman had encountered a Civil War soldier portrait in an unlikely place—a kind of Internet joke called an “image macro”— while preparing a presentation for the Rocky Mountain Civil War Roundtable. He was seeking help in identifying the soldier’s name.

Image macros, according to KnowYourMeme.com, are captioned images that consist of a picture and a witty message or catchphrase, often shared on social media, in email messages or on discussion forums. The examples Fineman came upon caricatured the primitive state of battlefield medicine during the Civil War, and the limited options available to surgeons faced with overwhelming numbers of critically wounded men.

A typical example would present a medical condition, followed by an over-the-top medical treatment, such as “Got a splinter? Amputate!” or “Common cold? Have some morphine!” or “Head wound? Apply the tourniquet!”

The punch lines were superimposed over a portrait of a bearded Union officer wearing the uniform of an army surgeon: a frock coat with two rows of staff buttons and oak leaves on his shoulder straps. Apparently, this surgeon had prescribed these exaggerated remedies. But what was his name? A physician himself, Fineman became increasingly curious as he ran into these macros online. It had become, he joked, “a ‘life-long’ quest.

Researching this photo required solving two different mysteries—one from Internet history, the other from Civil War history. First, I needed to track down the provenance of the Civil War surgeon macros. If I could locate the original, it might offer clues to help me identify the soldier.Fineman provided several example macros in his email, but I wanted to find more. I ran a Google Images search for the phrase “Civil War surgeon.” No dice. I tried “Civil War surgeon macro,” but only got results of Civil War-era medical instruments photographed in macro mode. I then tried “Civil War surgeon meme”—“meme” is another term for a viral Internet joke. Google returned a hit, Quickmeme.com. This site allows users to create image macro templates so that others could easily provide their own punch lines. Sure enough, a template called “Civil War Doctor” featured our mystery man.

Quickmeme macros don’t include dates. But a bit of online research narrowed down the time window. According to The Daily Dot, Quickmeme launched in 2010, and soon found an audience on Reddit, a popular news and discussion site. By 2013, Reddit served as home to more than a million Quickmeme posts. After evidence surfaced however, suggesting this popularity was manufactured, the site permanently banned Quickmeme. Although both Quickmeme and the ban still exist, the Civil War Doctor was most likely created during Quickmeme’s heyday, between 2010 and 2013.

Sure enough, a search through Reddit’s archives yielded a thread from September 2011 entitled, “I present to you: Civil War Doctor.” The original poster linked to the “Got a splinter? Amputate!” macro. Other posters chimed in with suggested captions and puns disguised as feedback (“This meme doesn’t have legs …”). While I seemed to have found the original macro, the thread contained no information about the origin of the soldier portrait, and the poster was no longer active on the site. I was back to square one.

Or was I? Now that I had an idea of who posted the macro, I could imagine wearing his or her shoes for a moment. If I was a Reddit user seeking a photo for an image macro, where would I look first? The average person wouldn’t know to use the 19th-century term “surgeon,” and the Reddit thread itself referred to a “Civil War doctor.” The search engine produced the result, which was exactly what I was looking for

The image was the same portrait of the Civil War soldier, but for the first time, I saw it unencumbered by any captions or punch lines. It was hosted on MedicalAntiques.com, an invaluable source of photos and information on Civil War medicine run by Drs. Michael Echols and Doug Arbittier. The mystery man was not identified, and the file name was simply “civil war surgeon.jpg.” I emailed the site owners. Echols replied that same day, eager to help but apologetic. He didn’t know the identity of the soldier or where the photo came from, though it had likely been on the site since at least 2012. The trail had gone cold again.

I was almost ready to share the bad news with Fineman, but one more idea was worth a try. Now that I had a “clean” version of the surgeon photo, I ran it through TinEye.com, a reverse image search tool. TinEye compares a searched image to its database of over 25 million reference images archived from around the web, and returns any close matches. (Google Images has this feature, too, but TinEye’s interface for exploring the search results is more powerful.) The site returned 46 matches dating back to 2009, including a Photoshop contest entry in which the surgeon advertised an iPod, and a few false alarms for possible identifications.

Several sites, including Find-a-Grave, identified the soldier as Oliver Wood, colonel of the 22nd Ohio Infantry, and later the 4th U.S. Veteran Volunteers (Hancock’s Corps). The U.S. Military History Institute’s MOLLUS collection however, includes a clear portrait of Wood. And, while both men wear full beards, they otherwise do not look alike.

Working through the remaining TinEye search results, I clicked a result from the genealogy site DeadFred.com, and my eyes widened. All versions of the surgeon photo I’d seen so far had been cropped, but this one showed the mount of a carte de visite. For the first time, I viewed the complete photo in all its glory. The CDV was slightly worn, and its imperfections perfectly matched up with the cropped versions, suggesting this was the original.

Better still, the DeadFred photo was accompanied by details written by the uploader. This person wrote that it “was found in a box of papers and pictures that had belonged to a cousin’s parents/and or grandparents” who were descendants of Clinton Love, born in 1804 in New York, and the photo “has the name John H. Love written on the back.” With the help of some Kansas historians, they located a “Lt. John Love” who served before and during the Civil War, as well as Clinton Love’s son John, who died as a private. But their ranks didn’t appear to match the mystery soldier. The uploader hoped that “someone will see this photo and recognize this man.” According to Joe Bott, DeadFred’s archivist, the uploader posted the photo 12 years ago.

I found 88 Union soldiers named John Love in the American Civil War Research Database, including the son of Clinton Love. But, none had served as a lieutenant. I also located a James E. Love, a private in the 5th U.S. Reserve Corps before the war, a first lieutenant and adjutant of the 8th Kansas Infantry during the war, and subject of a book of Civil War love letters after the war. I suspect James was the “Lt. John Love” referenced by the uploader. But James Love had mustered out as a captain, and wartime portraits show him as a different man than our mystery surgeon.

There was, however, a Surgeon John Love. Maj. John James Hervey Love, born in 1833 in Warren County, N.J., served as regimental surgeon of the 13th New Jersey Infantry, and brigade and division surgeon-in-chief for the XII Corps. The MOLLUS collection also possesses a wartime portrait of Love, which removes any doubt. The mystery man looks a bit older and wearier, and his beard slightly longer. But he is clearly John Love. The mystery was solved—not just for Fineman, but also for Echols and Arbittier, and, perhaps most importantly, the owner of the original photo. I’ve reached out to the original owner. But as 12 years have passed, it’s a long shot. 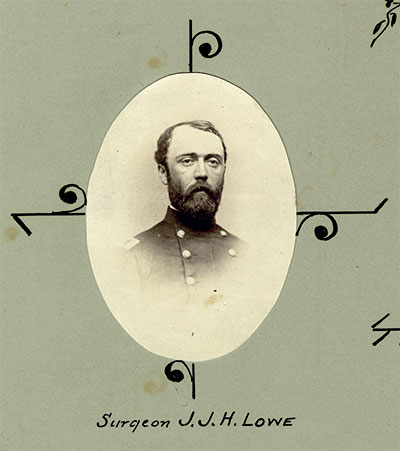 I wondered what Surgeon Love would think about his recent rise to Internet celebrity, and the punch lines about needless amputations, tourniquets and morphine. While we can only guess, the historical record offers a glimpse into his attitudes during the war.

Love served in the army from 1862 to 1864, and he was on duty at Antietam, Chancellorsville and Gettysburg. A few months into his service, Love wrote to a friend, “I am heartily sick of this life. I came out knowing just what it was, but a deep sense of duty to my country impelled me to go. I would return to-morrow if it were not for the same feeling of duty. On the day and after the battle of Antietam I had very, very hard work. I stood at the amputating table for four consecutive days and looked at night more than a butcher from the slaughter house than anything else.”

That same sense of duty animated him for the rest of his life. More than 30 years later, in 1897, Dr. John J. H. Love  died at the bedside of a patient, still hard at work. He was buried in Rosedale Cemetery, in his native New Jersey.

We encourage you to submit other photo mysteries to be investigated as well as summaries of your best success stories to MI via email. Please also check out our Facebook page, Civil War Photo Sleuth, to continue the discussion online.

Kurt Luther is an assistant professor of computer science and, by courtesy, history at Virginia Tech. He writes and speaks about ways that technology can support historical research, education and preservation.