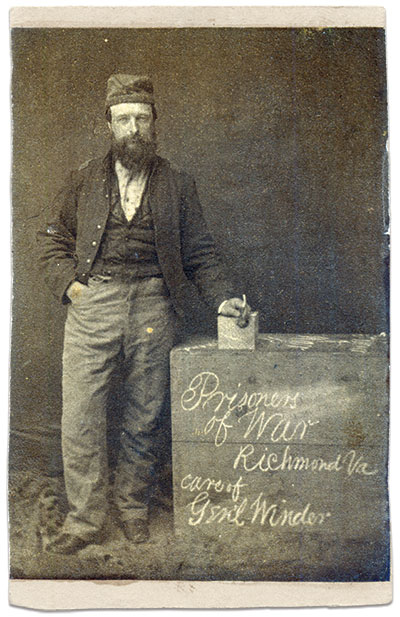 A pipe wielding, unnamed Union officer stands beside a large wood box, marked in chalk, “Prisoner of War Richmond Va care of Gen’l Winder.” A period pencil inscription on the back reads “Ypsi July 1863.” One theory holds that this officer hailed from Ypsilanti, Mich., and fell into enemy hands and was transported to Libby Prison, Castle Thunder or Belle Isle. The date suggests his possible capture during the Battle of Gettysburg.

The man in charge of Richmond’s military prisons at this time was the city’s provost marshal, Brig. Gen. John H. Winder, a West Pointer who had resigned his commission in 1861 to join the South. In 1864, he became commissary general of Confederate prisons, and served in this capacity until he suffered a fatal heart attack during the last months of the Confederacy.

The fate of this officer is unknown.