The pelican embossed belt plate and buttons worn by this lieutenant leave no doubt of his loyalty to Louisiana and the Confederacy. If he had pulled his sword just a few inches out from its scabbard, the stamped mark which reads “Thomas Griswold & Co / New Orleans” would be visible. His identity is not known.
The Model 1842 musket held by the Confederate enlisted man pictured here incudes a bayonet pointed downward and neatly attached to the upper sling swivel on the barrel. This was possibly done to prevent accident by a fully extended bayonet or to save space. The Colt revolver tucked into his belt and striped cuffs are also noteworthy. Though not identified, he is believed to have served in the 6th Tennessee Infantry.
This Union corporal headed off to fight wearing a reminder of the past in the form of a pre-war militia waist belt buckle and breast plate. Both items suggest a Massachusetts origin, and may have been worn by his father. If they were intended as good luck charms, whether or not they worked is a mystery. The company letter E attached to his cap provides the only other clue to his identity.
Although the identity of this federal enlisted man, left, has become separated from his portrait, the time of day he sat for his likeness is crystal clear: 2:25 p.m., according to the hands on the open-faced pocket watch with Roman numerals, suspended from a chain attached to the top button of his uniform coat. Also of interest is the sword bayonet he holds in one hand, which is likely a prop as the Model 1842 musket he cradles with the other arm is already topped by a bayonet.

The prominent shako, tight-fitting jacket and baggy pants worn by this infantryman, above, indicates his service in one of the French chasseur-inspired regiments of the Union army. A closer study of his uniform details suggests that he likely belonged to the 18th Massachusetts, 62nd Pennsylvania or 82nd Pennsylvania. Of additional interest is the rarely scene New Haven Arms Company Volcanic pistol tucked into his belt.

On July 1, 1862, Irish-born 1st Lt. John H. Donovan of the 69th New York Infantry went into action at the Battle of Malvern Hill, Va. During the heavy fighting with his comrades in the Irish Brigade, he suffered the loss of an eye and the mutilation of his right ear before he fell into enemy hands. Exchanged the following month, Donovan returned to his regiment with a promotion to captain. He went on to fight at Fredericksburg, where he was again wounded, and at Chancellorsville. Upon the consolidation of the 69th in June 1863, he received an honorable discharge and joined the Veteran Reserve Corps. Donovan ended the war as a major, and then served in the regular army. He died in 1882.

A group of federal cavalrymen armed with sabers and pipes relax outdoors for this informal group portrait. The contents of the sheet of paper held by the enlisted man, standing left of center, tells a larger story. It may have been orders to leave for the South, notification of a commission or perhaps the acceptance of a marriage proposal or a love letter. Whatever the subject, these men gathered to remember the occasion. Their names have been lost to history. Clues to their identity include the company letters G and H, and the Rhode Island style pleated coats worn by two troopers (detail, left). 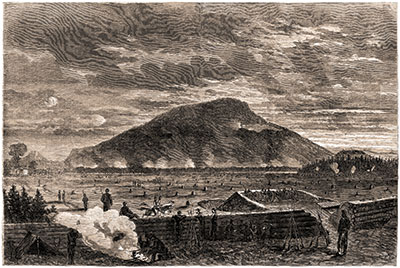 The intrepid and talented war artist Theodore R. Davis (1840-1894) dangled his legs over the edge of the iconic outcropping of rock on Lookout Mountain in Tennessee at some point after the Confederate seige of Chattanooga ended on Nov. 25, 1863. Seated behind Davis are staff officers from the Union Army of the Cumberland, including, from left to right, Capt. Henry Stone of the 1st Wisconsin Infantry, Maj. Gates P. Thruston of the 1st Ohio Infantry, Col. Joseph W. Burke of the 10th Ohio Infantry, Capt. Hunter Brook of the 2nd Minnesota Infantry, an unidentified officer and Maj. Charles S. Cotter of the 1st Ohio Light Artillery. Davis’ numerous sketches in Harper’s Weekly include this November 1863 engraving of the mountain upon which he is seated.