Civil War history is often best served when we contribute to it. Author and artist Mark Dunkelman did just that in monumental fashion in Gettysburg.

During a battlefield trip in April 1970, at the Coster Avenue scene of the July 1, 1863, fight at Kuhn’s Brickyard, he noticed a roofing company expanding its warehouse with an 80-foot wall of concrete block. The wall would seriously detract from the nearby memorial to his great-grandfather’s regiment, the 154th New York Infantry. The Empire State boys had fought hard and lost heavily on this patch of hallowed ground.

Some might have waged war to have the unsightly structure removed. Not Dunkelman. “I could make the wall disappear by covering it with a mural depicting the brickyard fight, on the very site where it took place,” he recalled years later.

The story of how the mural came into existence and subsequent restoration efforts are documented in Gettysburg’s Coster Avenue: The Brickyard Fight and the Mural. Printed and distributed by Gettysburg Publishing, the book is one of many books and articles authored by the prolific Dunkelman. His writings include more than a dozen pieces that have appeared in MI. 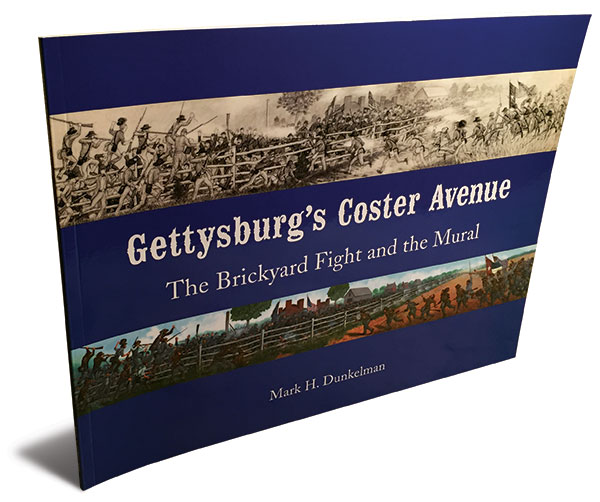 Dunkelman is the driving force behind preserving the legacy of the 154th, also known at the Hardtack Regiment. He has spent a lifetime educating the public and raising awareness about its men and officers. So, it is fitting that the first of the two-part book is a well-told story of the brickyard fight. Dunkelman traces the history of the engagement from a mere footnote for a century after the battle to contemporary historians who have described the fight in detail. He then provides an authoritative account of the action that resulted in 570 Union and 208 Confederate casualties, illustrated with wartime portraits and postwar views of the monument. Among the book’s images is the iconic “Children of the Battlefield,” Fred, Frank and Alice Humiston. Their father, Sgt. Amos Humiston of the 154th, died at Gettysburg clutching an ambrotype of his children.

The second part of the book traces Dunkelman’s early interest in the Civil War and the 154th to his training as an artist and the enormous effort to create the mural. In telling his story, Dunkelman reveals how a single individual can shape events. He shines a light on a long-overlooked part of one of the world’s best-known battlefields, and pays tribute to soldiers from New York, Pennsylvania, North Carolina and Louisiana.

Dunkelman notes that when he first visited Coster Avenue, he never saw other people there. Now, he sees them on every visit. This is perhaps his greatest legacy.

Gettysburg’s Coster Avenue is highly recommended to both novices and longtime students of the war.