A Compendium of Rangers

Profiles of these rebel leaders are among those featured in author Robert W. Black’s well-crafted monograph, Yank and Rebel Rangers: Special Operations in the American Civil War. The volume is published by Sword & Pen Military, a division of Sword & Pen Books, a U.K. company with a focus on military history and militaria. 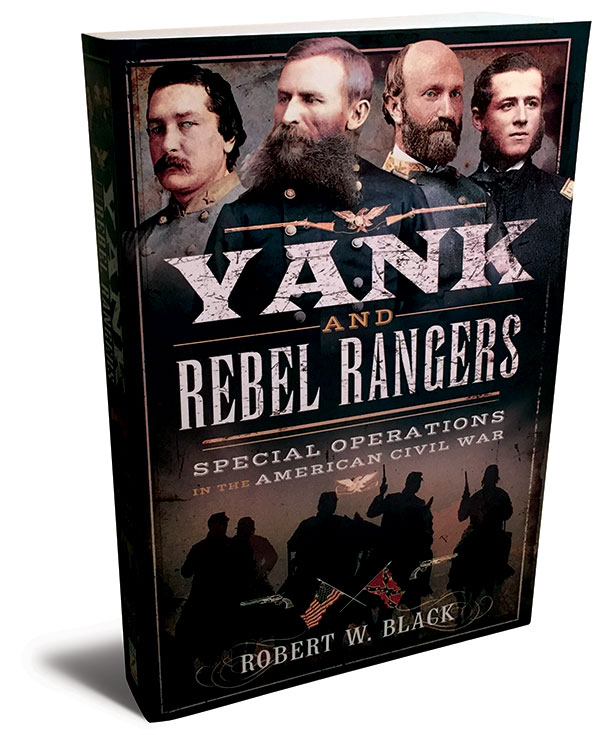 Black, a decorated U.S. Army Ranger colonel who fought in Korea and Vietnam, has studied the history of Rangers in a series of authoritative books. In this effort to capture the essence of a Ranger during the Civil War, he excels in providing definition and context. Black’s preface and two-part introduction span the origins of the Rangers in Britain and the American colonies in the 17th century to the military and cultural background during the Civil War. “Terrain is the workplace of the Ranger,” Black notes in discussing the rough country in which the Rangers operated. Black also observes that many Union-loyal subjects believed ambushing—a classic military tactic well used by Rangers—an unjust method: “In America it was a tactic routinely employed by both Indians and whites from their early encounters.

What follows are profiles of 13 Ranger organizations on the Southern side, including rebels who participated in the raid on St. Albans, Vt., and the plot to burn New York City. Fascinating reading here. Black also examines 10 Union organizations, among them Henry Harrison Young’s men and Sheridan’s Scouts.

If you’re looking for John Singleton Mosby, John Hunt Morgan and Nathan Bedford Forrest, they are not to be found here. Black defines them and their commands as irregular forces, and directs readers to consult his 2008 book, Ghost, Thunderbolt, and Wizard: Mosby, Morgan, and Forrest in the Civil War.

Yank and Rebel Rangers is illustrated with 14 soldier portraits ranging from often-reproduced generals to a few lesser knowns. This is not a photo book, but a compendium of Civil War Rangers. Pick up a copy in print or digital—you’ll come away a more informed and better student of the Civil War.

On a spring morning in 1864, a photographer peered out the window of his upstairs gallery and aimed a camera lens at the central business district of the town below. The series of images he produced reveal scenes that might have occurred in any American community. Horse-drawn wagons and buggies of all shapes and sizes move in as many directions as there are vehicles along a wide and unpaved thoroughfare. Generous sidewalks dotted with men and women. A variety of three- and four-story buildings tightly packed along the business corridor. 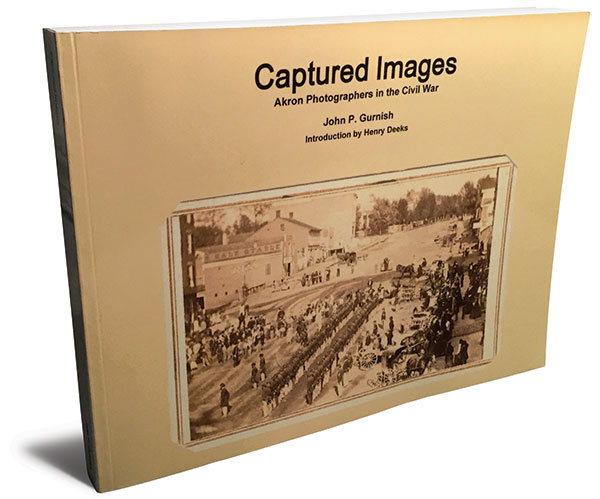 It’s easy to imagine the people milling about, consumed with the tasks at hand in the moment. Shopping for a new suit of clothes or a farming implement. Delivering fresh produce or goods from a local factory. Chatting about hometown sons and fathers in local regiments or the prospects for Grant’s army as it geared up to take on Bobby Lee’s boys.

The image described here is only one of the many scenes and faces in John P. Gurnish’s Captured Images: Akron Photographers in the Civil War. This book is the result of a decades-long exploration by Gurnish, a dedicated collector of Civil War artifacts since the 1960s.

Captured Images documents the author’s lifetime of study of images with a passion and perspective that only a collector possesses. The volume is uniquely organized to showcase the images in five chapters, each highlighting the work of a single photographer. The first lensman, Ohio-born pioneer daguerreian Samuel J. Miller, landed in Akron in 1839, and opened a gallery in the 1840s. He left Akron before the war, working for a time in the New York City gallery of Jeremiah Gurney. Four more chapters document the work of photographers present in Akron during the war years. Each chapter features representative examples of the sun artist’s portfolio: men in uniform and civilian attire, women, children and local scenes.

Captured Images provides a thoughtful visual study of one community. Yet it is also an exploration of the larger American experience of the 19th century. The late Henry Deeks, an influential collector and dealer with lasting connections in the collecting community, wrote an introduction that provides context and insight. Deeks asks the question, what do Akron’s wartime photographers tell us today through their surviving work? He also offers an answer. “They provided a visual record of people and place. Their work is our invitation to travel wider. Viewing any portrait or landscape will lead you to knowing a community.”