These stereoviews produced by photographer George Stacy at the camp of the 5th New York Infantry near Fortress Monroe in May 1861 picture the Zouaves on parade and off duty. 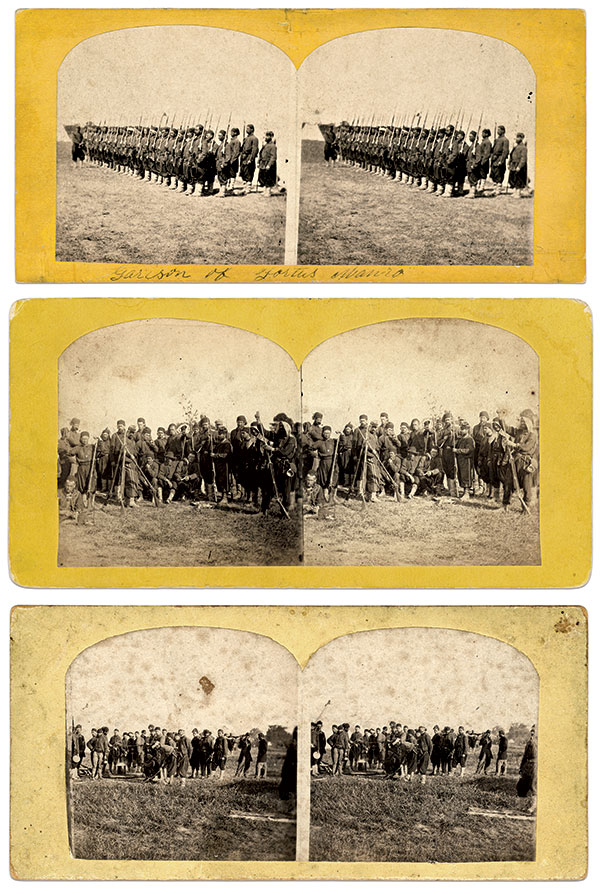 The contrast in the conformity of the uniforms on parade and the varied dress off duty is notable. The lack of consistency in the off-duty scenes can be explained by the casual, relaxed nature of the moment. And yet, it may also provide evidence of a lack of supply of Zouave clothing of sufficient quality to withstand the rigors of campaign and camp life, which was much regretted by the men of the regiment.

Stacy had something of a front row seat to the regiment’s formation. On April 22, 1861, its organizer, Col. Abram Duryée, established a recruiting station at 632 Broadway in New York City, across the street from Stacy’s studio at number 691.

Less than a month later, on May 18, Stacy joined a crowd of about 2,000 New Yorkers at Fort Schuyler in the Bronx, about 15 miles northeast of his Manhattan gallery, to watch Duryée’s Zouaves as they prepared to leave for the South. Stacy produced his first views of the regiment that day, only a few of which have surfaced. The New York Times reported in its May 22 edition, “Photographs of the regiment in line, in close column in mass, of each company separately, of the Field and Line officers, and of many individual members, were taken on Saturday by STACY, of No. 691 Broadway.”

A day after Stacy made these images, the 5th departed New York City. Six days later, the regiment reached Fortress Monroe on the Virginia Peninsula, and established Camp Butler, soon to become known as Camp Hamilton.

Stacy followed the Zouaves to Virginia and by June 4 had established a gallery near their encampment. In a letter to a loved one four days later, an enlisted man of the regiment wrote, “I have often thought that a description of our camp, and of the daily routine therein carried on, might not be unpleasant or unprofitable for you to hear. The pen, however, can convey but an imperfect idea. Would you obtain a clear notion of matters and things, you must visit Mr. STACY, No. 691 Broadway. This gentleman–a well known photographer and stereoscopist–came on with the regiment, and has, since his arrival, been busy in ‘taking’ us, in which he has been very successful–much more so than will be the enemy, I assure you.”

On June 12, 1861, the New York Tribune reported that Stacy had just returned from Fortress Monroe with “a number of stereoscopic pictures of that work, and its surroundings, including views of the troops now encamped in its vicinity, and points of interest in the neighborhood.” Within hours, these photographs were probably for sale in his Broadway gallery as “Stacy’s Fortress Monroe Stereoscopic Views.”

The views displayed here date to this period. They may illustrate some of the early difficulties experienced by the 5th in acquiring satisfactory Zouave uniforms, which were described as “shabby” and “almost worthless” by Alfred Davenport in his 1879 book, Camp and Field Life of the Fifth New York Volunteer Infantry.

The uniforms, which had been supplied to most of the regiment by May 7, 1861, were based on the traditional dress of the Franco-Algerian Zouaves, rather than the pattern popularized in 1859 by Elmer E. Ellsworth and his U.S. Zouave Cadets of Chicago. Most of the early volunteer Zouave companies and regiments were directly influenced by the famous Chicago outfit and tended to opt for modifications of the Ellsworth uniform. That worn by the 5th more closely resembled the dress of European Zouaves. It consisted of a fez of red felt with blue tassel wound with a white turban that also served as a havelock for full dress occasions; dark blue jacket with appliqued tombeau and trefoil of red worsted tape with false pocket; dark blue vest with wide band of red trim at the front; red baggy breeches with blue looped cord trefoil decoration on the outer seam; red sash trimmed with light blue tape and inverted “V” at each end, and white canvas leggings.

The New York City firm of Devlin, Hudson & Co. supplied most of the jackets, vests, breeches and sashes, while William Seligman & Co. provided an additional 209 sets of uniform. The Seamless Clothing Manufacturing Company at Matteawan, N.Y, produced the fezzes.

According to contemporary accounts, the Devlin, Hudson & Co. clothing caused the most problems. In a letter to Col. Duryée dated May 8, 1861, in response to complaints about the uniform supplied, a representative of the firm prevaricated about its quality, stating, “We regret exceeding the dissatisfaction that exists in relation to the uniforms furnished by us for your regiment and are anxious to settle it in some manner satisfactory to you … The difficulty as we understand it is with the pantaloons at the part of the leg where they are fastened & fall over the gaiter. We think that a comparison with the pair left with you for a sample will show that these are according to agreement. We have also been informed that many of your men wear the uniform pants over others, which will of course destroy the fit.”

Following a visit to the camp of Duryée’s Zouaves at Fortress Monroe on July 14, 1861, London Times correspondent William Russell commented, “But for the ridiculous effect of their costume the regiment would have looked well enough; but riding down on the rear of the ranks the discoloured napkins tied round their heads, without any fez cap beneath, so that the hair sometimes stuck up through the folds, the ill-made jackets, the loose bags of red calico hanging from their loins, the long gaiters of white cotton–instead of the real Zouave yellow and black greave, and smart white gaiter–made them appear such military scarecrows.”

Russell’s observations reflected the toll of two months of camp life and campaigning, including a fierce fight at Big Bethel on June 10, 1861. Regimental historian Davenport supported Russell’s assessment in a diary entry written after the 5th left the Peninsula for Fort Federal Hill in Baltimore: “Passes were given occasionally, so that men could visit the city, but only for two hours; and the men looked so shabby, some of their uniforms being almost worthless, they were ashamed to make their appearance in a civilized community.”

On Sept. 10, 1861, the regiment received new uniforms of similarly poor quality. Little is known about them. According to a brief report in the September 13 issue of Baltmore’s The Sun, these were simply described as new “scarlet Zouave uniforms.”

The quality issues were detailed by the regiment’s colonel, Gouverneur K. Warren, to Col. David H. Vinton, Deputy Quartermaster-General for the U.S. in New York City. Warren explained that the breeches were “not nearly large and full enough,” and the lining of the jacket made of “stuff not shrunk,” so that wetness pulled the garment out of shape.

In February 1862 an improved outfit was issued. Still, the regiment continued its struggle to achieve the appearance of the true European Zouave throughout the remainder of its two years of service in Virginia and Maryland.

Ron Field is a Senior Editor of MI.