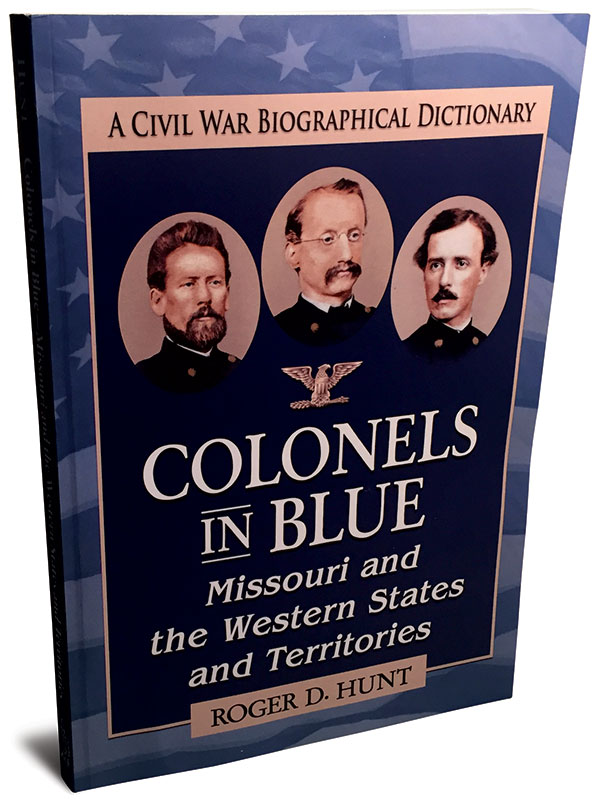 Among the Civil War’s most exclusive fraternities is Union soldiers who wore the spread-winged eagle on their shoulder straps: colonels. These individuals set the tone for the fighting abilities and the esprit de corps of their regiments. They bore the weight of responsibility for the health and wellbeing of their command, and carried the mantle of leadership into the heat of battle. Their character, for better or for worse, could inspire or repel the men in the ranks.

The faces and stories of these leaders has been the longtime focus of Roger D. Hunt and his Colonels in Blue series, the ultimate biographical dictionary on the subject. His seventh volume, documenting colonels from Missouri and the Western States and Territories, is now available. The book includes Missouri (with more than 225 entries), Arkansas, California, Colorado, Kansas, Louisiana, Nebraska, Nevada, New Mexico, Oregon, Texas and Washington. The copious research is consistent with Hunt’s other volumes, and a tribute to his dedication.

Each entry is organized in three sections: A timeline of key events in the officer’s military history, particulars of his life, education, occupation and death, and references. The last named section is especially valuable to students and scholars seeking primary source material.

Colonels in Blue is an authoritative, timeless reference and a must-have for anyone who studies the Civil War. (Hunt is currently finishing the last volume in the series, colonels of U.S. Colored Troops, staff, Regular Army, Marines, Sharpshooters, and the Veteran Reserve Corps.) 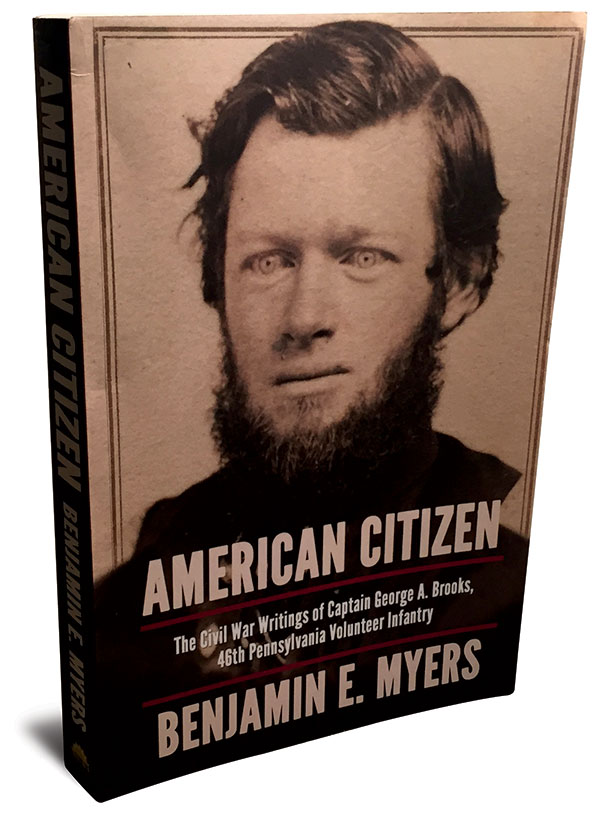 Captain George A. Brooks stares somewhere beyond the reach of the camera’s lens in the wartime photograph that graces the cover of American Citizen. His piercing, bright blue eyes, constrained mouth and thick beard leave an impression that he peers off towards a distant horizon, contemplating his future in an America gone mad with war.

Brooks might just as easily have been reliving his past. The author of this volume, Benjamin E. Myers, tells the story of the captain’s life leading up to the war. Financial failings. A love affair. A suffering wife and son left behind. Myers devotes the vast majority of this impressive volume, however, to Brooks’ war service, which provides him with a steady, stable existence in the midst of a most unstable period. Myers brings Brooks’ life into sharp relief through the captain’s diary, correspondence and newspaper articles. These primary sources, and Myers’ deft handling of the material and well-crafted prose, resurrect Brooks’ life and that of his regiment, the 46th Pennsylvania Infantry.

Myers is no stranger to the MI audience. His contributions, notably a fresh examination of the often-overlooked Brig. Gen. Alpheus S. Williams, reveal his keen ability to put a soldier’s life in context to his war service. The author also connects to the 46th through his great, great, great grandfather, Elias Boyer, who served in Company D of the regiment.

Organized in 14 chapters and illustrated with relevant maps, photographs and other elements, this story of an American citizen soldier is a worthy and recommended read.

Four years ago, when MI reviewed the first volume in the Civil War Hard Images series, we emphasized the unique 50-point scoring system developed by its authors. That book, focused on Confederate ambrotypes and tintypes, celebrated the distinctive portraits of Southern soldiers.

Ben L. Pauley and Chris Anderson have released the second volume in the series, dedicated to soldiers who served the Union. If a fan of the first book, you will be equally impressed with this one. The number and variation of images—from humble privates in standard uniform and accouterments to a Zouave with a red-tinted fez—is reminiscent of walking through a Civil War show, or scrolling through pages on your favorite dealer and auction sites.

The authors have enhanced the viewing experience with enlargements of important details. Also included, the aforementioned scoring system composed of six visual criteria: Brightness, clarity/resolution, condition and content are scored at 10 points each, and size and identity/record receive five points each. All scoring systems have an element of subjectivity. This one is no exception. It does, however, provide a baseline from which all images—including yours—may be judged. It also reminds would-be image buyers to thoughtfully evaluate an image before committing to a purchase.

While a book by collectors for collectors, others can appreciate Civil War portraits as well. Many readers will also recognize Pauley’s name and company, Soldier Collectibles.