I have very ill feelings—to put it mildly—for those who have brought this next scourge upon the Civil War CDV collecting market. As if it isn’t already hard enough to detect if the actual carte de visite that you view is real, now the fakers are faking an element that always drives the price of any image higher—the ink identification.

Old paper and modern ink do not get along

Let’s take a look at a fake modern ink identification: “Ivory Leach, 2nd Company Mass. Vol. Sharpshooters.” A well-known, and now deceased, image dealer from the East Coast sold this image. A collector bought it sight unseen from his catalog for a considerable sum of money. Upon receipt of the image, the collector thought it looked very suspicious, so he sent it to me for review. Here is what I found:

Now that we know why it was done, here’s how you can tell it is a fake. The dead giveaway is the bleeding effect of the ink around each letter, which indicates the signature was added with modern ink. Regardless of what a dealer or fellow collector may say, it is an established fact that modern ink applied to old paper almost always bleeds like this. The exceptions are ballpoint pen and certain markers, which a knowledgeable faker would not use because they are easily recognized as modern ink.

A forgers’ weapon of choice for this kind of work is the modern “antique” fountain pen, and they use them for adding fake ids to books, documents, images and etc. The infamous forger Mark Hoffman eluded detection for a long time because he found a way to stop the bleeding effect by adding a certain chemical to the ink (a great story, check it out on the net). It took the FBI quite a while to figure this out after he became a suspect in bombings in Salt Lake City. Bottom line: Old paper and modern ink do not get along.

The next thing I want you to look for is the consistency and the color of the ink itself. Notice the different color blotches, not noticeable to the naked eye, but very obvious under magnification. The fake signature is jet black, not brown. The only signatures of the period that are still black are ones that have not been exposed to air for any great length of time. This is the exception, not the rule. In the scan of the authentic id you will notice the beautiful texture and brownish color of old authentic ink.

Finally, notice the single line in the center of the signature instead of the double line of the normal quill pen from that period of time. Compare the fake Leach signature to an authentic period signature—in this case, Lt. John H. Carter of Company E, 4th Massachusetts Cavalry. This double line of the period quill pen is visible as outlines around the letters. No bleeding of the ink around each letter. Have a good look and learn. 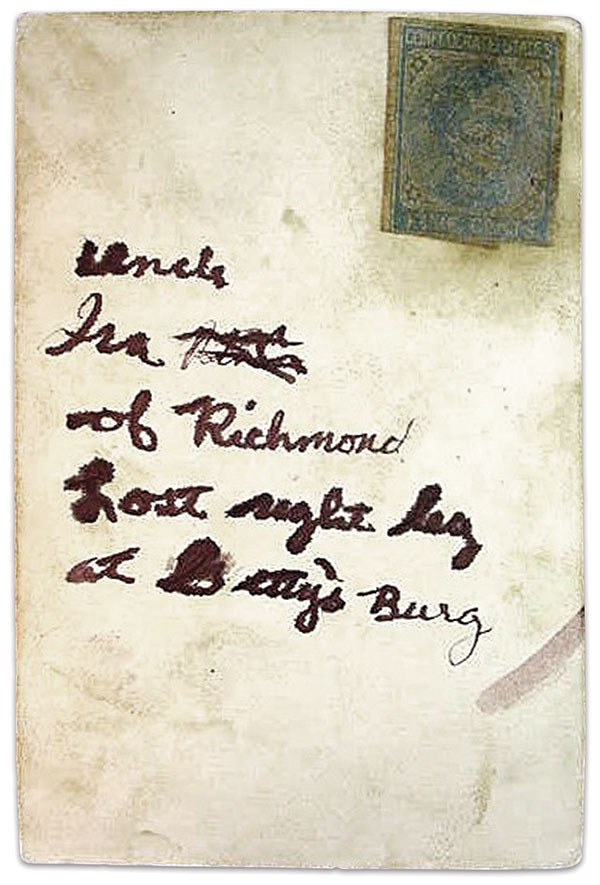 Here is an obvious modern attempt at a period id, trying to make a Union soldier CDV into a Confederate by adding the stamp and fake id. Not only is the bleeding effect evident, but also the cursive writing shows a feeble attempt at period penmanship. The forgery is so transparent that it is a joke to experienced dealers and collectors. But we were not the target audience for this CDV. The faker who made this targeted very inexperienced collectors. Unfortunately, this time the faker found a buyer in an online auction. It brought many times the value of what an unidentified Union soldier would usually fetch. That’s why they do it, folks.

I can never cover all the fakes that you will run into. In fact, just thinking about it can remove some of the joy of this hobby. I hear that from some customers. This being the case, my goal for this column from the start has always been to assist you in growing your situational awareness, or as I call it your “fake radar.” The list of what to be aware of is ever growing, but so is that feeling in your gut that warns you to tread carefully if you have been reading these articles for the past year. From the feedback I’m getting, I’m being told stories from collectors who have avoided the bad purchase at a show or online auction. Some collectors now ask more questions of the dealers, and demand accountability if they buy an image and later discover it a fraud. These may be Orwellian times, but I’m sensing the CDV market is adjusting to the new standards demanded by you, the customers. This truly is an amazing hobby we are all part of! Until next time.

Perry Frohne is the owner of Frohne’s Historic Military. He has been investigating fake images for more than 20 years. He is an MI Senior Editor.