What makes a Civil War photo identification truly airtight? If a soldier portrait is unidentified, we often consider the gold standard as locating an identical (or very similar) view of the soldier, which has already been identified, perhaps in a reference book or museum collection. But how can we be sure these reference sources—even the most reputable ones—are accurate?

In previous columns, I have shown how even professionally maintained state and federal archives can have errors in their collections. These errors can throw off even the most diligent photo sleuths. They also raise a question of where “truth” really comes from in Civil War portrait identification. We will delve deep into this question by examining which information sources are more or less trustworthy.

A survey of identification sources

To begin, I brainstormed as many different information sources as I could think of that provide information about a Civil War portrait’s identity. I ended up with 18 different source types and grouped them into three broad categories.

Next, I wanted to understand how the Civil War photo community thinks about the trustworthiness of these three categories of identification sources. I created an online survey asking respondents to rate the trustworthiness of each of the 18 sources on a 5-point scale, ranging from “very trustworthy” (5 points) to “very untrustworthy” (1 point). I posted the survey in the “Civil War Faces” Facebook group and the “Civil War Photo Sleuth” Facebook page and collected 32 responses over a couple of days.

The survey respondents were representative Civil War photo sleuths. Half rated their photo sleuthing expertise as intermediate, a quarter considered themselves experts, and the remainder novices. They owned an average of 680 Civil War photos (max: 10,000), and had personally identified an average of 85 (max: 1,000). About half the group was younger than 55 and half older, and all were male.

The results can be grouped into three categories: high-, medium-, and low-trust sources.

High-trust sources scored an average of 4.0 or higher out of a possible five points for trustworthiness. These sources tended to be historical (i.e., created during the Civil War era) or scholarly in nature. 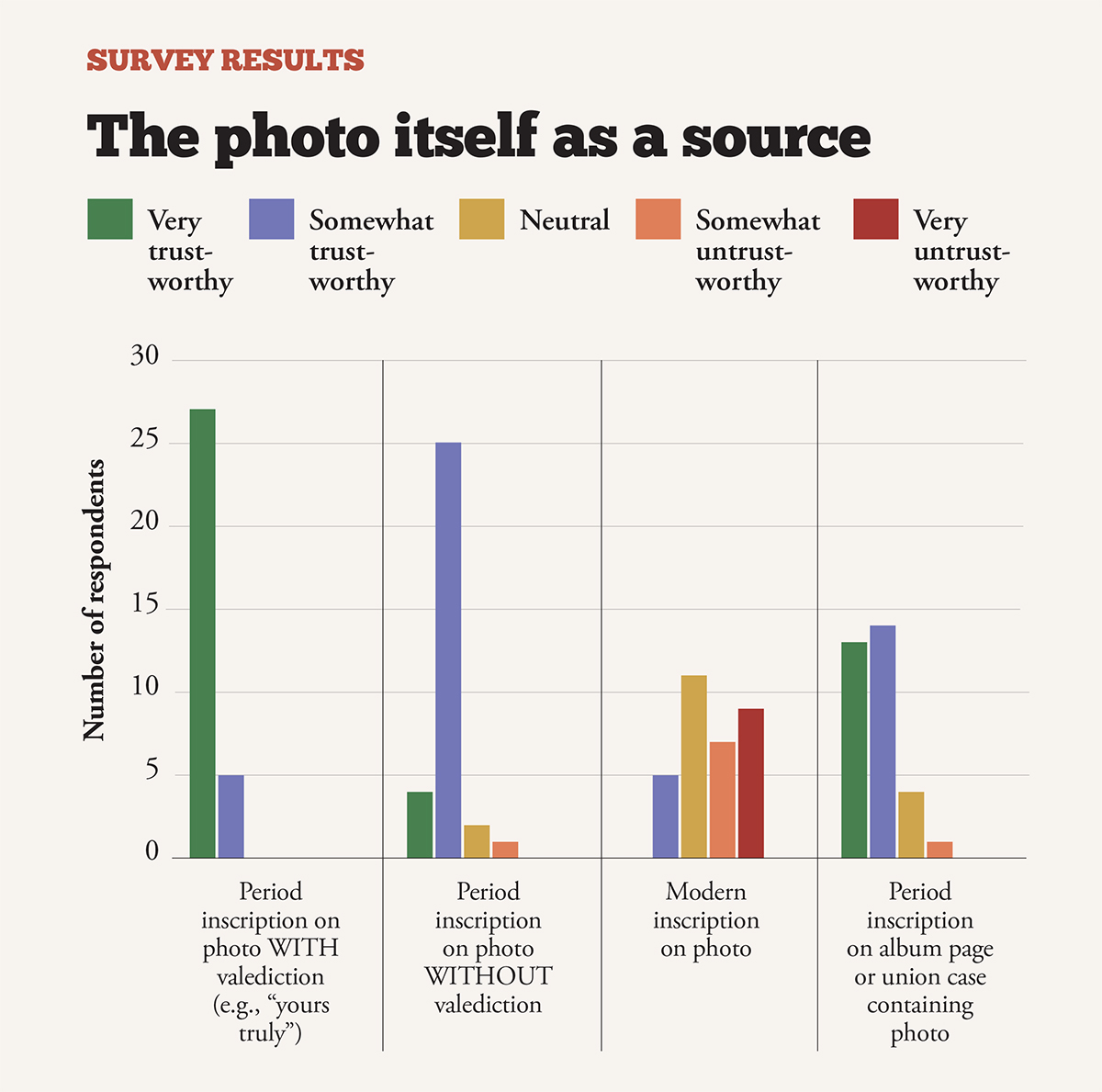 The single most trustworthy source among all 18 options was a period inscription with valediction (e.g., “yours truly”), scoring an average of 4.84 out of five. Furthermore, this source had the strongest consensus, with 27 of 32 respondents rating it “very trustworthy.” If a gold standard exists for a trustworthy Civil War photo ID, this is it. One respondent added, “Especially when you can compare the signature to other documents (war dated orders, pension applications, etc.). There’s no doubting then.”

Respondents made clear that the valediction makes a big difference. A period inscription without valediction scored much lower, 4.0. This decrease seems to reflect the ambiguity of a name scrawled on the back of a carte de visite—it could as easily be the intended recipient of the carte as its subject. Surprisingly, a period inscription on an album page or union case containing the photo scored slightly higher, at 4.22. I suspect this difference can be mostly attributed to the common practice of identifying hard images based on notes contained within the accompanying case.

Two scholarly sources—modern printed publications and websites run by a library, archive, or museum—both scored well, at 4.03 and 4.25, respectively. These scores suggest that the community holds in high regard the expertise of published authors and museum professionals, as well as the robust research, editing, and curation methods they employ to ensure accuracy.

However, identifications based on period publications (e.g., a regimental history) rated higher than either of these modern sources, with a score of 4.63—the second-most trustworthy source in my survey. Most Civil War-era regimental histories were authored by men who had served alongside their comrades pictured in the book. As one respondent put it, “The original author(s) … were the primary actor/witness as to whom the individual actually is/was,” and had “firsthand knowledge.”

Medium-trust sources scored between 3.0 and 3.99, on average, out of a possible five points for trustworthiness. Most of these sources were websites specializing in historical content contributed by knowledgeable enthusiasts.

The two most-trusted website sources cater specifically to the Civil War photo community: civilwarphotosleuth.com (CWPS) and civilwardata.com (HDS), scoring 3.91 and 3.84, respectively. Both sites host tens of thousands of identified Civil War portraits. But unlike the high-trust sources, anyone can submit a photo and claim an identification on these sites, with little or no vetting for accuracy. One respondent explained that “anyone can say that image they uploaded is that person with no evidence or verification.”

Next in line were auction house websites (e.g., Cowan’s or Heritage Auctions), scoring 3.72. These companies often employ researchers to identify Civil War portraits and write detailed descriptions for their listings. Dealer websites, often more transactional than informational, were viewed as somewhat less trustworthy, with a score of 3.48.

Genealogy websites like Ancestry.com and Find-a-Grave scored 3.69. While users of these sites can be quite knowledgeable and passionate, they mix historical records with user-generated content, opening them up to the same quality concerns as CWPS and HDS. Additionally, their broader focus on general family history means that Civil War expertise may be in shorter supply than on the aforementioned sites, resulting in lower trust scores.

The final medium-trust source was not a website, but a technique: matching to a different photo based on facial similarity, scoring 3.50. Facial matching can prove a powerful identification technique when the soldier’s face has unique features and in combination with other contextual clues, such as uniform details. However, it is also a subjective process that requires skill, and is vulnerable to confirmation bias; two reasons it may have earned a middling score.

Low-trust sources scored an average of 2.99 or lower on the 5-point trustworthiness scale, and were diverse in type. The highest-scoring source in this category was using only military records and other textual documents (i.e., no photos). For example, Andy Hall tentatively identified Harry Henry as the first sergeant in the famous group portrait of Company E of the 4th U.S. Colored Infantry by cross-referencing the photo’s date, Henry’s compiled service records, and even his height at enlistment. However, this technique’s lack of visual confirmation leaves many respondents uneasy. One wrote that it “has the lowest trustworthy factor” because it “requires the researcher to have an almost exact set of details to match up with official records to get a positive identification.” 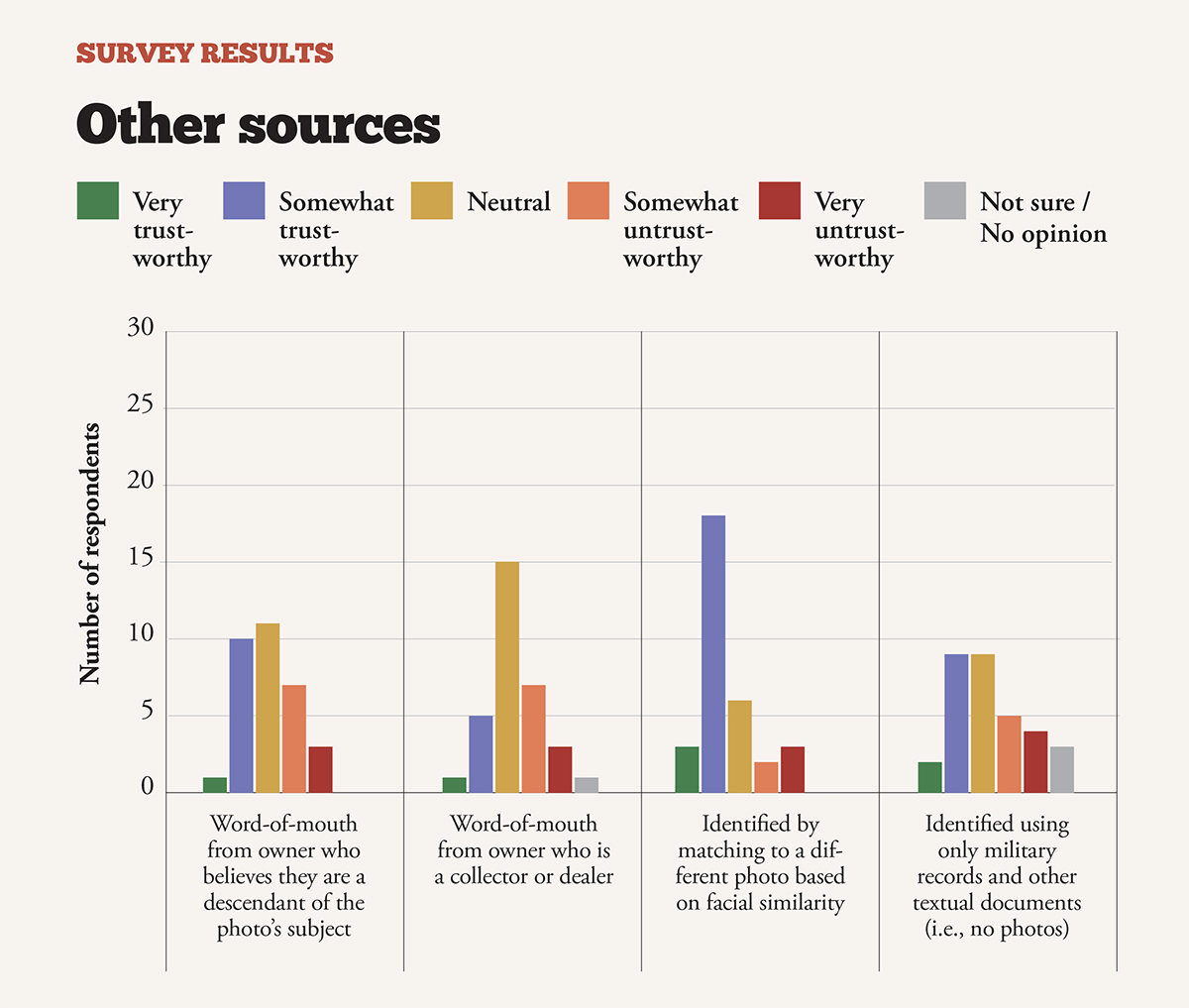 Word-of-mouth identifications scored low for descendants of the pictured soldier (score = 2.97), but even lower for dealers and collectors (score = 2.81). Many respondents reported “shaky experiences” with “aggressive collectors” and “untrustworthy CW image dealers” whose profit motives may lead to low-quality identifications. One respondent wrote, “Word of mouth from a dealer, who himself got it word of mouth from another source (i.e., family, picker, etc.). Unless there’s nothing special about the soldier’s service, the temptation to ‘embellish’ especially in this day and age, is too great.” The same respondent added: “Note that this also depends greatly on the dealer.”

Similarly, social media (e.g., Facebook) and eBay listings scored low, averaging 2.88 and 2.84, respectively. For social media, the main objection seemed to be lack of oversight. In one respondent’s words, “Facebook is the least trustworthy… there being no governing body. It’s nearly all opinion at best.” Respondents saved their strongest words for eBay listings, with several describing “first hand” experiences with sellers faking identifications by writing on photos.

The least trustworthy identification source, by a substantial margin, was a modern inscription on the photo, scoring just 2.38. Many respondents expressed wariness of such inscriptions, especially the possibility that they were added simply to increase the monetary value. Remarkably, photo inscriptions represented the most- and least-trustworthy sources across the entire survey, the key difference lying with whether they are period or modern.

Demand evidence. No good reason exists to accept an identification without evidence. If someone claims a certain ID for a soldier portrait, they must provide a convincing explanation to back it up. Don’t allow emotion to substitute for facts, and beware of financial motives behind identifications based on strong assertions alone.

Yet, an unsubstantiated claim of an identity, such as from a potential descendent of the soldier, should not be wholly ignored. Like Wikipedia articles, they best serve as the starting point, rather than the conclusion, of a thorough investigation.

Prefer trustworthy sources. Our survey showed that there are many types of identification sources, and the community considers some much more trustworthy than others. The survey results largely map onto scholarly notions of primary versus secondary sources. At the top of the list are historical primary sources like photos with period inscriptions and regimental histories published during the Civil War era. These identifications were made by the subjects themselves or close associates. As we go further down the list, into the murkier territory of secondary sources, websites with user-generated content, and word-of-mouth claims, we should grow increasingly skeptical.

Corroborate across multiple sources. The strongest identifications come from corroboration across multiple sources. If two sources conflict, give greater weight to the more trustworthy one. For example, in the Winter 2019 issue of MI, I showed how a museum’s online archive—considered among the most trustworthy sources, according to my survey—misidentified an Illinois officer by relying on an erroneous modern inscription; the least trustworthy source in the survey. The correct identity was determined by comparing to a photo with a period inscription and corroborating with a portrait published in a biographical dictionary in 1900.

In summary, identifying Civil War portraits requires photo sleuths to go beyond finding a source with a name. We need to ask, where did that name come from? How trustworthy is this source and the other sources it relies upon?

We are now exploring ways that our Civil War Photo Sleuth (CWPS) website can make it easier for users to answer these critical questions. For example, when users identify a photo, they could be asked to specify the type of sources they used (e.g., period inscription, modern book, word-of-mouth). This categorization could help other users assess the trustworthiness of the ID in conducting their own research. We are also experimenting with new interface designs displaying the chains of provenance created when users identify photos, based on other photos on the site. Ultimately, our goal is to make CWPS a high-trust source on par with museum collections and scholarly publications, by improving the quality and transparency of identifications on the site.

2 thoughts on “How to Trust the Worthiness of an Identification”