Photographer Edward Anthony and his assistants set out from their Broadway studio in New York City on the morning of July 4, 1860, with a grand purpose. Anthony planned to turn his lens on the New York State Militia as it marched from Broadway to City Hall Park as part of the Independence Day parade. 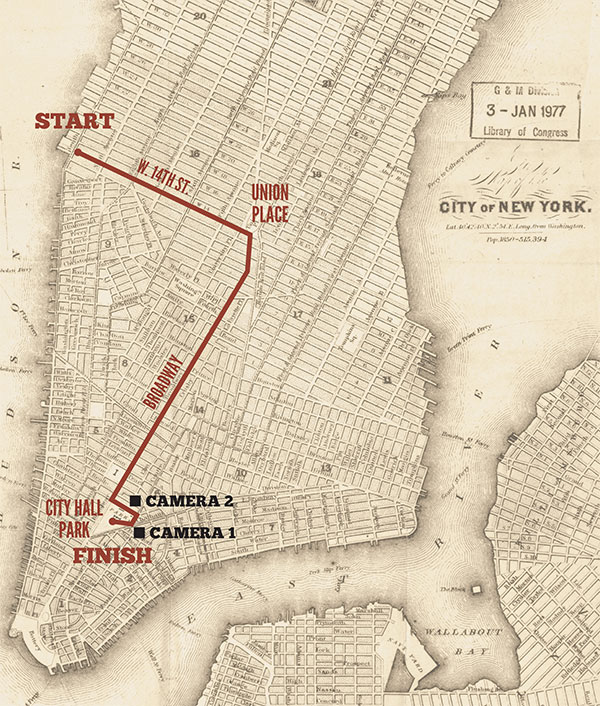 Anthony placed his cameras in two locations. A study of period maps suggest that one must have been placed in an upper story window of the New York Times offices. From this vantage point, citizen soldiers entered Center Street from Chambers Street, and then turned right into City Hall Park, where they marched past Mayor Fernando Wood with a salute. Seven of the nine images shown were taken here. Six images picture a man in the foreground dressed in a dark frock coat, light pants and straw hat. The figure in question may be Edward Anthony, who, like Mathew B. Brady, James F. Gibson and George N. Barnard during the Civil War, inserted themselves into the scene.

The other two images originate from a camera possibly placed on a first floor windowsill, or on a temporary platform or scaffold, outside the warerooms of Kirtland, Bronson & Co., manufacturers and jobbers of clothing at Nos. 45 and 47 Chambers Street.

Throngs of parade-goers added to the excitement. The New York Herald reported, “Early in the morning the air reverberated with the strains of martial music attending the various military companies and regiments … As the troops pursued the route of march, the sidewalks and door stoops, the windows of private houses and stores, from the first floors to the roofs, contained all classes and conditions of spectators … and this, added to the good order preserved by the police, made the affair a very grand scene.”

Against this backdrop, Anthony and his team produced a landmark series of photos of the four brigades of the First Division. The stereoviews provide a fascinating glimpse of antebellum life in New York City, and illustrate the powerful support that existed among the population for its citizen soldiery.

These images also documented soldiers, many of whom in less than a year’s time answered the call to defend the Union with the eruption of the Civil War. The units included hussars, kilted highlanders, artillerists, and the elite National Guard of the 7th New York State Militia.

The crowd gathers with street vendors setting up stands and stalls either side of a metal rail fence, and along the eastern edge of City Hall Park. Some onlookers raise parasols and umbrellas for protection from what a New York Times reporter described as the “tropical heat of the day.” A horse-drawn red streetcar of the Astor House, 4th Avenue, N.Y. & Harlem Rail Road runs in the foreground.

The prominent columned building, the Hall of Records, dates to colonial times. Built in 1757 as a Provost Prison, British Crown forces incarcerated captured American Patriots during the Revolution. It was demolished in 1904.

A column waits to be reviewed by Mayor Wood and the Common Council in front of City Hall (not visible). Two stopped streetcars close off the parade route lined with spectators.

A single rank of the Engineer Corps of the 71st New York State Militia (American Guard) led the column. Immediately behind them stands Dodworth’s Band, which enjoyed a national reputation. Formed by Thomas Dodworth in the 1830s, the musicians were led by Harvey B. Dodworth. A year later, after the war started, the band served with the 71st for a three-month enlistment. First stationed at the New York Navy Yard where it gave regular concerts, the band accompanied the regiment to Virginia and participated in the First Battle of Bull Run. During the engagement, the large bass drum visible here was abandoned on the battlefield and later retrieved.

Behind the band stand stand orderly rows of the 71st, its members distinguished by dark blue coats and white summer pants, white leather cross belts and National Guard pattern dress caps with light blue and white worsted pompons. The regiment’s beloved commander, Col. Abram Slingerland Vosburgh, led his men to Washington less than a year later. On May 20, 1861, soon after its arrival, Vosburgh died after a brief illness at age 35. A mile-long funeral cortege accompanied his remains through the streets of Washington to a train bound for New York City, where stunned citizens mourned his passing.

The 3rd New York State Militia (Hussars), commanded by Col. S. Brooke Postley, brings up the rear of the First Brigade. A wagon parked on the corner had been removed to clear the parade route. Dust kicked up by the horses lingered in the heat of the day, but does not obscure store signage along the Tryon Row Buildings in the background. Of note is the sign for the Freeman’s Journal, a weekly newspaper of Catholic origins that supported Mayor Wood.

The Hussars consisted of 10 squadrons of 24 men each. They wore dark blue jackets trimmed in yellow, and fur caps with blue-tipped white feather plumes. The 3rd was the largest cavalry regiment in the state, if not the Union. Troop C, commanded by Capt. George W. Sauer, served for three months in 1861.

A boy marches ahead of a section of the Second Brigade as it rounds the corner from Chambers Street into Centre Street and then Park Row in this view playfully entitled “To the Right—Wheel.” These troops belonged to the 6th New York State Militia (Governor’s Guard), commanded by Col. Joseph C. Pinkney. Behind them roll the guns and limbers of the State’s 4th Artillery, NYSM, commanded by its colonel, Edward Hincken.

The men of the 6th wear the regimental uniform adopted in 1858: Dark blue frock coats with scarlet facings and trimmings, dress caps with long scarlet worsted pompons, and white belts.

Leading the Third Brigade was the 7th New York State Militia (National Guard), by far the largest regiment on parade. A portion of its 560 officers and men march along Chambers Street towards Centre Street in view of Anthony’s second camera. The soldiers may have been showing off by “Changing arms on the Slope” as they marched.

The mounted officer in the foreground is likely Maj. William A. Pond. He commanded the regiment as his superiors, Col. Marshall Lefferts and Lieut. Col. Edgar M. Crawford, made arrangements for going into camp on Staten Island on July 6.

Composed of the elite and wealthy of New York City, the 7th enjoyed a reputation as one of the best appointed and drilled U.S. militia regiments then in existence. The men wear cadet gray tailcoats trimmed on the breast with three rows of National Guard buttons, and tails, collar and cuffs faced with black and gold. Long white worsted pompons top their dress caps.

Illustrating its popularity and size, Anthony’s cameras captured the 7th for a second time as the regiment turned into City Hall Park. The New York Evening Express reported its approach to City Hall. “Silence was preserved among the spectators until the arrival of this regiment in front of the saluting point, when a general burst of applause greeted each company as it came up.”

In this view, the officer of the second company closely watches his men as they close ranks and wheel to the right.

After the war began, the 7th mobilized for federal service for 60 days in 1861, three months in 1862, and 30 days in 1863. During the last-named call, the regiment assisted in containing the deadly draft riots on their home turf. A number of men from the 7th became officers in volunteer regiments, most notably Col. Robert Gould Shaw of the 54th Massachusetts Infantry.

The 11th New York State Militia (Washington Rifles) arrives on the scene with 495 officers and men—second in size only to the 7th. The regiment, commanded by Col. Homer Bostwick, led the Fourth Brigade along the parade route. Preceded by a single rank of Engineer Corps, Drum Corps and Hartmeyer’s Brass Band, the men are identified by blue frock coats trimmed with green and black and black-enamelled leather equipment. A lone militiaman, possibly overcome by heat, walks along the sidewalk.

During the Civil War, the 11th served for three months at Harper’s Ferry in 1862, and later for 30 days in 1863 to protect Harrisburg, Pa., from Gen. Robert E. Lee and his Army of Northern Virginia.

Frame 8/9: On Come the Highlanders

The parade ends on a colorful note with the dark blue, red-trimmed polka jackets, Cameron of Erracht tartan kilts, and Glengarry bonnets of the 79th New York State Militia. Known as the Highlanders for their Scottish heritage, the regiment negotiates the narrow turn into the park. A band precedes it, which may have been William Robertson’s. Six pipers of the Caledonian Club lead the way for the kilted column. Note the over the shoulder saxhorns carried by the band which were designed so that troops marching behind them could properly hear their martial airs.

The 79th served as volunteers throughout the Civil War and adopted U.S. regulation infantry uniforms. They participated in numerous campaigns and engagements, including the First Battle of Bull Run and the Battle of Antietam.

The crowd disperses from the streets and park following the conclusion of the parade. Some men gather around a beer seller, while others stand in conversation or stroll off to enjoy the rest of the last celebration of Independence Day before the Civil War.

This study is in memory of the late Michael J. McAfee, who provided invaluable advice in its preparation. Thanks also to Jeffrey Kraus, of Antique Photographics, who shared stereoviews from his extensive collection.

Ron Field is a Senior Editor of MI.