Zouave mania exploded across the country in 1860, following the tour of Elmer E. Ellsworth and his United States Zouave Cadets. Like phosphorus in a ship’s wake, new companies of Zouaves sprang up, not only in all 19 townships and cities where they displayed their drill, but also in countless other communities across the nation. While inspired by the original French Zouaves of the Crimean War, the drill uniform worn by the Zouave Cadets eliminated some of the traditional Zouave features such as the fez and full baggy trousers, and adopted a unique and somewhat plainer uniform known as the “cadet” style which, as copied by other units, more closely typified the American Zouave. 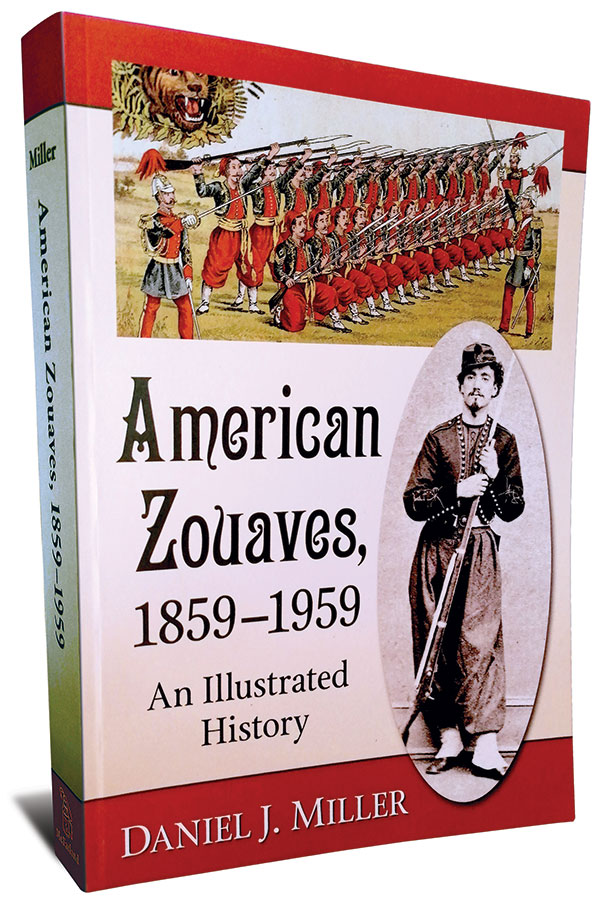 With the outbreak of the Civil War, Zouave style uniforms proliferated among militia and volunteer units as they hastily prepared for combat. Some, like the 5th New York Volunteers, or Duryée’s Zouaves, in the North, and the 1st Confederate States Zouave Battalion, or Coppens’ Louisiana Zouaves, in the South, attempted to copy the full uniform of the French Zouaves. From 1861 through 1865, hundreds of other Union and Confederate units continued to don full and semi-Zouave style uniforms with varying degrees of success, which carried on the Zouave tradition.

Certain books became milestones in our knowledge of Civil War uniforms. When the late Michael J. McAfee’s Zouaves…The First and The Bravest was published in 1979 as West Point Museum Bulletin No. 4, it presented for the first time a comprehensive study of the appearance and influence of Zouave uniforms from 1859 to 1865. With more images from his unique and extensive collection, this subsequently expanded in 1991 into a slim hardcover volume that remains a valuable reference on the subject of uniforms worn by Zouaves in the Union Army.

With the publication of American Zouaves, 1859-1959, An Illustrated History, Daniel J. Miller has taken the study of the Zouave and his uniform to an almost finite degree. Its release represents an even more important milestone in our understanding of this oft baggy-trousered warrior in his flamboyant uniform. The author states in his introduction an intention to provide collectors and historians with a reference aid in identifying the surviving images and historical artifacts related to Zouaves, and, in this extensive paperback illustrated with 442 mostly black and white images, he does just that.

As with earlier works on the subject, Miller considers in great detail what the original Zouaves, Turcos and mounted Spahis of the French Army wore from 1830. The bulk of the book is devoted to a comprehensive state-by-state catalog of every known American Zouave unit from 1859 to 1959 listed and described in alphabetical order, and fully referenced with comprehensive endnotes, all of which is richly illustrated with images from Miller’s own extensive collection. With the exception of a gallery entitled “Natty Glory” published in MI in Autumn 2016, most of these images have not previously been published. Miller not only expands on our previous knowledge of the culture and uniforms of the Zouaves of the Union Army, but also considers the Zouaves of the Confederacy.

Of additional value, he continues his study well beyond 1865 to the Zouave military tradition in the National Guard organizations and independent drill companies of the post-Civil War years and into the 20th century. To provide a balanced visual representation of both Northern and Southern Zouaves, it might have been pertinent to include images from other collections of units such as the Charleston Zouave Cadets. But Miller’s mission clearly showcases his own excellent collection, which the book does admirably.

American Zouaves is highly recommended and will become an essential reference work for collectors and a most welcome addition to any Civil War library.