Compared to most of the Union’s noted Civil War generals, John Fulton Reynolds rates high for skill and ability. West Point educated and a seasoned campaigner in Mexico and the frontier, his experiences placed him in an elite cadre of officers.

He ranks low, however, in the number of surviving photographic portraits.

The relative brevity of his Civil War service, cut short by a bullet during the early fighting at Gettysburg, prematurely ended a promising life and career. Also lost were opportunities for photographs. It is easy to imagine Reynolds, had he lived, posed with trusted subordinates at the end of the hostilities, in post-war images of him in various posts, and during his retirement.

One of the few surviving portraits of Reynolds is this likeness by daguerreian pioneer Jeremiah Gurney. One of photography’s early masters, he operated a sprawling gallery on Broadway in New York City.

The location of Gurney’s studio provides a key to dating this image. Reynolds’ military record places him in New York Harbor in 1853-1854. During this period, he served as first lieutenant with the 3rd U.S. Artillery in the garrison of Fort Lafayette.

A review of Edward J. Nichol’s meticulously researched 1958 biography, Toward Gettysburg, quotes a letter written by Reynolds to younger sister Eleanor, affectionately known as Ellie, on March 28, 1854. Having recently received orders dispatching him to new duties in the West, the letter included bits of news about his preparations and several promises. One of them was to sit for his daguerreotype before he left for the arduous cross-country adventure. 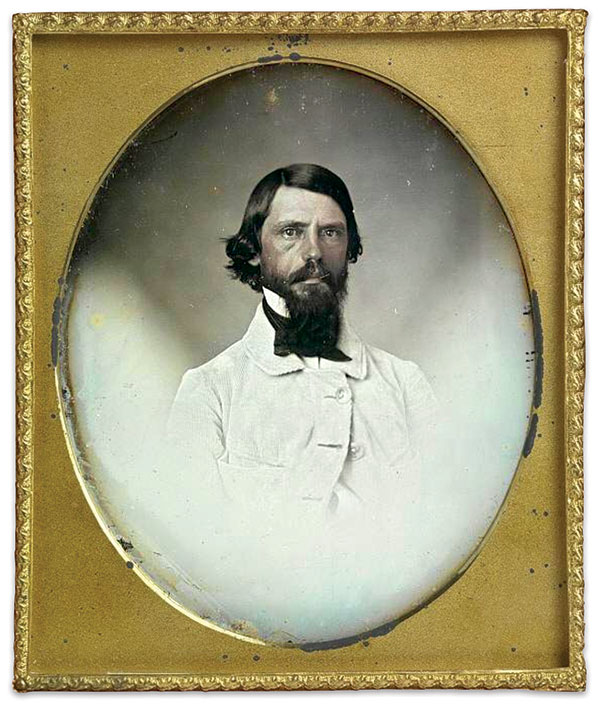 Could this be the portrait promised to his sister?

The National Portrait Gallery in Washington, D.C., holds another antebellum portrait of Reynolds. A circa 1858-1859 sixth-plate daguerreotype by an anonymous photographer, it pictures Reynolds with long hair and beard. The look is quite the opposite of the shorthaired Reynolds with a tiny tuft of hair hanging from his chin.

It is reasonable to conclude the National Gallery’s Reynolds portrait was taken after the clean-shaven image. Both photographs, by the way, contain notes written in the same hand that link them to the Reynolds family. Sister Eleanor outlived her brother by 60 years. She died in 1923 at age 87.