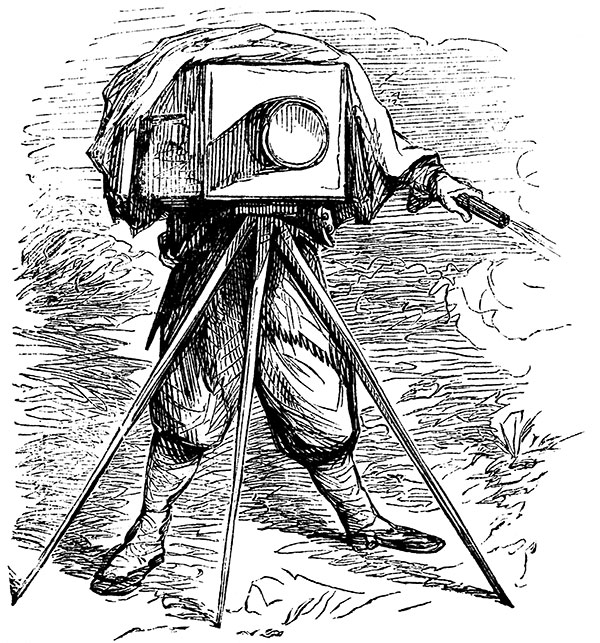 In these columns, I frequently emphasize the importance of community in Civil War photo sleuthing. Most of us benefit from the resources freely shared by other members of this community—photos, information and opinions. Many of us also contribute our knowledge and experience to help others, by publishing books and articles, presenting at events, sharing collections, and answering questions in online forums.

Yet, such contributions expend valuable time and effort that is rarely compensated, at least financially. Furthermore, some see Civil War photography as a competitive enterprise where assisting others can put oneself at a disadvantage. How can we reconcile these potentially conflicting attitudes?

For the past couple of years, I have been conducting hour-long interviews with experienced Civil War photo sleuths. These men and women range in age from 25 to 69, and represent 12 U.S. states—and counting. They consider themselves collectors, dealers, researchers, or some combination of these. To protect their privacy and encourage candid responses, I anonymize the names behind the quotations. But readers of MI will be familiar with their work.

I asked interviewees a variety of questions related to Civil War photo sleuthing. But this column focuses on why they share photos and information and—just as important—why they do not. My original motivation for these interviews was to identify user needs for improving our Civil War Photo Sleuth (CWPS) website. I hope that documenting these perspectives will be of broader interest in understanding our community’s values.

One of the most common motivations interviewees gave for sharing identified photos was helping other people. Sometimes, they have fellow collectors in mind. They might post an identified view of a soldier in case another collector, hoping to identify an unknown view, might stumble across theirs. One interviewee said, “I posted maybe six or seven identified ones. So if anybody has those images out there, the second image or a CDV or a later one, they have the ability to match it up to mine.” Another agreed, “Hopefully it’s going to help somebody else out there searching for what I might already have.”

A third likened his activities to helping solve a collective puzzle. “I want to help, and I believe in research and sharing. The more information we have, it’s like a big giant jigsaw puzzle that we’re gradually picking pieces up off of the street and putting them in the box. Before long, that puzzle will have enough pieces that it’s relevant, and we can put it together.”

Other interviewees have posterity in mind, keen to connect future generations to their Civil War ancestors. One contributor said, “I want these guys and faces to be put together to where somebody else, fifty years from now, will look at it and say, yeah, there’s my great, great, great grandfather, you know?”

Another group of interviewees shares identified photos because they wish to benefit from the same kind of help, if not necessarily from the same person. One explained, “I’m just trying to help other people out like I want me to be helped out.” Still other interviewees have already benefited from photos and information shared by other community members, so now they share their own materials out of a sense of duty. One said, half-jokingly, “As a way of giving back, I think I’m obligated to now.”

Curiosity motivates some interviewees to share their photos. One explained that, “I just uploaded to see if maybe there’s a collector out there that had the same image, maybe of a different pose or a different backdrop, different uniform.” Seeing another view of an identified soldier can illuminate new details about his life, and become reward itself.

Interviewees choose not to share identified photos for several reasons. Some worry that their photos will be republished or otherwise used without their permission. One interviewee said, “I have a lot of identified images that probably would help other people identify some of their guys. But I’m worried about putting them on there, only because I don’t want them using my stuff unless they get permission from me first.”

Other interviewees worry that posting high-resolution scans of photos online might make it easier for unscrupulous individuals to print and sell as counterfeits. One said, “I also worry with the technology people are getting these days, they’re falsifying so many images now, especially CDVs … It just is so worrisome that somebody will start bootlegging images off of somebody else.” Another agreed, “Look on eBay. Look at all the fakes … Look at the Library of Congress. You can download a file format, the TIF format where it’s high resolution. Then if you have a good printer, you print it out and you can make fake. Easy as that.”

“Interviewees emphasized the importance of sharing their photos and information, a goal that aligns with our motivations for creating the site.”

Interviewees also describe situations where they would avoid sharing a photo’s identification. One major concern is making a flimsy identification that later proves false. An interviewee explained, “I see guys trying to put names to images and there’s a lot of questions. If you have to sit there and explain your image, then I think, you know what, it’s probably not who you say it is.” Another recalled seeking feedback from fellow collectors on a potential identification, but a small minority of doubters led him to back off. “Although I had probably 80 percent of the folks that said it was a definite match, I had 20 percent who said it wasn’t. So those are really good odds, I think, but to actually tie the two together, I didn’t know if it was proper to do that.”

Another concern is that some identifications yield disappointing results, whereas an unknown soldier retains a desirable air of mystery. One interviewee gave the example of identifying photos of field-grade Union officers who turn out to command desks rather than regiments: “[People like me are] very interested to find out a major or lieutenant colonel because they’ll usually have a good history. Paymasters generally have no history and so therefore nobody wants them… They’re impossible to give away. You’re better off trying to sell an image of a paymaster unidentified than putting his name on it as a paymaster because nobody will buy it.”

Interviewees expressed a hesitation to share digitized Civil War photos if they do not own the originals. On the one hand, most interviewees believe that owners of Civil War photos have no legal rights to prevent others from distributing copies. Some even describe a feeling of collective ownership or shared cultural heritage. One said, “I think that all of the images from the war should be public domain … I think that all of the images from this period of time, from the war, belong to all of us.”

On the other hand, some interviewees said that owners of Civil War photos should enjoy special privileges regarding sharing them. These are important social norms—in one interviewee’s words, “a community thing”—even if they are not legally enforceable. One such privilege is granting permission for reproduction. An interviewee said that if a collector wants to approve any requests to publish his or her photos, that desire should be respected. “I think since they are the keeper, this period’s keeper of those images, and that’s their wishes, that they should be granted them.”

Some interviewees see photos for sale in online auctions as a special case. One said, “I have a little bit of a hesitation in taking things from other people’s collections and then putting them [online] but if they’re on eBay or Cowan’s Auctions or something like that, I think it’s fair game.” Other interviewees feel that even auction photos should not be shared without permission. “I don’t think it’s right because someone’s going to end up owning that image. Somebody does own it to begin with, the seller owns it until the sale is complete, and then once it’s sold, I think you’re doing [a] disservice to the person that bought it.”

Another owner’s privilege that interviewees mentioned is attribution. If a photo is published anywhere, including on the Internet, some interviewees want to ensure the owner bears the proper credit. Interviewees favor a text caption as the form of attribution. One said, “It should be plain, simple, and clear. This is owned by, say, Kevin Canberg or Brian White…”

Watermarks, another form of attribution, make it harder to separate the photo from the owner’s name. Some interviewees avoid watermarks, however, because they harm the image quality. One recalled, “I used to watermark [photos], but the program I was using would degrade the clarity of the image, and I’m all about details.” Another said, “I hate putting ‘property of [my name]’ across the chest of the guy, or halfway across the face, saying that image belongs to [me] or Joe Blow or whoever. I think that distracts.”

One way we are using these interviews is to improve our Civil War Photo Sleuth (CWPS) website. Interviewees emphasized the importance of sharing their photos and information, a goal that aligns with our motivations for creating the site. But interviewees also expressed a desire for some control over what they share. Most want crediting when their photos are shared (but not with watermarks). Some also want to approve requests to use their photos.

To accommodate these needs, we are modifying our “Add Photo” interface, requiring users to provide a source attribution for every upload. We will also add features that allow users to signal how and when they would like to give permission and receive attribution. Additionally, we are exploring ways to give users fine-grained control over who can see their photos. Our goal is to continue to encourage all photo sleuths to share photos and information on our site, while respecting community norms and individual preferences around permission and credit.

More broadly, I hope these interviews shed light on the variety of attitudes in our community around sharing Civil War photos and information, and start a discussion about best practices and common ground. While photos sleuths have diverse opinions about sharing Civil War images, we all share a passion for discovering the stories behind them.