An unnamed aide to a Union general observed the favorable position occupied by federals along one section of the front line at Bermuda Hundred, Va., on May 18, 1864. At one point, Union soldiers in the ranks overheard him say, “The 97th P.V. would hold that line three weeks if kept supplied with ammunition.”

The aide referred to the 97th Pennsylvania Infantry, which had been ordered to retake ground lost to Confederates earlier that morning. The Keystone Staters obeyed the command, and drove the rebels back to a ravine, where they took refuge among a scattered group of buildings. From this position, they peppered the Pennsylvanians with musket fire.

The 97th responded in kind, and thus began a battle that escalated to a raging storm of fire that lasted nine hours, before darkness closed the contest. According to the historian of the 97th, “The ammunition, being several times exhausted, was replenished again and again from the rear; details of men, with gum blankets, into which the contents of the ammunition boxes were poured, crawled to the front dragging the supplies, which were thrown forward to those in the advanced sheltered positions, from which it was certain death to move while daylight lasted.”

One Pennsylvanian who braved the fire to deliver cartridges to his comrades was 1st Sgt. James E. Engle of Chester, Pa. At some point, he suffered wounds to his face, body and left arm, the latter of which surgeons amputated. Three months later, he accepted a second lieutenant’s commission and transferred to the 16th Veteran Reserve Corps, and ended the war with a captain’s brevet. 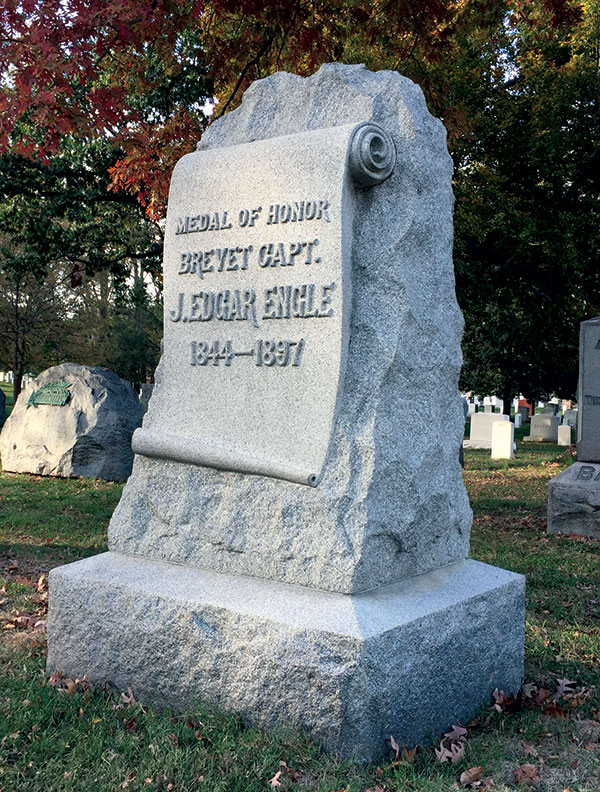 In 1896, he received the Medal of Honor for his actions on that May day in Virginia—the only man recognized among those who dragged gum blankets back and forth across the exposed battleground. Four other men in the 97th received the Medal for other wartime actions, including the regiment’s boy colonel, Galusha Pennypacker, who later became a major general.

Engle settled in Washington, D.C., and worked as Pension Bureau clerk. He died a year after he received the Medal.