John William Fenton brutally assaulted Tony Fisher inside a New Bern, N.C., saloon owned by Fisher, a free black man, on Dec, 15, 1864. According to witnesses, Fenton, a captain in the 132nd New York Infantry, entered the establishment accompanied by a prostitute and, unprovoked, created a disturbance that ended with the beating that injured Fisher.

One of the patrons that day happened to be the chief provost marshal. He charged Fenton with conduct to the prejudice of good order and military discipline, and conduct unbecoming an officer and a gentleman.

The latter charge stuck. Fenton was dishonorably discharged in January 1865—an ignominious end to a promising military career. A New York native, Fenton had started his war service in 1862 in Kansas, where he worked as a banker. He enlisted in the 2nd Kansas Cavalry as a commissary sergeant, but left to accept a second lieutenant’s commission in the 132nd. He spent the rest of the war in eastern North Carolina, where he rose to captain.

Following his dismissal, Fenton’s brother officers filed a petition for a withdrawal or suspension of the sentence, citing previous good conduct and the disgrace that would fall upon him, his family, and the regiment. 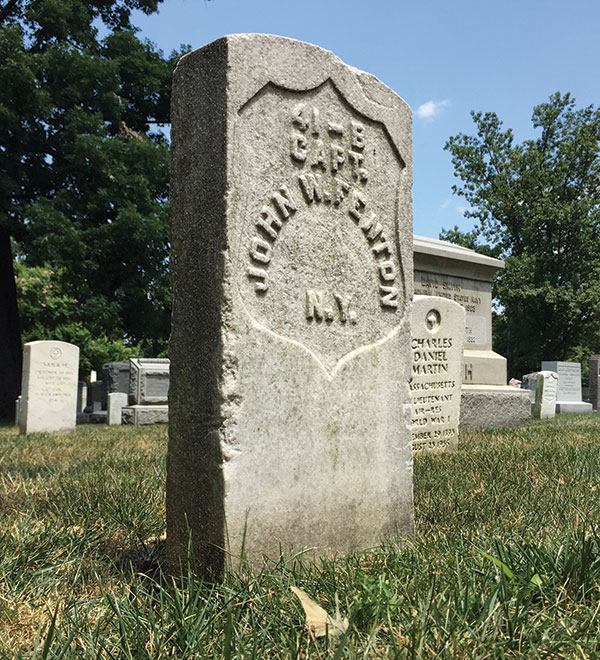 The petition worked. The War Department allowed Fenton to resign with an honorable discharge. He left the army with his reputation intact and wandered to the frontier, where he became trapped in a blizzard during the winter of 1865-1866. He suffered frostbite resulting in amputations of his left foot at the instep, and of all toes on his right foot.

Fenton returned east, settled in Washington, D.C., and went to work as a clerk in the Bureau of Indian Affairs. He lived until 1891, dying of pneumonia at age 53. He outlived his first wife, who had died in 1885. His second wife and two children survived him.