A half-dozen officers, all members of the 45th Ohio Infantry, enjoy pipes, cigars and wine. The pipe-smoking captain, seated second from the left, removes a cork from one of the wine bottles. Two enlisted men and a horse stand in the background. The Ohioans began their military service in the summer of 1862, and participated in the Knoxville and Atlanta Campaigns, and the Tennessee battles of Franklin and Nashville.

The sepia tones of this carte cannot diminish the twinkle in the eye of this federal first lieutenant with a pipe protruding from his mouth and beard. The generous bowl is perfect for a long smoke in camp. His tam o’shanter, Mexican-style spurs with large rowels and neatly folded gauntlets, completes the picture of an officer with a big personality.

A tent pitched along a tree line bordering a field provided a backdrop for this band of merrymaking Union officers with pipes, cigars and spirits. The man standing in the center of the three officers in the background is pictured in a more reflective mood in the top portrait. He is identified as “Lieutenant Thompson at Chattanooga,” in a version of this image published in the 1983 book Fighting for Time, the fourth in the six-volume Image of War series.

An officer of the 23rd New York Infantry sits with his extra-long-stemmed Calabash pipe outside his tent in camp at Arlington, Va., in 1861. The stem allowed more air to flow from bowl to mouthpiece, generally producing a cooler smoke. Sitting next to him is a man, likely a servant. Books, a wicker-covered cask, a campstool, the officer’s cap and a U.S. Model 1850 Foot Officer’s sword surround the pair.

The uncommonly long Tyrolean pipe complements this corporal’s extra-large chevrons. With origins in Europe’s Alpine region of Tyrol, this unique pipe is distinguished by its airflow, which is drawn through the bowl and a secondary passage before moving up the stem.

Wearing a full-bent billiard-style pipe and hat at rakish angles, this captain, who may have been on the staff of Maj. Gen. John G. Parkes, leaves a debonair impression. Rounding out his look is a silver-handled cane, U.S. Model 1860 Staff and Field sword, gauntlets, and high boots with spurs. He wears staff buttons on his coat, but is missing the common wreath insignia on his hat.

A soldier, left, holds a pipe with a smooth bowl and a long stem. His friend wears what may be an identification disc pin. The crossed sabers insignia on his cap indicates his service in the cavalry. The letters on either side of and below the sabers, “I,” “P” and “M,” indicate he was a member of the Independent Pennsylvania Militia. The number “16” above the sabers suggests he served in the 16th Cavalry, though there is no obvious connection to the 16th Pennsylvania Cavalry, other than the regiment trained at a camp near Harrisburg, where this portrait was taken.

The bowl of this federal enlisted man’s pipe rides along the stem like a motorcycle sidecar. The bowl extends from the side of the stem, which is connected to a handle. The soldier wears a scarf of thin material and has a cap perched on one knee.

This artillery first sergeant shows off two barrels: one attached to his pipe bowl and another that is part of his revolver—a .32 caliber Smith and Wesson Number 2. Note the wind-cap on his pipe and what appears to be a sack of tobacco protruding from inside his coat. Also of interest are the attachments for shoulder scales, which are missing.

This freckle-faced soldier seems impossibly young to be a soldier, let alone a sergeant. He wears an 1858 pattern fatigue blouse, and standard issue pants and overcoat. A folded-up newspaper article that accompanies the image dates to about 1868. The subject of the article is Rev. Albert Barnes, who was fairly well known for his abolitionist views during the war. How the article and the photo are connected is a mystery.

This Zouave in the 146th New York Infantry must have anticipated long periods of inactivity judging from the chimney-shaped pipe in his mouth. That wind-capped bowl could pack quite an impressive amount of leaf. He is ready for serious tobacco action with a smoking cap, rather than the standard-issued fez.

Armed with two classics—a bent pipe and a Model 1841 Mississippi Rifle, this soldier is ready for camp and campaign. He appears wearing only the cape of his great coat of an uncommon dark color.

The flat top of this soldier’s cap proves a convenient place to display his pipe. The bowl, still filled with ash, indicates that he recently finished a smoke. What he contemplated as he puffed his pipe is a mystery, though his concerned expression suggests he was working through a knotty problem.

These friends may be recreating the sharing of a last smoke together before the artilleryman, wearing a standard-issue shell jacket and a well-worn slouch hat, heads off to war.

It appears this pipe-smoking, plaid-clad civilian traded his fur gloves for the gauntlets of the Union enlisted man with a stogie between his lips. Judging from the thick fur, the soldier may have gotten the better end of the deal.

A good smoke and a good read appear to bring a smile to the face of this enlisted man. His generous bowtie, wide collar and shirt cuffs turned over his four-button sack coat add to his leisurely, comfortable look.

An engineer poses with his trusty pipe and an Enfield Pattern 1853 rifle-musket. 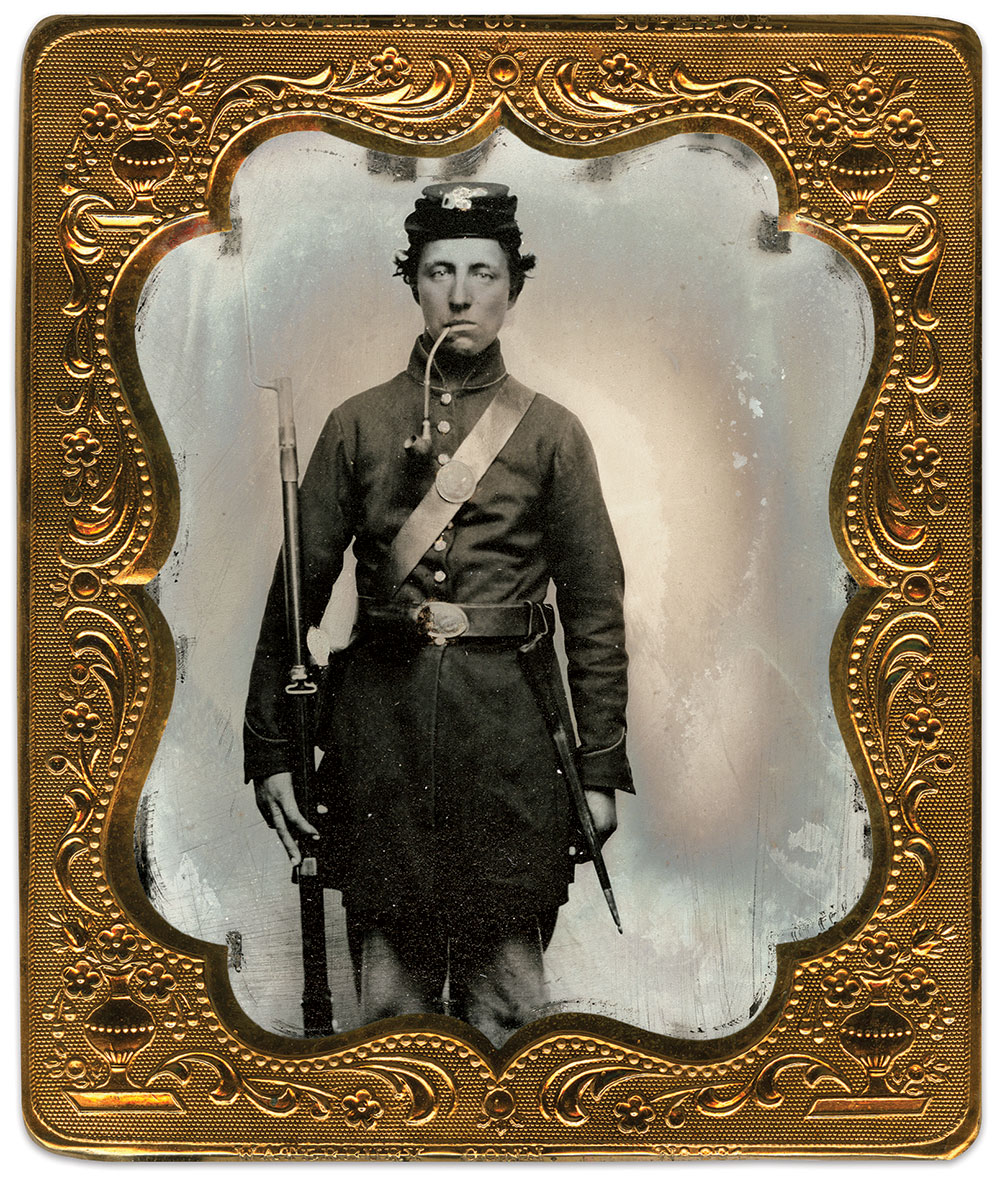 Pvt. Thomas Jefferson Moses of the 93rd Illinois Infantry wrote about pipe-smoking while at Camp Fuller in Rockford, Ill., in 1862. “I remember whil(e) at Rockford father com(e) to visit me. I had learned to smoke during this time. I remember father took my pipe and took a couple of whiffs just to see how it tasted. The first time I think he ever tasted tobacco. He was all ways opposed to the weed and I had never smoked but a few times.”

Moses survived the weed and the campaigns of Vicksburg, Atlanta and the Carolinas before he mustered out of the army in June 1865. This sixth-plate ambrotype, owned by great grandson, Tom Gaard, appeared in the May-June 1999 issue of MI.