Brad Quinlin has been forever touched by the courage of a World War II soldier. The GI, William Ralph Shockley, volunteered to stay behind and provide cover fire for his unit in the face of a Japanese counterattack in the Philippines on March 31, 1945. Shockley remained at his post long enough to allow his comrades to withdraw to safety, and, in doing so, made the ultimate sacrifice so that others might live. 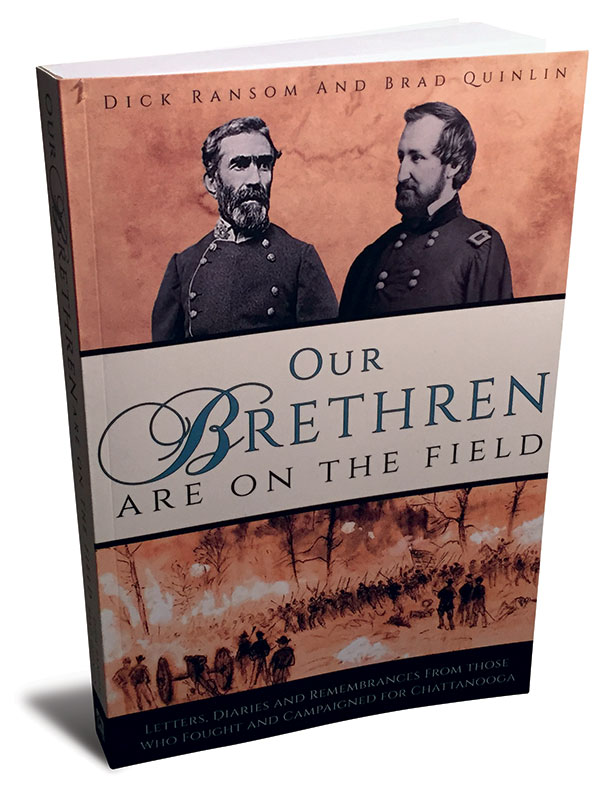 One of the men who owed his life to Shockley was Quinlin’s father, Paul, who had been wounded. He lived until 1984 with fragments of shrapnel in his body.

Shockley received a posthumous Medal of Honor seven months after his death.

Flash forward to the 21st century. By this time Quinlin had become a historian, genealogist and author of a number of Civil War books. When he learned about plans to open the Charles H. Coolidge Medal of Honor Heritage Center in Chattanooga, Tenn., in 2020, a personal project that would become Our Brethren Are On the Field was born.

All proceeds from the book, co-authored with Quinlin’s longtime friend Dick Ransom, will go to the new Center. “It’s a great read for a great cause!” exclaims a post on the book’s Facebook page.

In fact, the volume is quite impressive. Organized in five parts, the book touches on a range of events that involved Chattanooga and the surrounding region, all told through the words of 37 soldiers—21 of whom died during the war. The writings reveal details about the battles of Perryville, Stones River, Chickamauga and Missionary Ridge, as well as the campaigns of Kentucky, Tullahoma, Chickamauga and Chattanooga.

Charley Caley of the 105th Ohio Infantry wrote one of the Battle of Missionary Ridge letters. In it, he noted, “Never before did men fight with such fury as the rebels did to hold their fort. They even shook their flags in each other faces but it was of no use for they had to give back.” Caley suffered three wounds during the war.

Consider purchasing this book for Caley’s letter and the remaining wealth of primary source material—and help the Medal of Honor Center in the process.

Our Brethren Are On the Field: Letters, Diaries and Remembrances From Those Who Fought and Campaigned For Chattanooga
By Dick Ransom and Brad Quinlin
Softcover, 373 pages
Mountain Arbor Press$19.95
Buy it now