When I came into possession of MI in 2013, one of my first orders of business was to establish a presence on social media. Regular posts include sharing images, stories, news and information gleaned from a variety of sources. At some point along the way, I experimented with video posts on Facebook, as part of an effort to try different methods of spreading the word. Metrics revealed increased engagement with our audience. 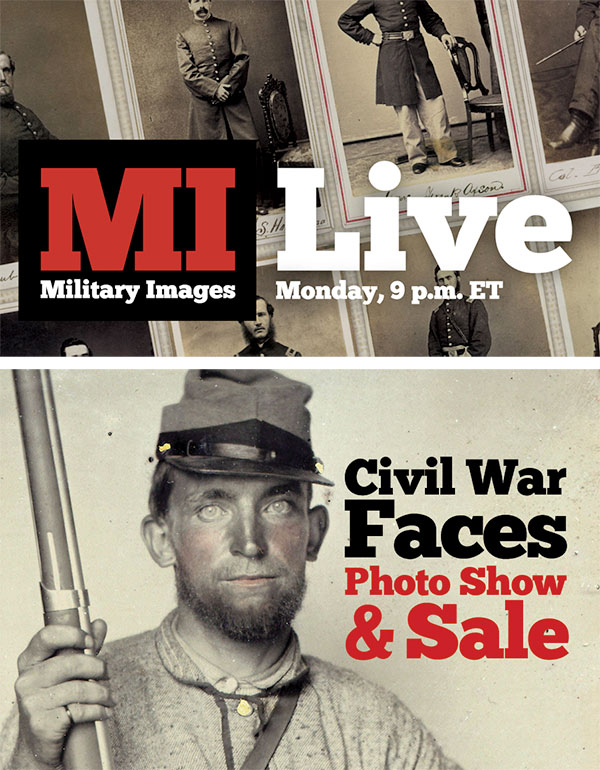 Encouraged, I tried a related experiment last summer: Facebook Live, which streams video instantly. The idea is simple. Every second Monday at 9 p.m. ET, I broadcast Military Images Live from my laptop, sharing items of interest that have landed on my office desk or computer desktop. I also answer questions posed by subscribers and Facebook followers, preview projects in progress for future issues, and promote our great advertising partners. Think of it as a way to get your MI fix between issues!

Another early move was to bring back MI to Civil War collector shows—just as founder Harry Roach had during his tenure. I’ve had a great time making new acquaintances and catching up with old friends. Along the way, I have scanned amazing photographs, picked up story ideas, and added to our subscriber and advertiser base.

Now, thanks to a partnership with Doug York, editor of Civil War Faces and Civil War Faces Market Place on Facebook, we’re hosting our first ever Civil War Faces Photo Show & Sale on March 8-10—just as this issue is being printed and mailed. The event is part of the annual D.C. Antique Photo & Postcard Show in Arlington, Va. We have planned a weekend of activities, including a behind the scenes tour of the Library of Congress, an evening of speakers from across the Civil War image collecting spectrum, and, of course, the show, which includes 12 tables focused on Civil War photography.

Doug and I are looking at other venues for future events. Stay tuned for further details.