Civil War letters are the ultimate first draft of the conflict’s history.

These intimate writings, packed with news and rumor from the front lines and a longing for home and family, remind us about the human condition and the fragility of life. Groupings of such letters penned by the same soldier provide new opportunities to better understand the four brutal years of war that consumed our country, and still fascinate us today. 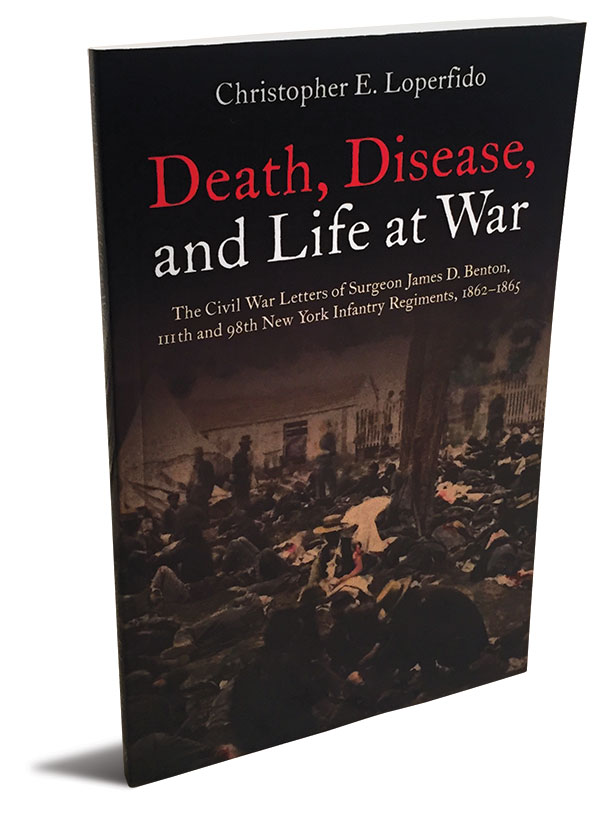 Author Christopher E. Loperfido presents one of those collections in his Death, Disease, and Life at War. The volume presents a series of letters written by James Dana Benton, the surgeon of the 111th and 98th New York infantries.

Loperfido discovered the cache of transcribed letters in a folder inside the Old Brutus Historical Society in his hometown of Weedsport, N.Y. Little did he know that the documents would become his first book.

Benton left his wife and young daughter to serve as an army doctor from August 1862 to August 1865. His letters during this 3-year period reveal a refreshingly honest man. “It is not patriotism that made me take this course but I wanted to make money for my family. If it had been patriotism I should have been sick of it long since but as it is my plunk is good,” Benton noted in a letter to his father, after being captured with the garrison of Harper’s Ferry on Sept. 15, 1862. Benton and his comrades received paroles the next day and spent some weeks at Camp Douglas in Chicago before the exchange.

In another letter dated two years after his capture, Benton talks politics. “In my mind the election of Abraham is as sure as it can be and in the Union army he will find his strongest support. I hope I may have a chance to cast my vote for him. He was the first President I ever voted for and if he is the last the Union ever has he will be my choice.”

Benton also shares numerous details of life in camp and on campaign. We learn, for example, that in February 1864 at Brandy Station, Va., he spends 24 hours on picket guard. Benton explains to his astonished father that, in fact, surgeons were needed on picket duty in case of accident or attack.

The book also includes five valuable medical-related appendices. Death, Disease, and Life at War will appeal to those with a specific interest in surgeons and others with a general interest in wartime narratives.