Early in the Civil War, ambrotypes, tintypes and, to a lesser degree, daguerreotypes, dominated the portrait photography market. These aesthetically pleasing, hard plate images, each as unique as a fingerprint, had a major drawback—copies never lived up to the quality of the original.

Because a favorite hard plate had to be photographed in order to produce a copy. The resulting second-generation photograph lacked much of the detail, clarity and depth of its parent. To make matters worse, the cost of a lesser-quality copy equaled the price of the original high-quality photograph and it required the same amount of time to develop, fix and mount.

The carte de visite eventually solved the problem. Introduced into the United States coincident with the start of the war, these photographs printed on paper from glass negatives resulted in the last image looking as good as the first. And, they were much less expensive than the hard plates. By the end of the war, cartes dominated the market.

The carte however, was not an overnight success. During its wartime climb to prominence, the hard plates continued to be preferred by many military men, despite the desire to provide copies to friends and families eager to have a likeness of their soldier or sailor.

Those who fancied hard plates and needed more copies simply sat for multiple images at the same time. It is easy to imagine a proud soldier picking up his matted and cased images from the photographer, and then sending them to, say, his family in one town and fiancé in another city. This may explain, in part, why collectors seldom locate multiple from-life hard images that reflect the same soldier or seaman in the same place. On rare occasions, alert collectors have reunited surviving images.

These ruby-glass ambrotypes show standing views of a New Hampshire infantryman whose identity is currently lost in time. Both were almost certainly taken during the same sitting which likely occurred in mid- to late-1862. In them, the bearded foot soldier wears a private purchase forage cap that appears to bear the anticipated false-embroidered infantry horn insignia, along with NHV letters, regimental numeral or numerals, and company letter on its crown. All are made of thin die-struck, silver-plated sheet brass, and this insignia orientation and slight variations of it are frequently seen in period images of New Hampshire volunteers. 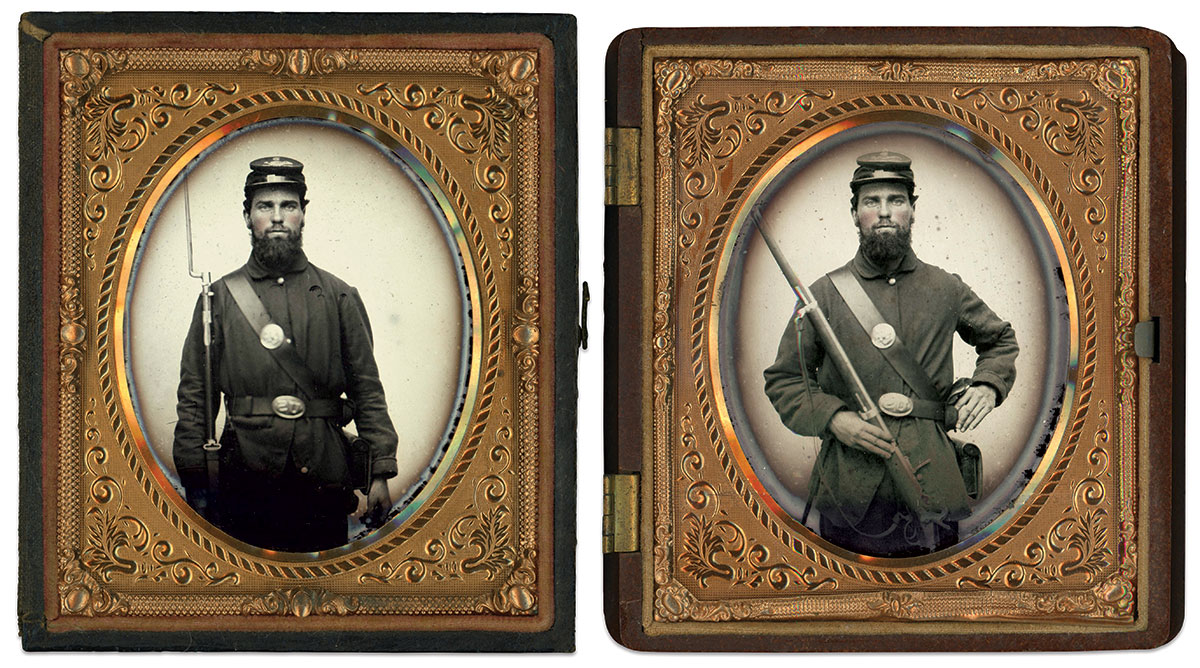 This Granite Stater is garbed in a four-button sack coat with dark trousers. His leather accoutrements include a cap pouch affixed to his waist belt that’s fastened by an 1839 Pattern regulation oval US plate. In addition, a bridle leather infantry cartridge box is suspended on his right hip by means of a waxed leather shoulder belt adorned by a lead-filled 1826 Pattern regulation plate. The photographer chose to forego applying gold paint to the man’s brasses, however skillfully and almost imperceptibly rouged his cheeks in the portraits.The volunteer wields a French pattern percussion musket produced many years prior, possibly in Liege, Belgium. The weapon’s fully cocked hammer, elevated long-range rear sight, and leather sling are visible in the second, whereas its fixed socket bayonet is obvious in the first. The second image also portrays the subject dipping his right thumb and index finger into his cap pouch, pretending to pluck out a percussion cap to prime his musket’s cone. Such a pose is exceptionally rare in period military photographs.

Acquired first but without identification, the ambrotype, left, pictures a federal infantryman. He sits with his legs crossed and right elbow resting on a small table. He wears a somewhat deflated forage cap, standard nine-button frock coat with brass shoulder scales, and dark trousers. His accoutrements include a leather waist belt secured by an oval US plate. A leather scabbard retaining its socket bayonet is attached to the belt, to the left of the 1839 Pattern plate. We see no cap pouch, cartridge box, or shoulder belt plate. 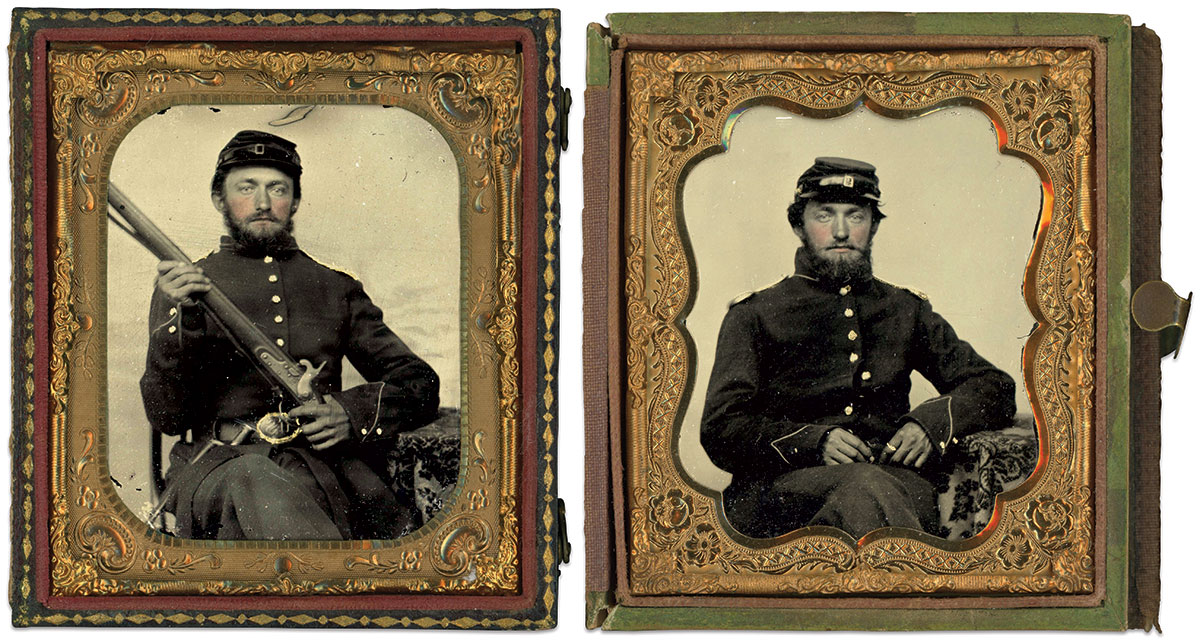 The photographer went to the trouble of applying intrusive gold pigment over the man’s uniform buttons and around the perimeter of his belt plate. He also festooned the brass shoulder scales. The soldier’s cheeks are lightly accented in pink to provide a more lifelike appearance.

He’s armed with a U.S. Model 1822 .69 caliber musket, which he holds at the port arms position. Its browned barrel differentiates this firearm from its predecessor, the U.S. Model 1816 musket, as well as from its successor, the U.S. Model 1822/28 musket. We clearly see the weapon’s lock plate, which reveals it was altered to percussion ignition from its original flintlock configuration. This alteration likely occurred sometime in the 1850s using the so-called Belgian or cone-in-barrel method. This specific technique was performed exclusively at U.S. government installations.

The second image, right, was acquired years later. The image was likely taken during the same visit to the photographer. The primary difference is the missing musket and belt. His hands rest instead in his lap. As in the first image, his cheeks are lightly rouged, and his buttons and shoulder scales highlighted in gold. A gold ring on his right index finger is noteworthy. No such band appears in the other portrait, suggesting the photographer or an assistant created the piece of jewelry with a nudge of his or her paintbrush.

The identity of the soldier, penciled on a yellowing slip of lined paper tucked behind the plate, is Joseph W. Crist of the 130th Pennsylvania Infantry. He mustered into Company F in August 1862 for a 9-month enlistment. The 130th participated in three major battles during its relatively short service—Antietam, Fredericksburg, and Chancellorsville. Crist suffered a wound at the final engagement, and mustered out with his comrades in May 1863. Crist rejoined the army as a corporal in the Keystone State’s 3rd Heavy Artillery. He never returned home. Captured in southeastern Virginia soon after his re-enlistment, Crist died a prisoner of war in Salisbury, N.C., in early 1865.

An Iowan who rose from private to major

These clear-glass ambrotypes picture a Union cavalryman. In the first image, the clean-shaven, baby-faced private is visible from the knees up with his left hand resting on a small table. He’s attired in a privately purchased cap, fully buttoned mounted shell jacket with a high stand-up collar, dark trousers and gauntlets. The ensemble appears new. Although enlisted, he supports an officer’s U.S. Model 1840 dragoon saber in a polished steel scabbard. The saber is distinguished from its enlisted counterpart by the decorated pommel, which was finished bright without decoration. In addition, his patent leather saber-belt appears to be of officer’s quality with its tooled edge. His 1851 Pattern regulation plate is upside-down, indicating the belt rig was purposely inverted in an attempt to correct the laterally reversed exposure. 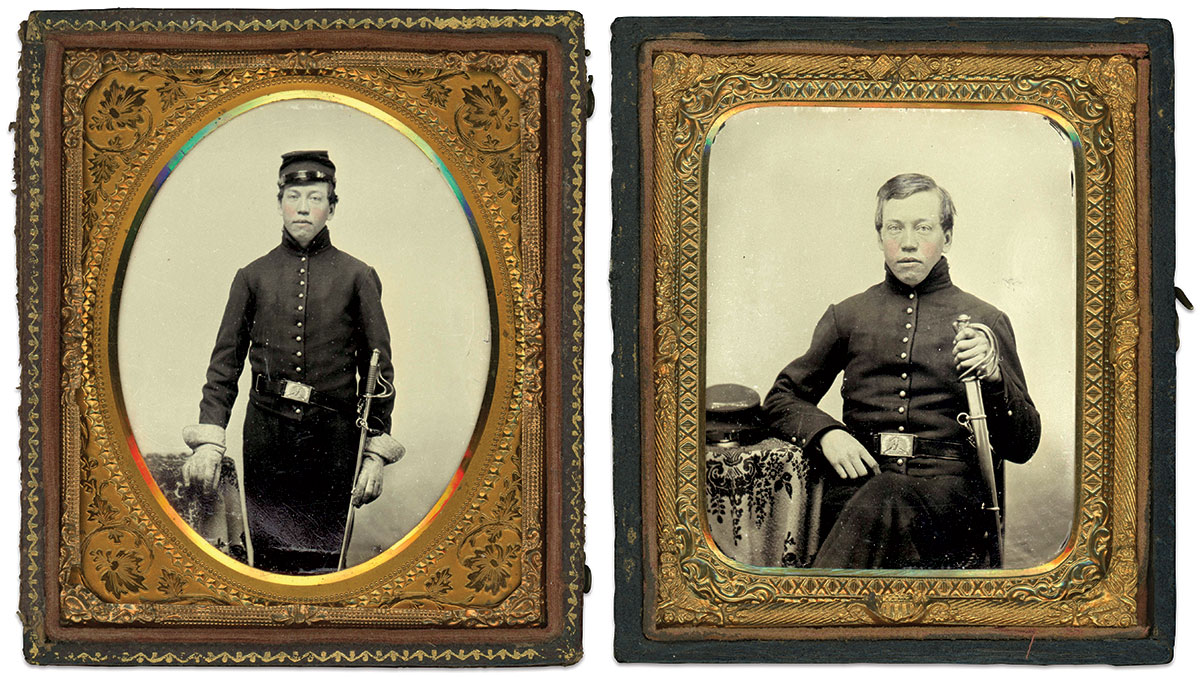 The same man appears seated with his right leg thrown over the left in the second portrait. He wears the same uniform, but without gauntlets. His cap has been removed and rests on the table next to his left elbow. We can now see the crossed sabers cavalry insignia decorating the crown. He grasps the saber in his right hand, and his belt remains in place. Neither image is defaced by a photographer’s gilding. But the subject’s cheeks are skillfully rouged. Of particular note, he appears to have a healed cleft lip.

The trooper is identified in both images as Joseph Lyman, who enlisted in federal service in November 1861, and mustered into Company E of the 4th Iowa Cavalry before the end of the month. He received a discharge for promotion in October 1862 to accept a first lieutenant’s commission in the 29th Iowa Infantry. He went on to serve as the regiment’s adjutant before becoming a member of the staffs of two generals: aide-de-camp and inspector general to Brig. Gen. Samuel Allen Rice, and major, aide-de-camp and acting adjutant general to Maj. Gen. Frederick Steele.

Lyman mustered out of the army in August 1865. He returned to Iowa and became an attorney in Council Bluffs. He went on to serve in prominent state positions, including as a deputy collector of Internal Revenue, a circuit court judge and, from 1885 to 1889, as a 2-term Republican member of the U.S. House of Representatives. He died a year after the end of his political career, and was interred in Council Bluffs’ Fairview Cemetery. Lyman was 49.

Dan Binder is an MI Contributing Editor. A gallery of representative images from his collection appeared in the Winter 2018 issue.