These uniquely, thoughtfully posed Civil War cartes de visite were taken by lensman Frank Rowell of Providence, R.I., a refreshingly innovative photographer whose contributions to the art have been largely forgotten.

A New Hampshire native who settled in Providence before the war, Rowell later moved to Boston and partnered with photographer Edward L. Allen. Their studio, Allen & Rowell, became “the place the old families sought to have their likenesses perpetuated,” according to the Boston Globe. Rowell’s artistry behind the camera was matched by his experimentation with photographic processes and chemistry. His work was referenced in various publications, and included in America’s 1876 Centennial Exposition. Rowell lived until 1900, dying at age 68. This grouping of portraits was likely taken in September 1862, and picture members of Company D of the 10th Rhode Island Infantry after their return from a three-month stint in Fort DeRussy, part of the defenses of Washington, D.C. 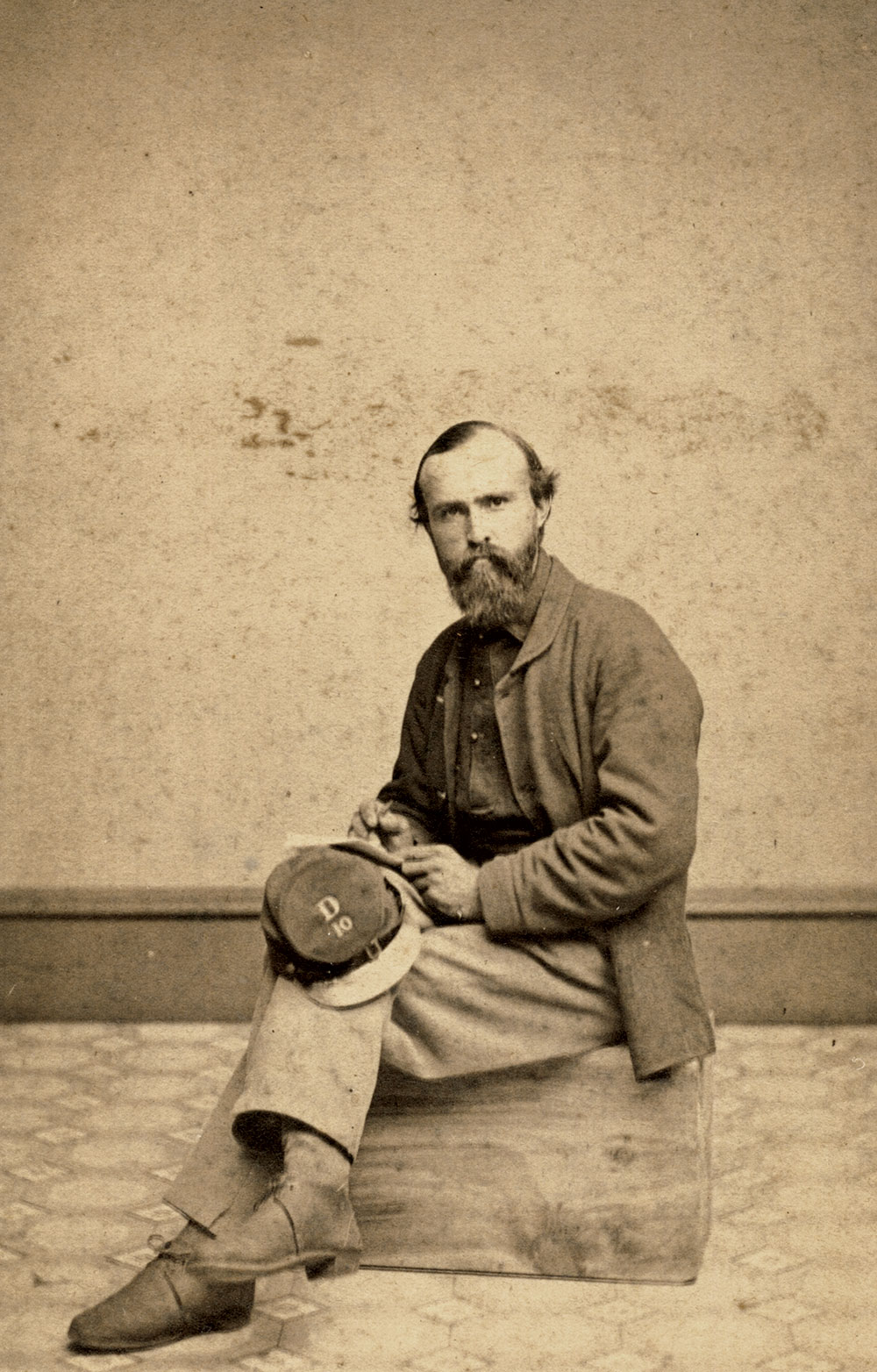 His face reflecting a quiet outrage born of the interruption to the flow of his letter composition by perhaps an unexpected and sudden intrusion, the author balances his forage cap upon his knee and tightly clenches his small stub of pencil, anxiously awaiting the opportunity to complete his missive in peace. 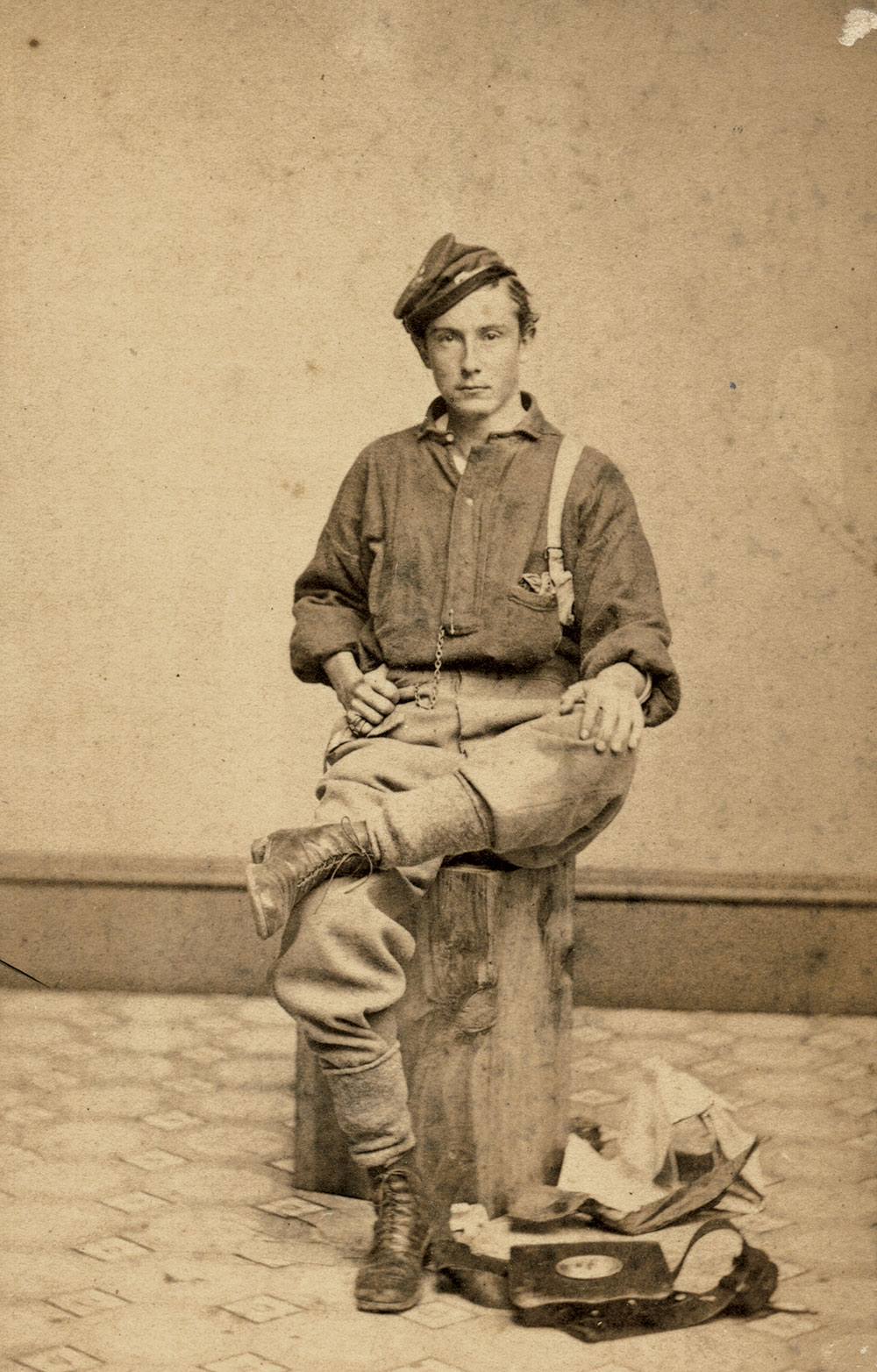 His fatigue blouse nowhere to be seen and his accoutrement set flung on the floor amid other debris, Pvt. Edward Colton Clark sits before the camera brimming with attitude and wearing a cocked forage cap, trousers tucked into his socks, and piggybacked carved rings on the pinky of his right hand. 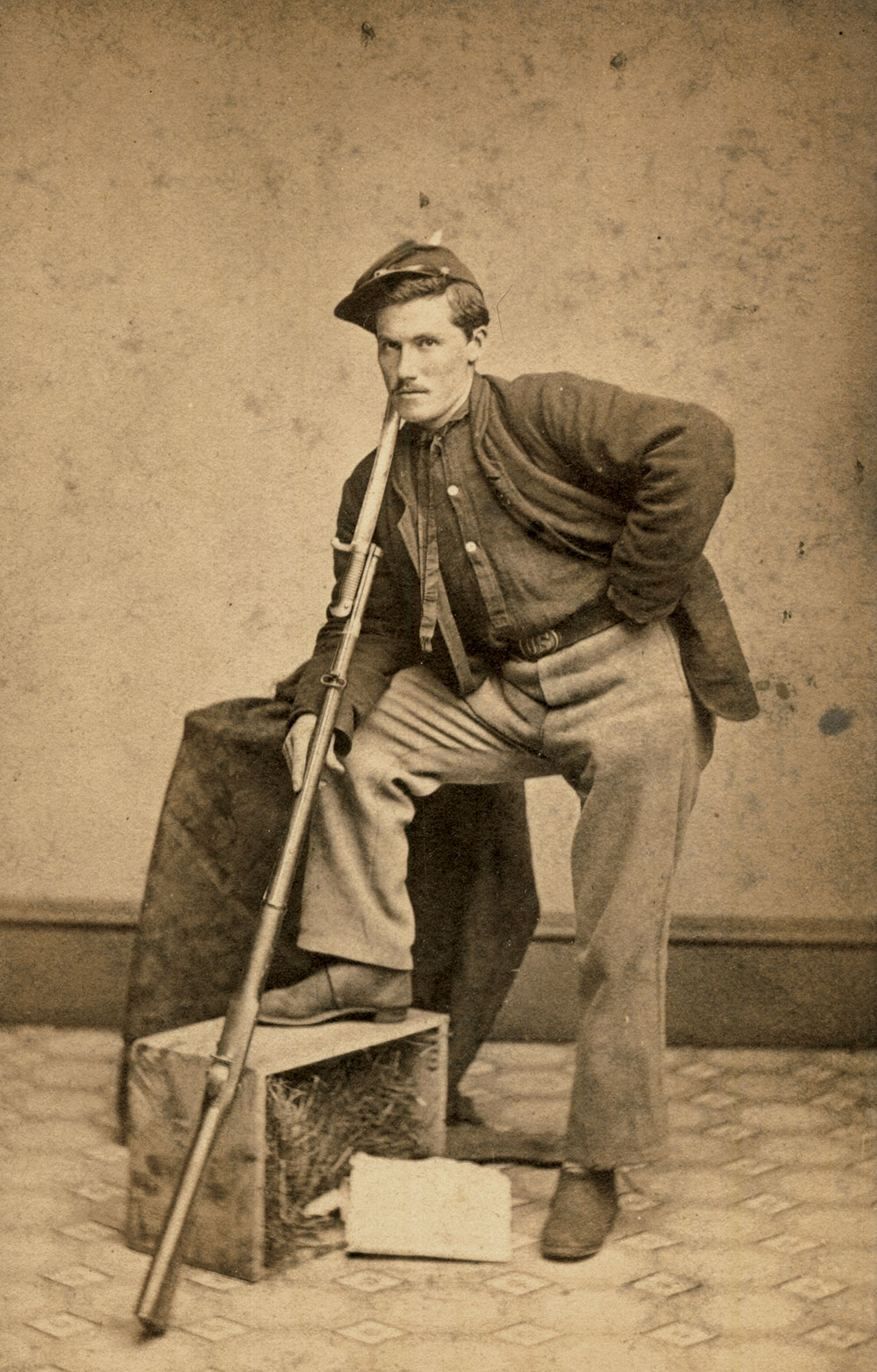 Standing in a dynamic and no-nonsense posture, Pvt. John Amon Price is obviously ready for action, his US belt buckle soiled with the dirt of the field and prominently displayed, as his fist presses firmly against his hip and he lovingly cradles upon his shoulder a musket affixed with a deadly saber bayonet. 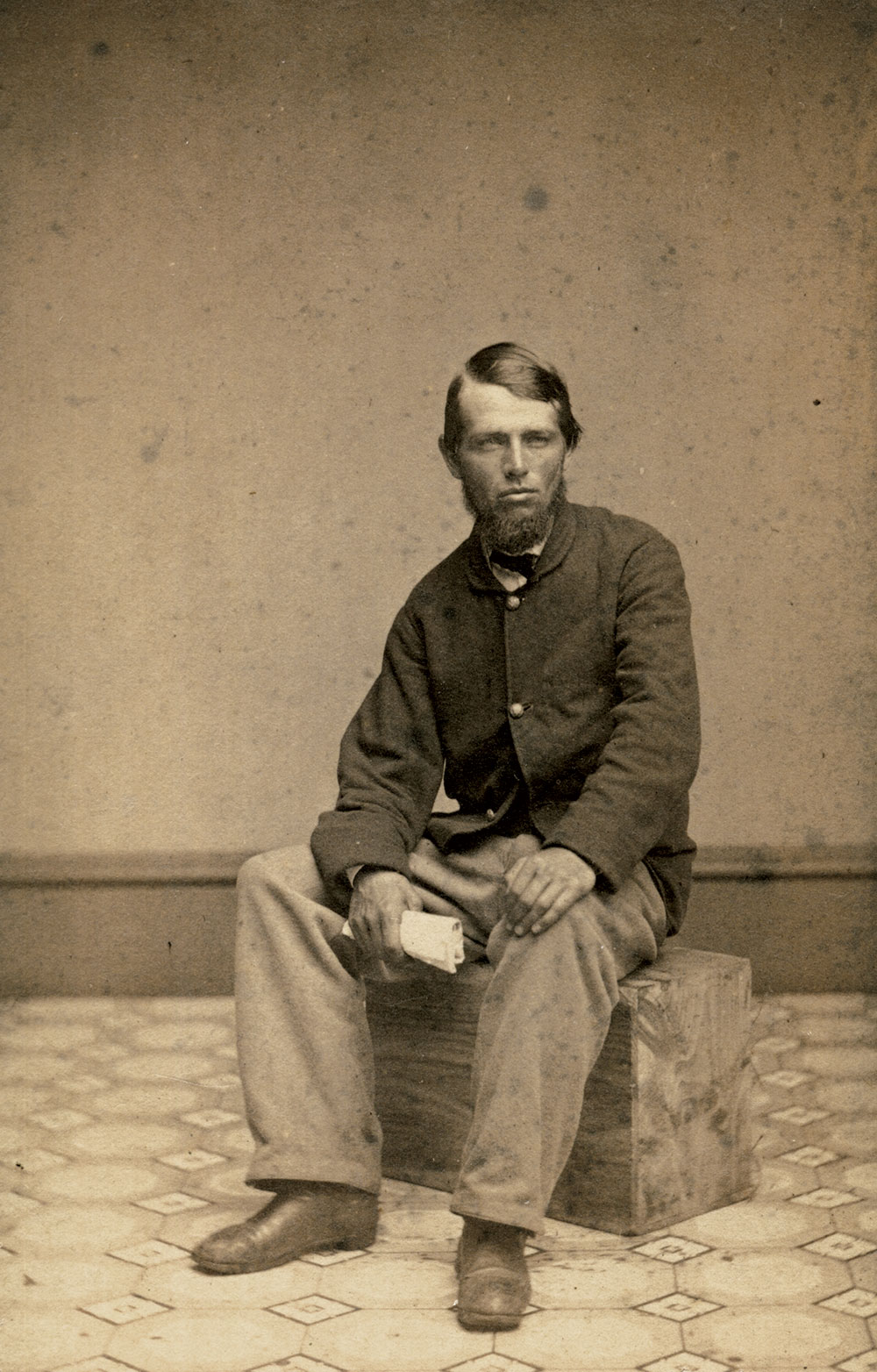 Engaging a dangerous enemy on the battlefield could not be further from the erudite mind of this gentleman, preferring instead to exercise his capacious intellect by virtue of the folded reading material clutched tightly in his hand, while simultaneously contemplating his next move. 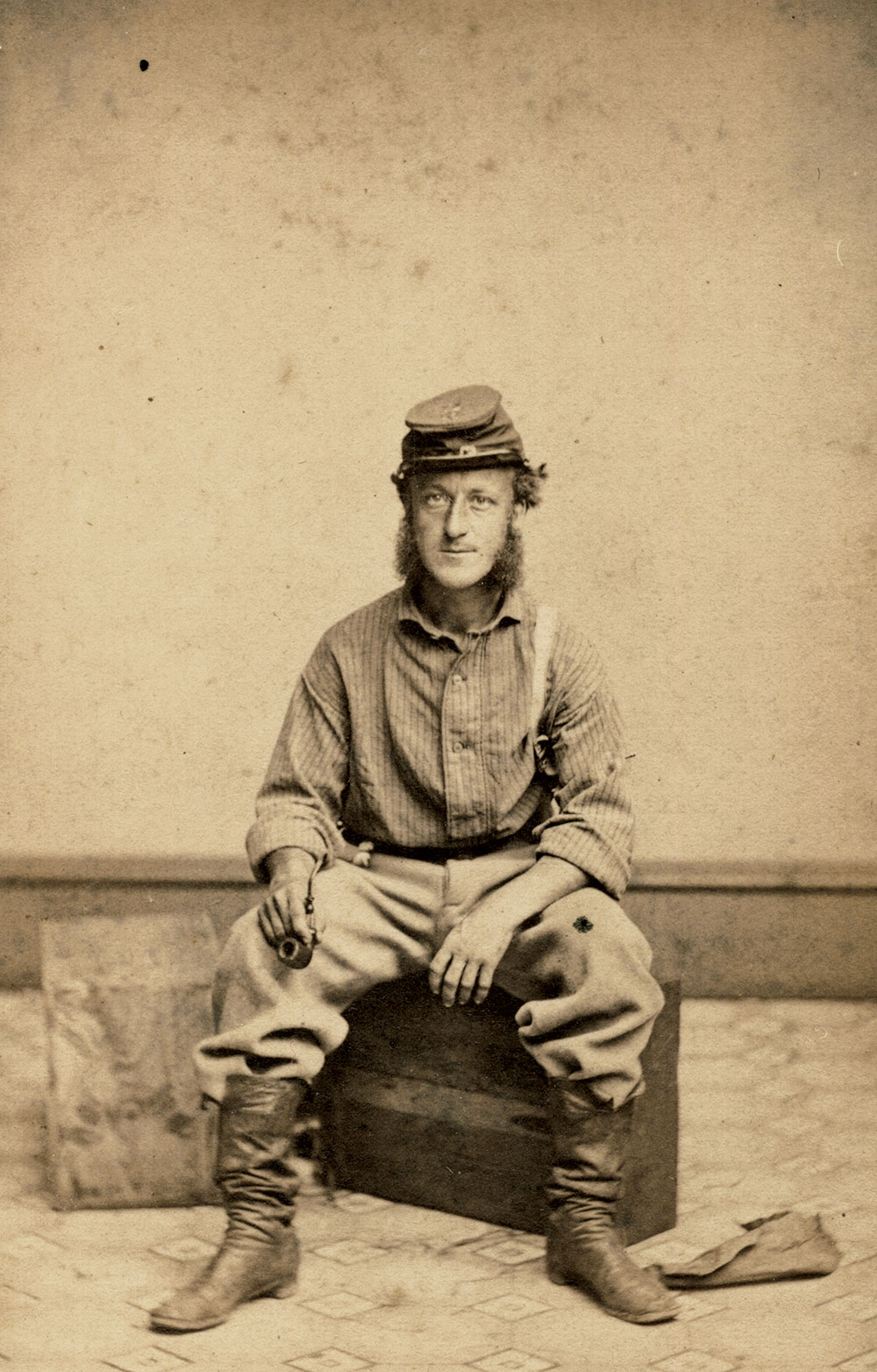 Holding a burl wood pipe as equally as precious, and with one suspender slung down and trousers stuffed into his boots, this fellow seemingly has much on his plate, as he sits pensively, but decidedly, with pulled over sleeves on his fashionable pinstriped shirt and important decisions to be made. 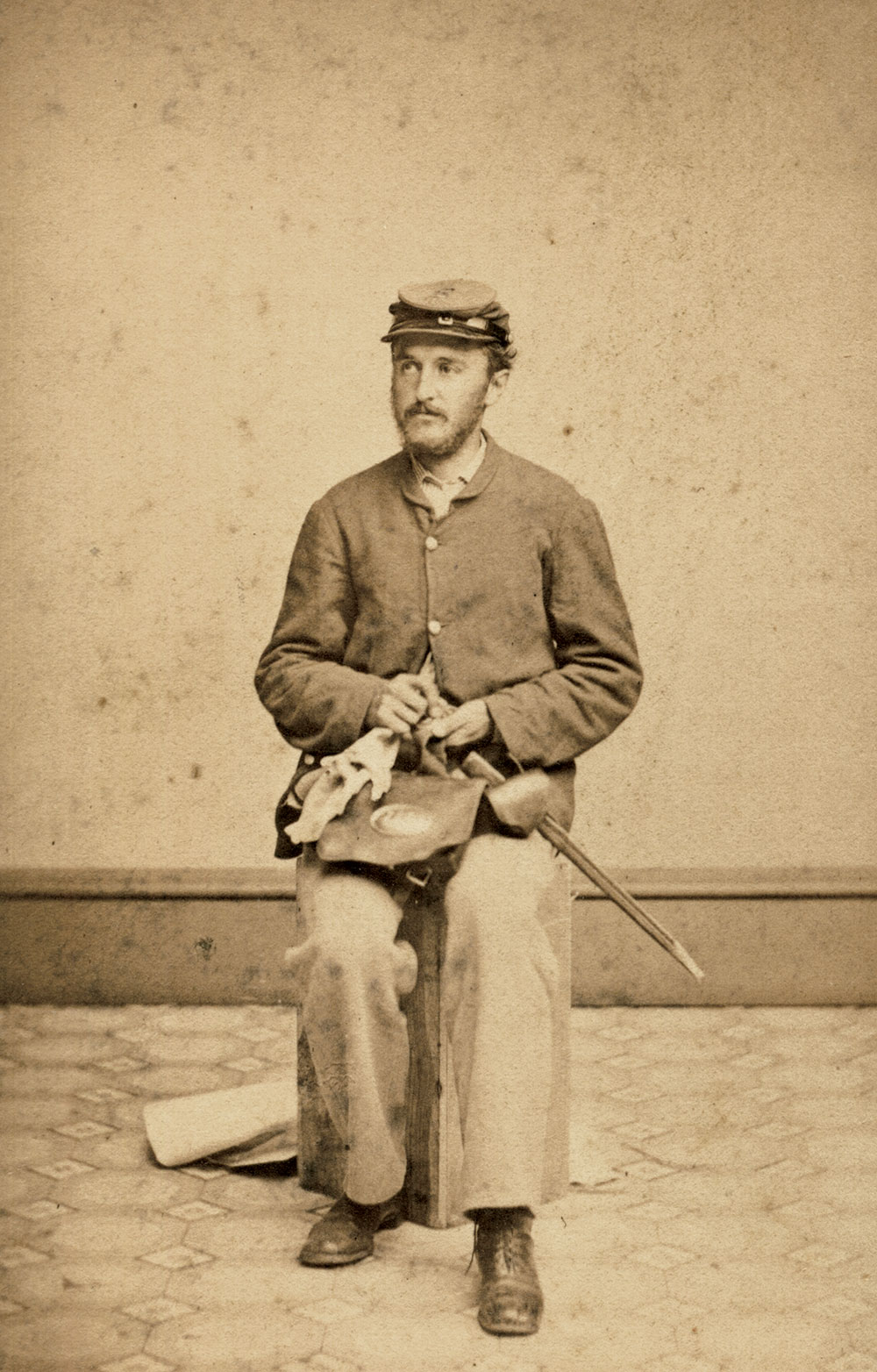 Dutifully and neatly seated in full fatigue uniform, Pvt. Norman Nelson Mason conscientiously readies his accoutrement set for inspection, ever so carefully shining his US oval belt plate with a scrap of textured cloth and wondering with apprehension whether his efforts will pass muster. 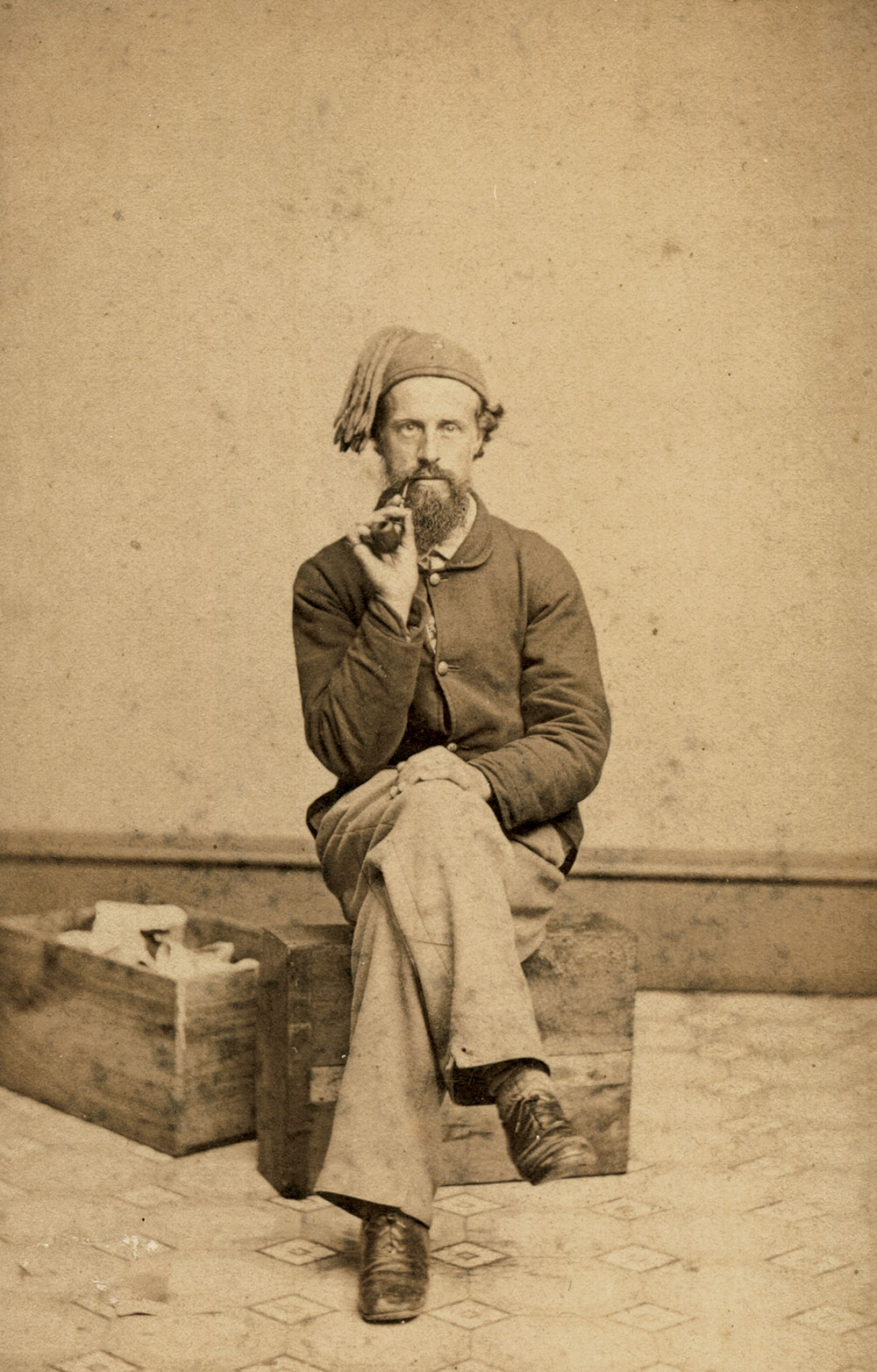 With his legs crossed in the most casual manner and boastfully sporting a smoking cap with a grand tassel, this bon vivant puffs away and relaxes with his favorite pipe, clearly indicating by his body language that he’ll be going nowhere until he’s enjoyed the last taste of glowing tobacco. 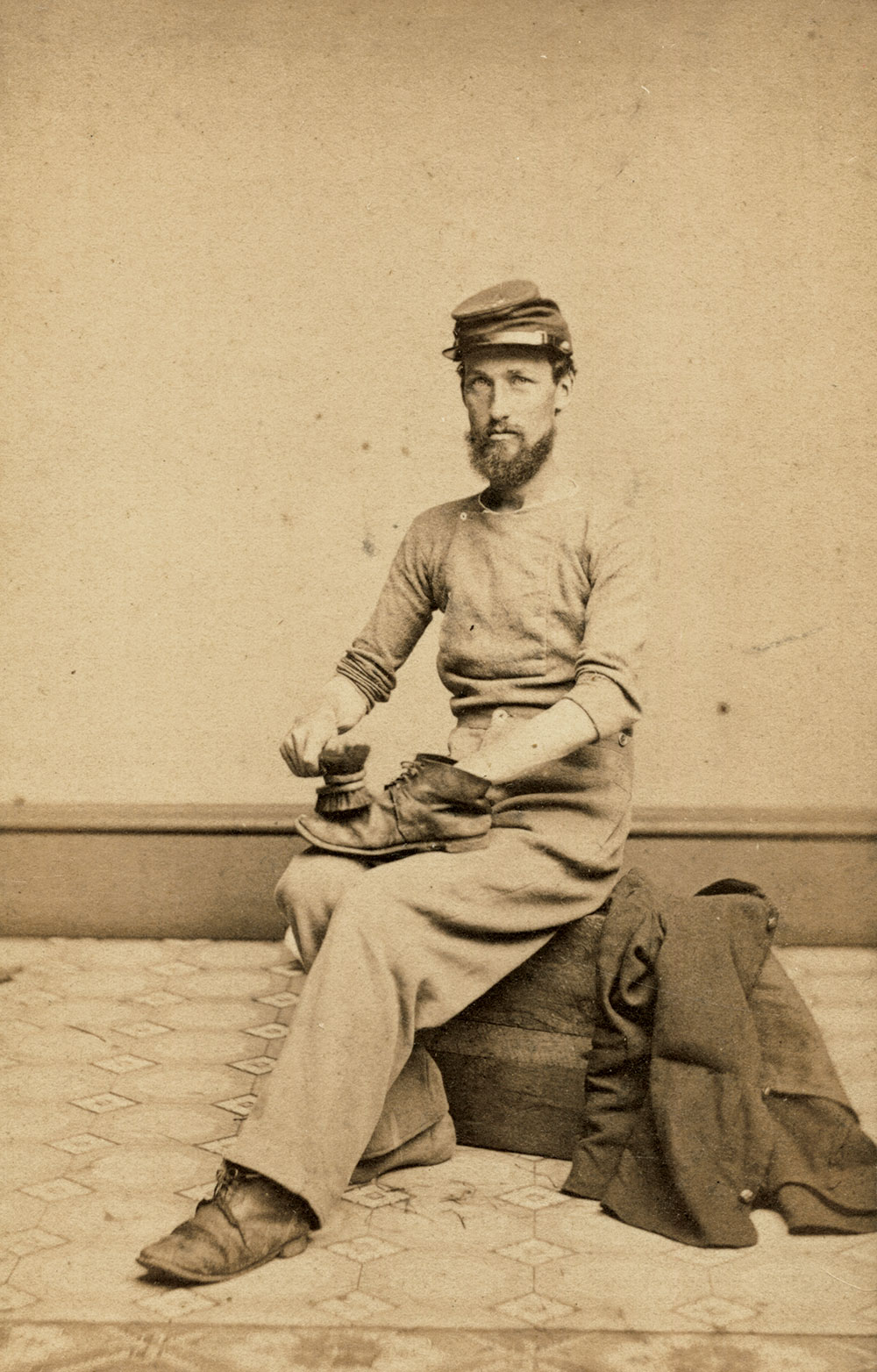 Sitting on a wooden army supply crate alongside his removed fatigue blouse, the sleeves of his bib front woolen shirt rolled up so as not to interfere with the task at hand, this intensely motivated soldier works at polishing his dusty brogans to the extent that his very own mother would be proud.