Nicknamed the “Silk Stocking Regiment” for the socially elite New Yorkers in its ranks, the 7th New York State Militia  was nevertheless a well-equipped, drilled and officered corps of citizen soldiers.

Unlike most militia regiments of the era, the regiment was full strength, numbering more than 1,000 men. Like most militia in New York City, it was listed as “artillery, doing duty as infantry,” and, as a result, its officers wore red trim on parts of their uniforms rather than blue. Enlisted men, however, wore nothing red with their gray, black and gold uniforms.

Although never engaged in battle, the regiment earned recognition for its swift response to an undefended national capital in April 1861, and its service in augmenting regular troops during Confederate incursions into the North. Moreover, half the men of the 1861 regiment served as volunteer officers during the war. After the war, the 7th went on to become a New York National Guard regiment, and served into the 20th century.

In 1861, photographs by Mathew Brady’s studios in New York and Washington, D.C., immortalized the regiment. The images, including the cartes de visite here, are among the most artistic studio and camp scenes of the war. Most came from two albums purchased in a Baltimore bookstore by famed photo collector Herb Peck in 1971. Peck later sold them to a New Jersey collector. Through the years, the albums were broken up, and the images sold individually. 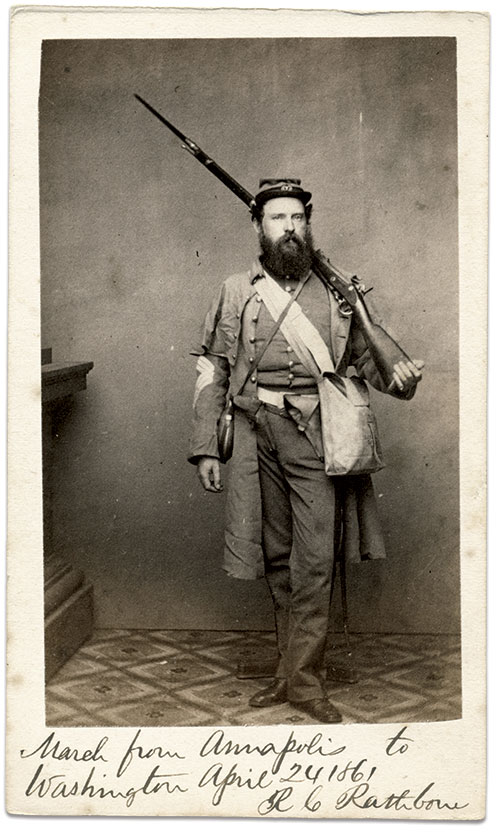 Sgt. Maj. Robert C. Rathbone inscribed his studio portrait as on the “March from Annapolis to Washington April 24th 1861.” He is pictured clad in an overcoat with white chevrons on the lower sleeves. He wears a haversack and canteen, and carries two privately purchased pistols in holsters. 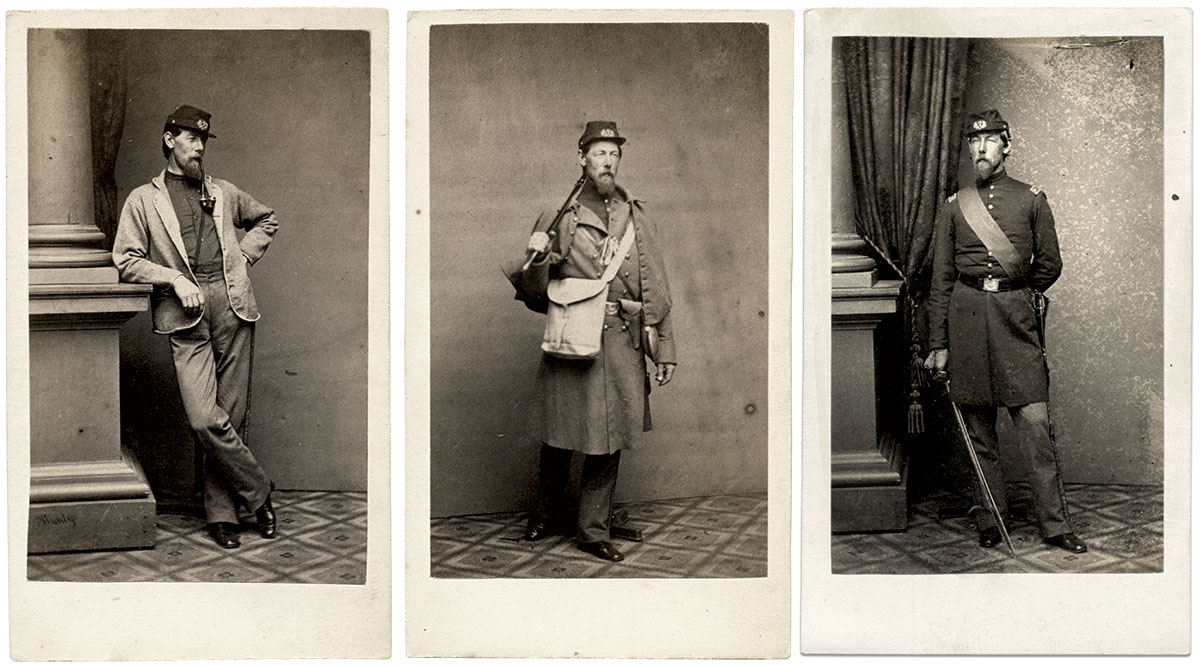 Major on Track to Become a Brigadier

Alexander Shaler, the regiment’s major, left in June 1861 to become the lieutenant colonel of the 65th New York Infantry. Captured at the Battle of Chancellorsville in May 1863, he was eventually released and ended the war as a brigadier general. He is pictured here in three cartes de visite, including a pose as though on the march with a large haversack to his front and sword on his shoulder.

Noncoms of the 8th Company

Posed together, these unidentified noncommissioned officers served in the 8th Company of the regiment, as evidenced by the numerals on their caps. Based upon this detail, the first sergeant on the left may be John W. Spicer. The corporal carries a knife attached to his waist belt. Both men wear shoulder belts for their swords. 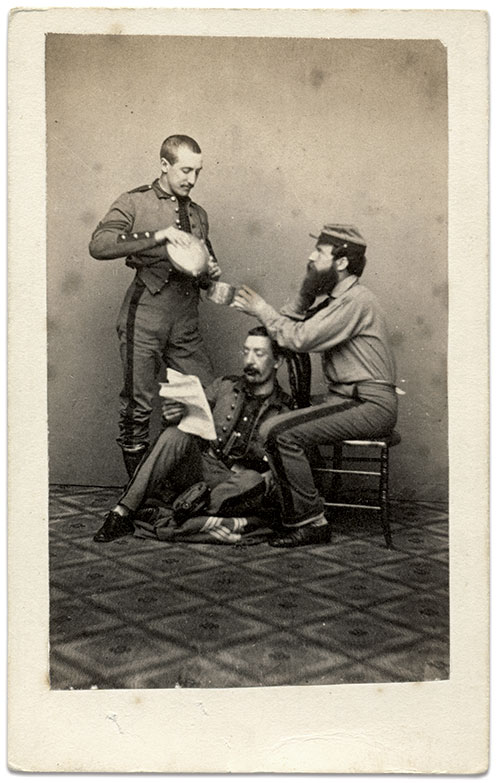 The sergeant pouring from the canteen is Oscar Ryder, the right general guide of the regiment. The identities of his comrades are not known. 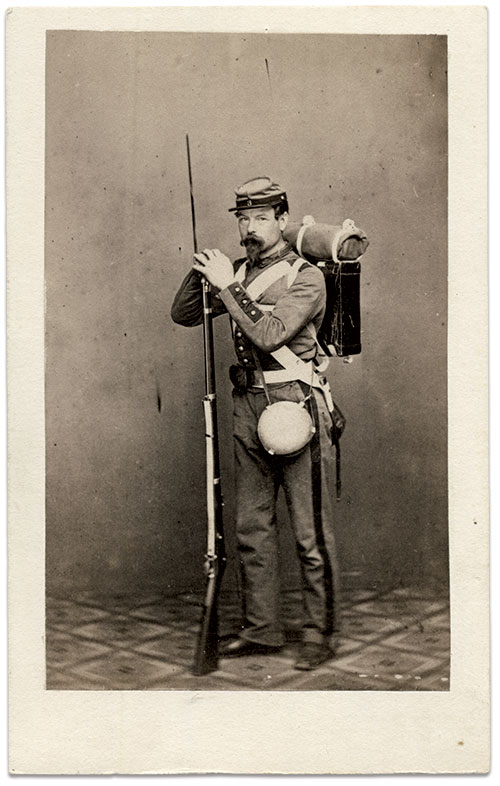 This private wears the regimental gray and black fatigue uniform with box knapsack and rolled overcoat. His uncovered canteen was a regimental standard. 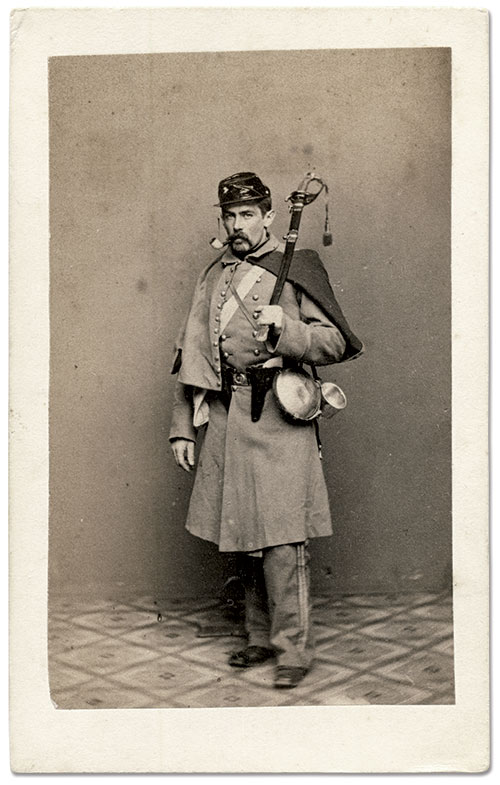 1st Lt. Meredith Howland served as the regiment’s assistant paymaster. He poses in his overcoat with pipe in mouth and sword on his shoulder as though on the march. 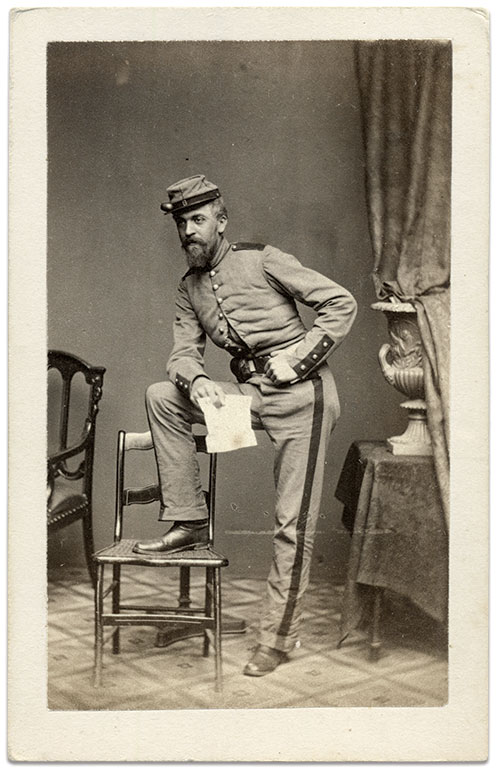 There are plenty of places to stow a pipe. James Seaman Casey chose to tuck one into his cap. Casey left the 7th in August 1861 to become a second lieutenant in the 5th U.S. Infantry, and ended the war as a captain. He went on to serve in the regular army, and received the Medal of Honor for leading an assault in the 1877 Battle of Wolf Mountain, Montana Territory, part of the Black Hills War. 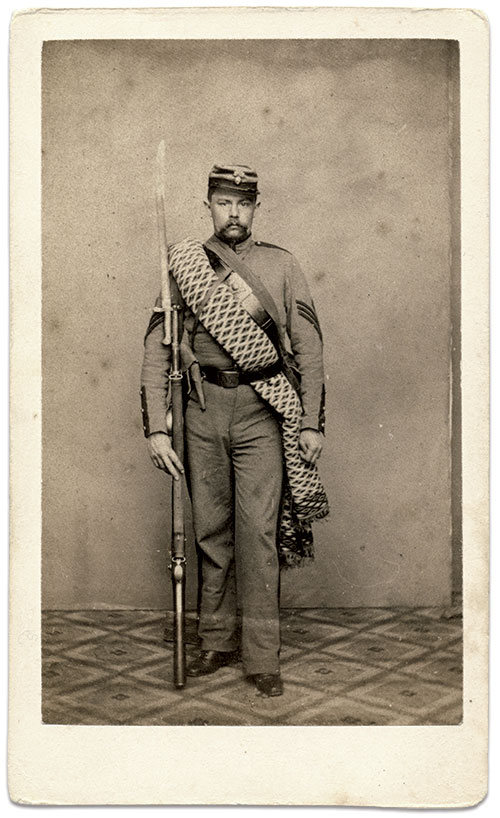 Thomas Lord, Jr. served in the regiment’s Engineer Company, as evidenced by the ordnance bomb insignia on his cap. His personal blanket is prominently displayed, and his accouterment straps were of black leather instead of the white buff of the rest of his regiment. Lord went on to serve as a second lieutenant in the 1st New York Infantry and a captain and aide-de-camp to Maj. Gen. John A. Dix.

When the men of the 7th left New York, they did so without formally issued blankets. This private likely brought his from home. 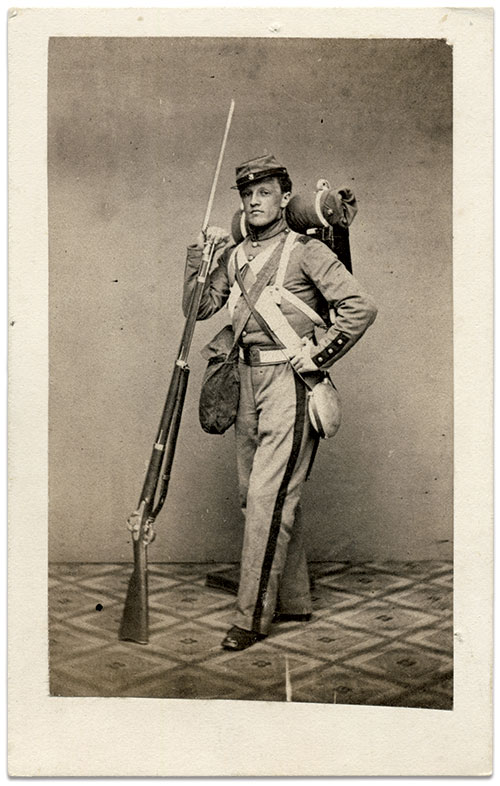 This private wears a full set of accouterments, and rests his hand on the muzzle of a Model 1855 rifle musket. 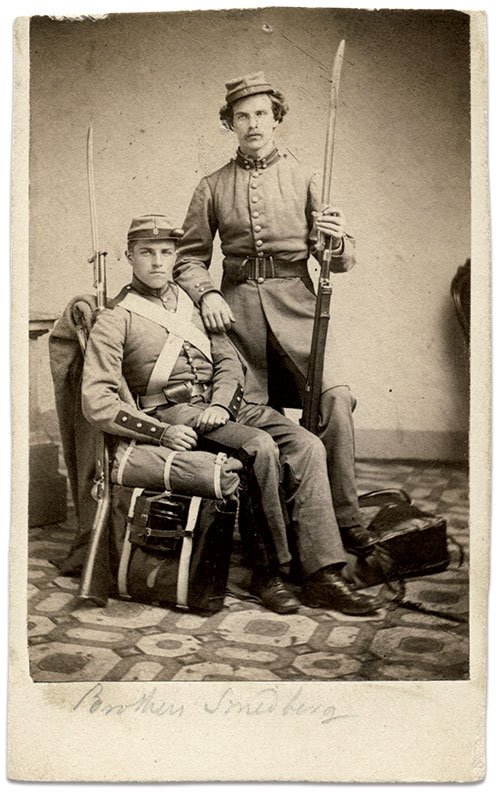 Charles Smedberg, seated, had a family reunion in Washington when he met up with his brother, William, a militiaman in the District of Columbia’s National Rifles. Charles would leave the 7th to become an officer in the 14th U.S. Infantry. He died of disease in 1863. William also became an officer in the 14th, and received brevet promotions for the battles of Gettysburg and The Wilderness. 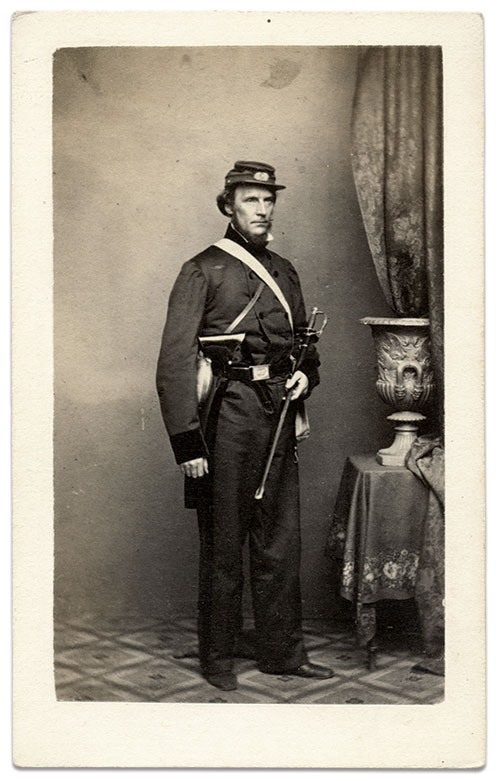 Chaplain Sullivan H. Weston wears the black uniform consistent with his rank, though he is armed with sword and pistol. He also carries a haversack and canteen. His sword belt plate contains the letters “NY” in a wreath common to New York officers.

Surgeon Timothy M. Cheeseman struck two artistic poses for his portraits, first, sitting backwards on the studio chair, left, and again, right, as though on the march. His frock coat is single breasted, unlike federal regulations for officers of his rank. He wears a haversack and canteen in his portrait with the overcoat. Note the pistol stuck in the breast of his coat. 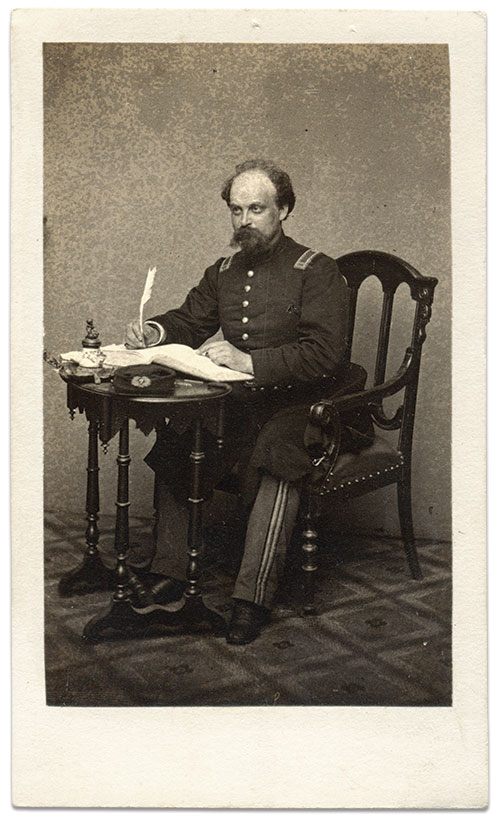 The Adjutant of the 7th

1st Lt. Joseph Henry Liebenau, the regimental adjutant, strikes an appropriate pose as a staff officer, with ledger and quill pen. He went on to serve as captain and assistant adjutant general of U.S. Volunteers. 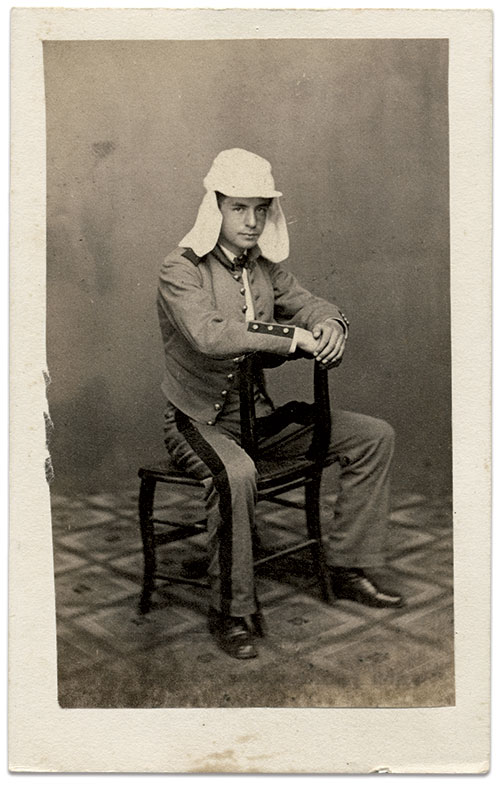 A private sitting backwards on a chair wears a havelock cap cover to protect him from the sun in the taxing Southern climate. 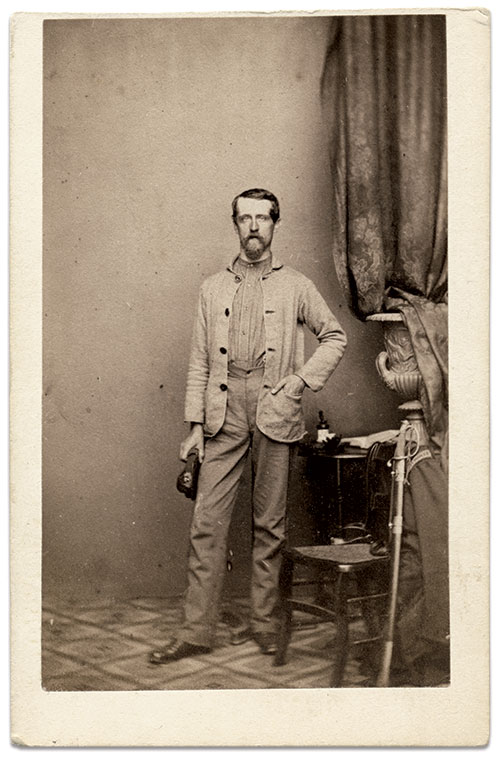 Emmons Clark was a captain when the 7th traveled to Washington in 1861. He later became colonel and author of the History of the Seventh Regiment of New York 1806-1889. He wears an “Aspinwall,” a privately purchased gray sack coat named after wealthy New Yorker William Aspinwall, who donated them to members of the regiment. His uniform jacket hangs from a chair next to him. His sword is also visible.

MI Senior Editor and Advisory Board member Michael J. McAfee is a curator at the West Point Museum at the United States Military Academy, and author of numerous books. He has curated major museum exhibitions, and has contributed images and authoritative knowledge to other volumes and projects. The cartes de visite featured here are part of his collection.