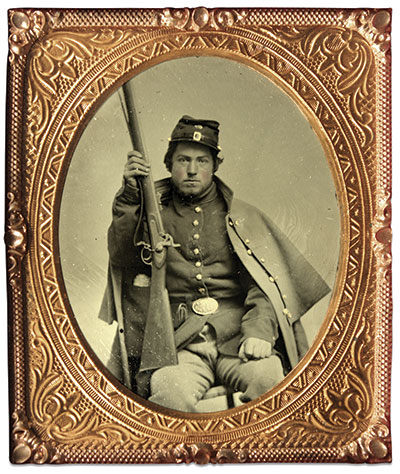 THIS SOLDIER SHOWS OFF his Model 1853 Enfield rifle musket. Draped around his shoulders is regulation overcoat. The dark inner lining of the coat is visible on the left side, and includes a pocket into which is placed what may be a piece of hardtack. 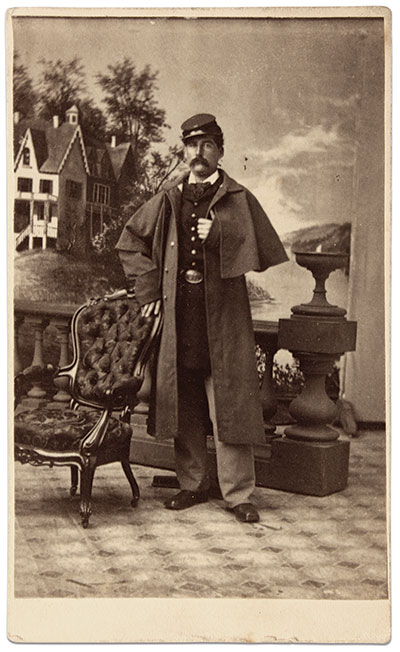 A DAPPER SOLDIER strikes a Napoleonic pose in his greatcoat as he stands in front of an elaborately painted backdrop that features a gabled house. 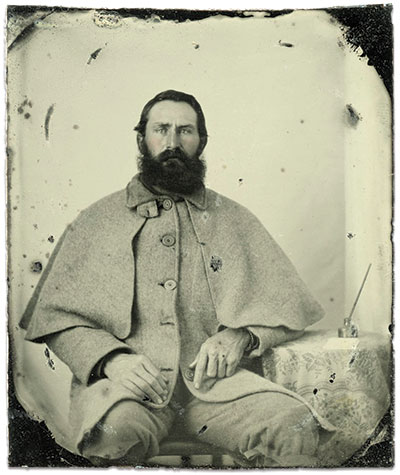 A CONFEDERATE SOLDIER dressed in what may be an imported English greatcoat with large wooden buttons, sits next to a table with an inkwell and pen. 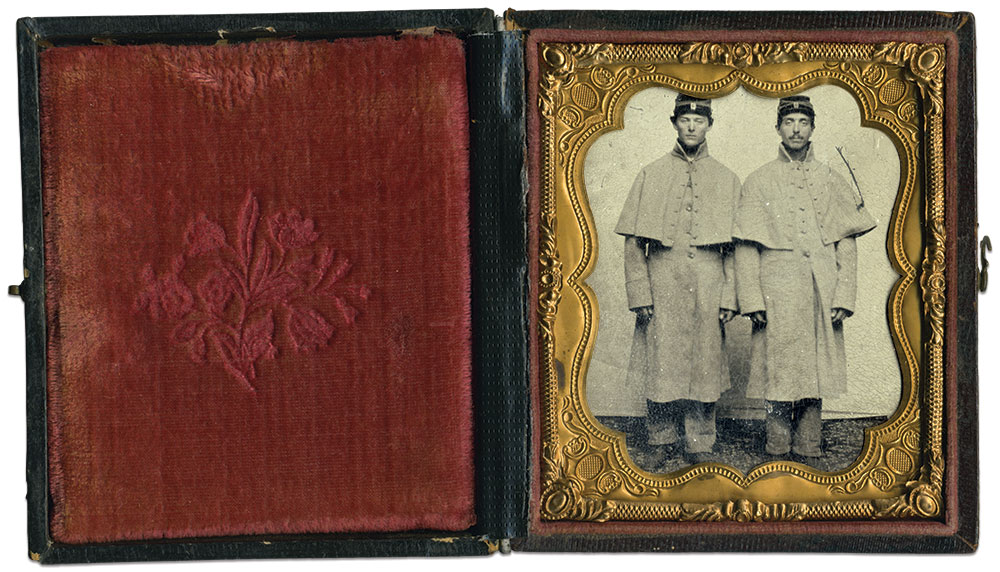 A PAIR OF FEDERALS posed for their portrait against a simple canvas backdrop, which suggests the image was made in camp. In photographs with similar backdrops, a crude wood floor or the ground is typically visible. In this case, however, a floral-patterned carpet is used. 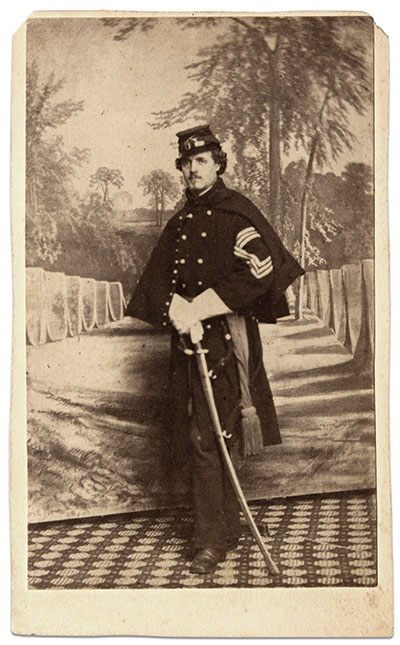 A SERGEANT MAJOR with his non-commissioned officer’s sword and sash pulled back the cape of his double-breasted greatcoat to reveal his rank. The camp scene painted on the canvas backdrop behind him depicts a tent-lined company street. 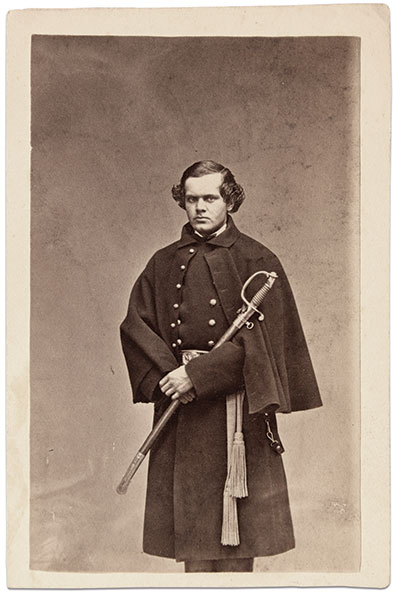 THOUGH A DARK GREATCOAT hides this man’s uniform, his Model 1850 sword, sash and cloak style indicate that he ranked as an infantry officer. 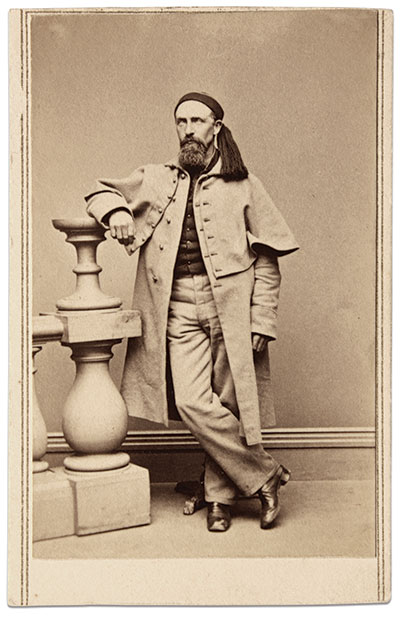 AT FIRST GLANCE, the tasseled cap worn by this resolute federal suggests he is a Zouave. It is a casual cap however, intended for lounging about camp—or in this case at the photographer’s studio. 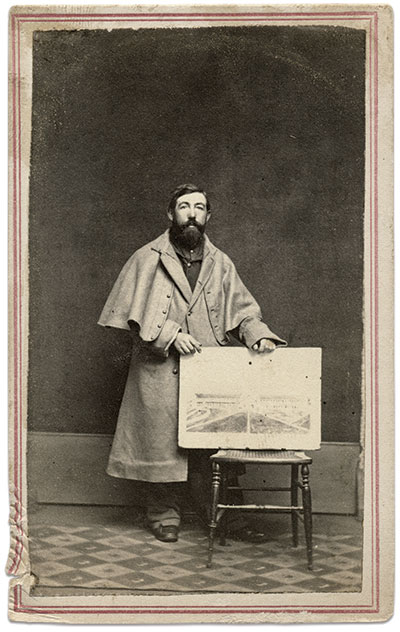 A SOLDIER, PERHAPS AN ARTIST, stands with pride beside an illustration of what may be the interior of a fort or campground in the vicinity of Frederick, Md. The photograph is dated December 1864.

Fort on the Hill 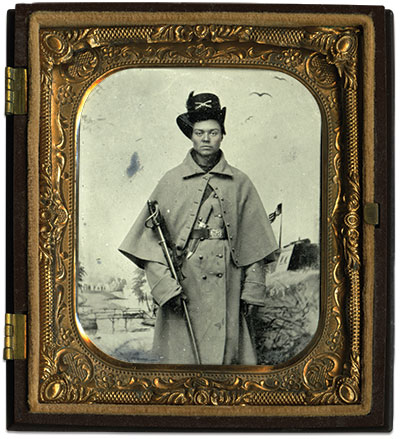 CRADLING HIS SABER and armed with a knife, this federal cavalryman wears a regulation double-breasted overcoat. The cape has only eight buttons instead of the customary 10. He stands in front of the “Fort on the Hill” backdrop used by St. Louis photographer Enoch Long, who operated at Benton Barracks. 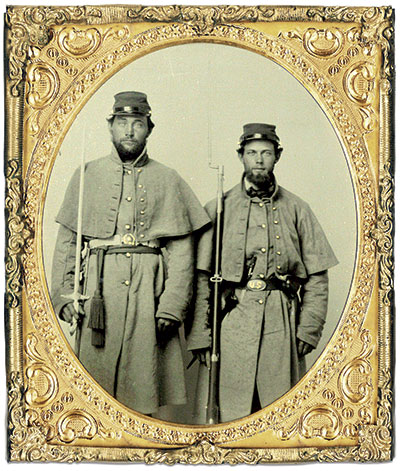 THIS PAIR OF INFANTRYMEN wears standard single-breasted sky-blue overcoats, a design prescribed for the U.S. Army by 1851. The capes however, come up a bit short as they should extend to the elbow. This detail may be evidence of a shortage of material or a supplier cutting corners. The militia sword and belt visible on the man standing on the left suggests he is a non-commissioned officer. The enlisted man to his right holds what appears to be a Model 1816 musket, and carries a knife in his waist belt. 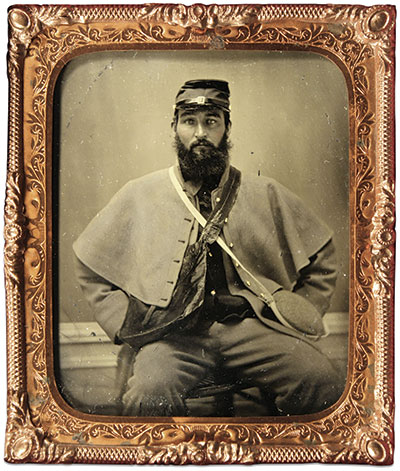 DRESSED IN A STANDARD INFANTRY GREATCOAT over a waist length jacket, this unnamed soldier, left, carries a painted canvas haversack and a Model 1858 tin canteen with a wool cover. 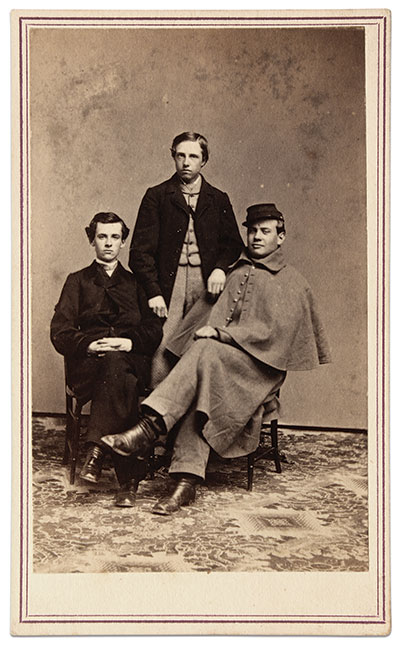 THE GREATCOAT worn by this soldier features an oversized collar. 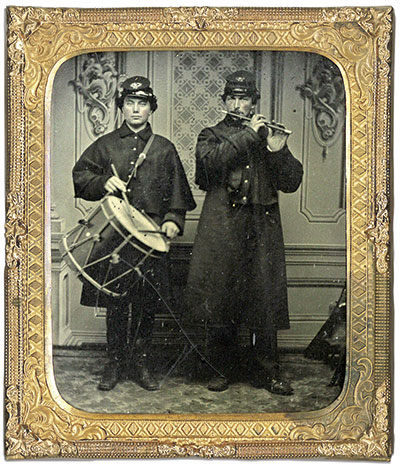 A DRUMMER AND FIFER strike an animated pose in the photographer’s studio. They wear regulation infantry greatcoats that appear made of darker cloth, possibly due to a shortage of standard sky-blue material. The insignia on their caps appears to be a wreath rather than the usual horn worn by infantrymen. 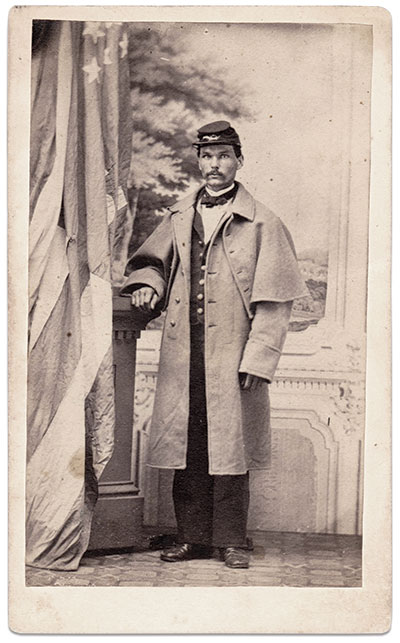 AN ENLISTED MAN clad in his regulation infantry greatcoat. 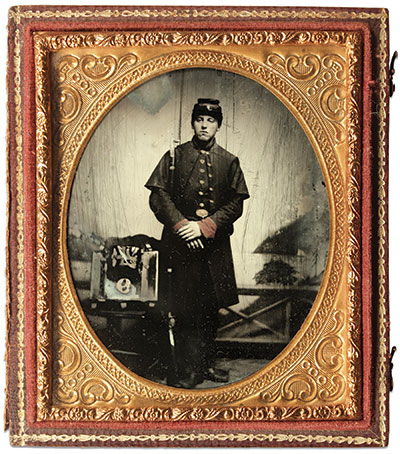 THIS EARLY WAR PORTRAIT, pictures a musket-cradling private in the 9th New York State Militia. He stands beside a rigid knapsack adorned with the number “9,” shown in reverse due to technical limitations with hard-plate photography. Attached to the knapsack is a mess kit. He wears a militia-pattern infantry overcoat of lighter weight cloth with very truncated cape. 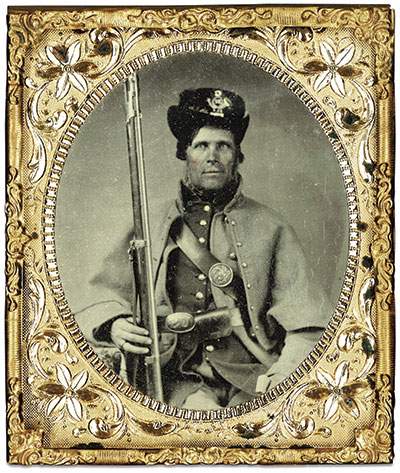 A WELL-ACCOUTERED OLDER UNION INFANTRYMAN is dressed and ready for winter action. His Potsdam or Prussian rifled musket, and cap insignia, G and 37, suggest that he belonged to Company G of the 37th Iowa Infantry. According to The Union Army, the 37th was known as the “‘Graybeard regiment,’ composed of men who had already sent their sons and grandsons to the war. History furnishes no parallel— where the fathers of the soldiers, themselves too old to be received as volunteers, buckled on their armor and asked the government to take them into the ranks of the army. They were all above 45—some were over 60.” The men spent their enlistment on various guard and garrison duties. 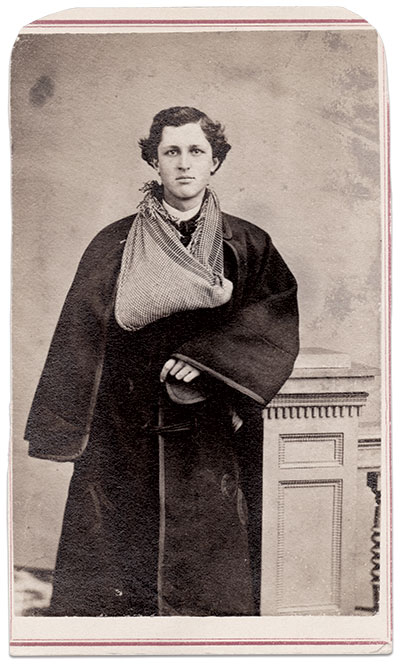 THE CAPE OF THIS OVERCOAT cannot cover the sling supporting the bandaged forearm of Abram Sharpe Smith. A captain in the 80th New York Infantry, Smith was wounded in the leg at the Battle of Second Bull Run in August 1862, and again four months later in the fighting at Fredericksburg. The sling and the presence of the dark blue overcoat indicate he posed for this portrait during the winter months, after his second injury. The cloak is distinguished by black silk braiding on the edge of the cape, frogs and loops of black silk cord, and embellished with trefoil loops on the skirts. Smith left the regiment with a disability discharge in January 1863. He lived until 1908. 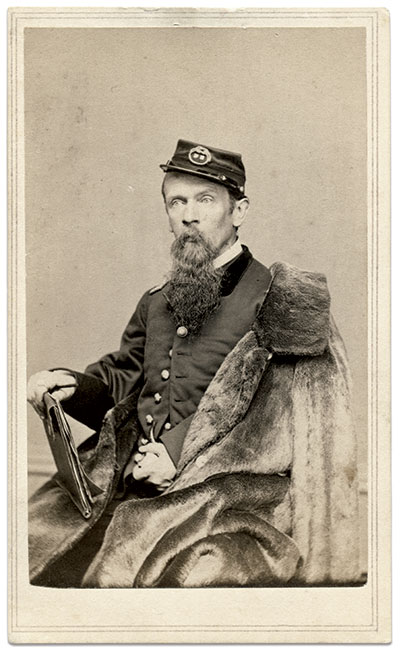 THE FUR COAT, or buffalo robe, worn by this meerschaum pipe-toting Union officer, was non-regulation during the Civil War. His dispatch case and pencil suggest he served as a staff officer or aide-de-camp. 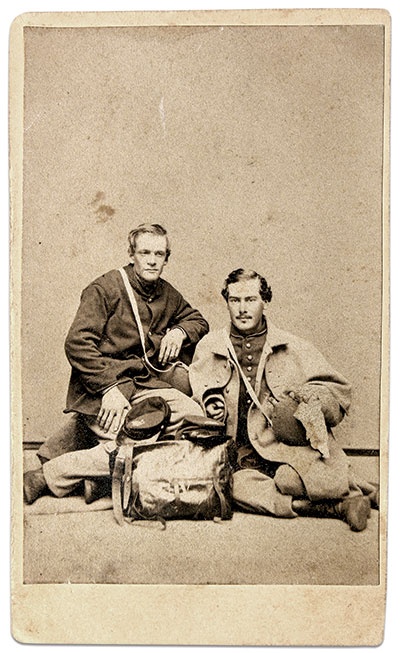 TWO MEMBERS OF THE 25TH CONNECTICUT INFANTRY, Lucien M. Royce (or Rice) and greatcoat-clad Aaron Cook, pose with their canteens. A knapsack stenciled with “25 CV” lies on the floor before them. Both men served nine months in the Deep South before they mustered out in August 1863. Royce ended his service as a private, and Cook left with sergeant stripes. 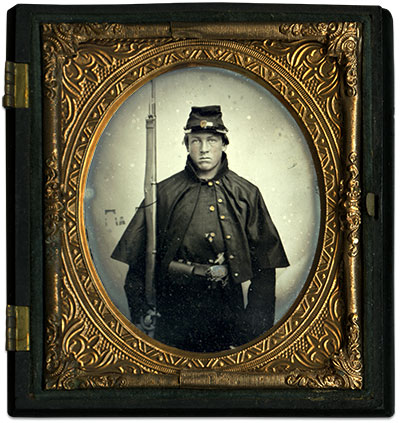 DURING TIMES WHEN ARMY-GRADE sky-blue cloth ran out, suppliers turned to other materials to meet demands. This soldier likely wears one of these greatcoats, crafted of thin black or dark blue cloth.