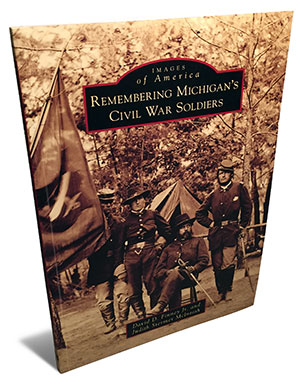 The Images of America books by Arcadia Publishing are ubiquitous. The ongoing series of paperback volumes with their sepia cover and distinctive red and black logo trace the history of the country through vernacular photographs. My first encounter with one of these books was a few years ago, when I discovered the volume for Middlesex, N.J., where I lived from the first grade through my freshman year in high school. I assumed that Images of America solely focused on town histories.

As it turned out, my assumption had been way off. Recently, I discovered one of the latest volumes in the series, Remembering Michigan’s Civil War Soldiers, by David D. Finney, Jr., and Judith Stermer McIntosh. The edition provides an excellent survey of representative portraits of 90,000 Wolverines who participated in the war. According to a note in the introduction, more than 1,000 images were considered for inclusion. Approximately 191 wartime photographs and 25 post-war images ultimately made the cut. The selections are grouped into seven thematic chapters. One of them, “The Ultimate Sacrifice,” features a soldier portrait that is perhaps the most compelling image in the book.

John Egler, a private in the 26th Michigan Infantry, posed proudly for his portrait after he enlisted in the summer of 1862. The photographer’s artful composition added to the effect: Egler holds an apple in one hand and rests an arm on a table, upon which sits a backpack personalized with his name. Egler was wounded at the Battle of Spotsylvania on May 12, 1864, and died of his injury a few weeks later.

Remembering Michigan is one of at least 45 Civil War-related volumes in Images of America. If they are all this well produced, make room in your library for this collection.