One may view Maryland during the Civil War through many lenses. Author Dave Mark offers one unique perspective with his consideration of the state’s wartime role through a survey of portraits in a new book, Maryland Confederate Faces: A Private Collection. 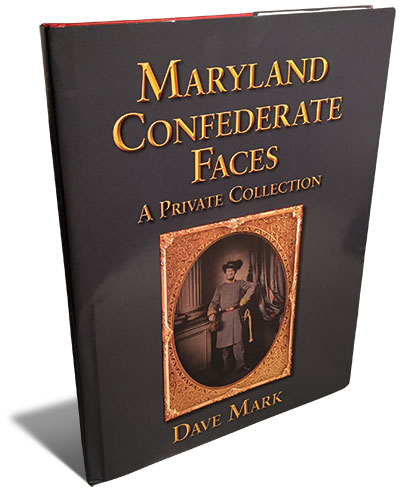 “Marylanders who served in the Confederate States of America did so by their own volition and beliefs,” observes Mark in the introduction. “Many took great risks and endured some hardships in just crossing over the Potomac River into Virginia. Most would be denied the privilege of returning home or seeing their families for the duration of the war.”

What follows is the culmination of a lifetime of collecting. About 200 portraits, primarily ambrotypes, cartes de visite and tintypes, are each accompanied by well-researched captions. Many of the men are identified. You will find names and faces you know — Generals Richard S. Ewell, Lloyd Tilghman and John H. Winder. You will also discover less-known individuals worthy of recognition, including a stunning image of Capt. William Independence Rasin, whose service began with the Missouri State Guard and ended with his escape after the last cavalry fight at Appomattox Court House. Between these events, he suffered battle wounds and endured the rigors of camp and campaign.

Readers of Military Images will recognize some of these portraits from our March/April 1989 issue, which featured Mark’s collection. The cover image of the magazine appears on page 6. The photograph and all the others in Mark’s book are reproduced in full-color. The high quality production values are commensurate with a limited edition set of 200.

Maryland Confederate Faces is a must-have volume for the serious student of Civil War photos. It is also a tribute to the author, as noted in the foreword by renowned educator, researcher and author Ross Kelbaugh: “Through his tireless effort, the compelling stories of bravery, sacrifice, triumph and tragedy on the part of these Marylanders can now be told through this collection.”