Have you ever wondered how historians feel about the photographs they encounter as part of their profession? This thought occurred to two professors and well-known students of Civil War photography, J. Matthew Gallman and Gary Gallagher, who note in the preface of their new and handsome volume, Lens of War, “The project began with a very simple observation. People who study the Civil War spend an enormous amount of energy thinking about and talking about photographs. Yet, we seldom take the photograph as our subject, and we almost never share personal reflections that stray beyond our normal academic writing.” 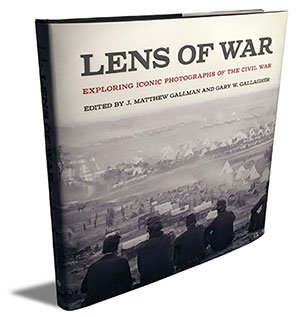 What follows is a collection of musings on 26 iconic and lesser-known photographs of the war by an august group of historians. For instance, Harold Holzer discusses his favorite likeness of Abraham Lincoln and notes the President’s “strange gaze.” Similarly, Ethan S. Rafuse shares his fondness for the seemingly spontaneous portrait of Gen. Robert E. Lee and Traveller on the streets of Petersburg, while Brooks D. Simpson provides a thoughtful study of the “Three Confederates at Gettysburg.” James I. Robertson Jr. reflects on the poignant photograph of a dead horse that touched him as a young researcher.

Lens of War meets the promise of the simple observation that prompted its creation. Additionally, this book provides an excellent analysis of representative images. Perhaps most importantly however, these timeless photographs are the central focus of this volume—a rare event among academics.

Note: Matt Gallman wrote the preface of my 2012 book, African American Faces of the Civil War. I did not consult with Matt or anyone else involved with the production of Lens of War before or during the writing of this review.