Over the past few decades, 19th-century photography has experienced only minor amateur attacks from those intent on defrauding its collecting community. Thankfully these fakes are fairly easy to detect for most experienced dealers and collectors. The money to be made from faking images was never enough to interest professional forgers. They focused their efforts on fine art, manuscripts and other high-end items.

The lack of attention from professional forgers has been a saving grace, for it has contributed to preserving the integrity of what we collect. Thankfully this remains true today.

This being said, dramatic changes are taking place within the current ranks of amateurs producing fakes. They are far smarter, have far better technology, and are very close to producing perfect fake cartes de visite.

Computers, printers and related hardware and software used to create fakes have become dramatically cheaper, and possess much higher quality than the quaint old days of just a few years ago. The lower cost of producing fakes leaves many amateur forgers perfectly content with the money they can take from you.

Technology also allows anyone with knowledge of how period cartes were made to search the web and purchase reproduction (period) glue, real albumen paper, and used or new carte stock for mounting. It also allows them to research the value of Civil War photography, so they wisely choose subject matter that would not stand out as much as what they used to fake. Remember in the first 10-15 years of the 21st century all the U.S. Colored Troops soldiers or incredibly rare Confederate officers that swamped the on-line auctions? The rare poses of George Custer, Joshua Chamberlain, and other scarce and valuable Union officers? It took a while, but most collectors caught on to the fact these were fakes and stopped buying them.

Like the snakes they are, the fakers shed that (fake) skin and have now embraced less spectacular content, such as Medal of Honor recipients, outdoor scenes, or a well-posed armed soldier to fake, along with anything appealing but NOT alarmingly rare. Fakes that will bring good money, but keep the collectors “fake radar” from activating.

Fakers have learned to produce quality cartes de visite on albumen paper. It may be real albumen but there is a hurdle they just can’t clear—they can’t get the colors correct. They are always a weird shade of gray or too red, etc. Refresh your memory of correct colorization by looking at authentic period cartes. The beautiful golden brown hues of authentic cartes de visite are almost impossible to match with modern printing methods, but more of the fakes are coming closer than at any other time I can recall. Thankfully most fakes are still just off enough to make you uncomfortable and want to take a closer look. You’ll read about examples later in this column.

Capitalizing on the collector’s psychology

Image collectors have a serious competitive drive and really enjoy the thrill of the hunt. This drive spurs us to build our collections—but it can also cloud our judgment at critical times. Most of us will do what it takes to get those special images.

We have all been to shows where a new dealer sets up and everyone jostles each other to get to the front and center of the table. Sometimes voices are raised. The thrill of victory and acquisition is intoxicating (more on this shortly). The same is true online. Check social media sites dedicated to discussing and selling 19th-century military photography. Those who frequent these sites can be aggressive in the pursuit of better images when they are posted. And once the dreaded word “SOLD” is added to the post, comments from those who did not get there in time reveal their disappointment.

It is human nature at work. Forgers know this above all else. They take advantage of these behaviors when introducing their spurious images into the market. They understand that by placing fakes in competitive situations, you are less likely to notice any minor flaws, especially while you are on your way to crushing the competition!

Bottom line: It’s good to acquire photographic jewels, but keep your wits about you and always have a close look at what you are buying.

A few last thoughts on the psychology angle—Older Collectors in image collecting tend to be targeted by the fakers.

They tend to have larger amounts of disposable income to spend and the time to spend it!  I am now in my 60’s and I wear glasses (trifocals). Without them, I am very uncomfortable viewing images. Eyesight is something that diminishes with age. This is hard to admit, but it is true. Bad people factor age into their calculations, as well as how prideful people can be about admitting their need to wear glasses. “I wish I would have brought my glasses” is a common enough refrain in all retail settings. Don’t be the one who buys a fake at the show because of poor eyesight. It seems easy enough but you would be amazed at how optically challenged people are for reasons known only to them.

All these subtle and not-so-subtle assaults by fakers make it hard for any collector to be vigilant at physical shows and online marketplaces.

Here are two recent cases that happened to me. They illustrate the weaponization of technology and psychology. Also the greed and stupidity of the author, who should have known better!

Yours truly: stupid is as stupid does

While looking around on a dealer day during one of the major 2019 Civil War shows, I spotted a table of unpacked boxes. A crowd began to form. I felt that beautiful tingle of opportunity, wedged my way in and grabbed a box of cartes de visite. Then the fun commenced. The prices were all vintage 1980’s, when collecting was still cheap. The fever was on me. I could hardly believe my luck! I confirmed the prices with the seller and built a large stack of goodies. Beads of sweat formed as I guarded my images from prying eyes. 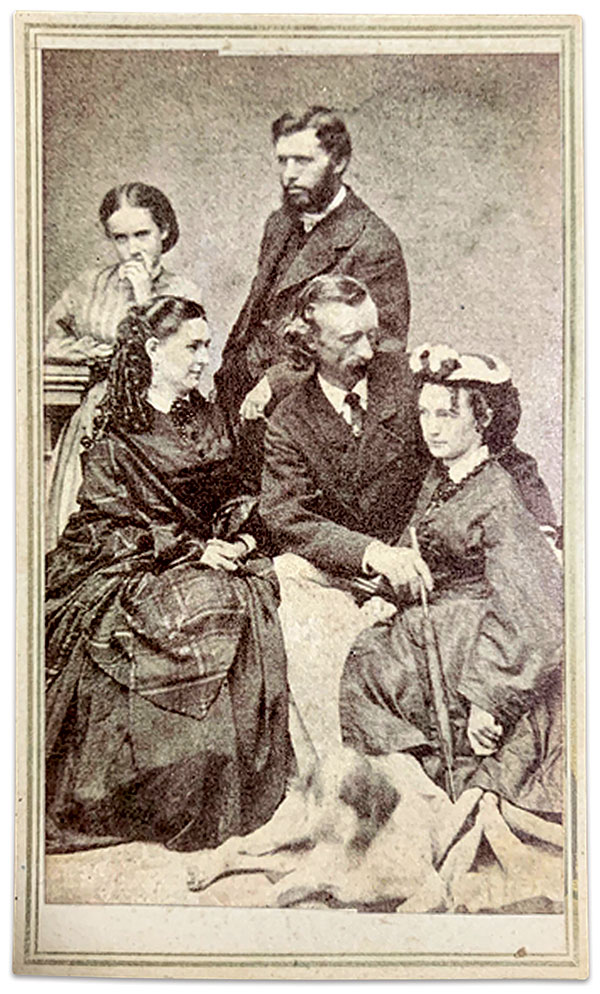 I was half-way down the box when I spotted one of the Holy Grails of photo collecting—the Custer group carte de visite. The photo was housed in a Ryker mount, one of those black-framed specimen boxes filled with cotton or other backing and topped with a glass or plastic cover. The photo was marked $350, which seemed consistent with 1980’s pricing. I opened the Ryker mount and performed the usual inspection. It felt like an albumen, had a back mark and passed muster to my eyes. The profit I’d make on this image alone would make the show a great one for me. I put it back into the Ryker mount, moved it to the bottom of my stack, finished looking around and paid my bill.

I carried the treasure back to my table and put all of it away except the Custer carte. I proudly showed off my great triumph to several dealer friends, who congratulated me.

I never once took a magnifying loop to the image. Not one time. In the middle of my self-indulgent tour, I showed it to a friend who did.

Here’s the ugly part. The photo was produced with real albumen on real carte stock. But there was a problem. The image area bore signs of a laser printer, but of a type I have not seen before. Had I taken the time in the middle of my buying frenzy to take a close look with a loop, I would have noticed the flaw.

I got my money back and I told the dealer he needed to destroy it. I’m pretty sure the seller wasn’t the mastermind. I hope. 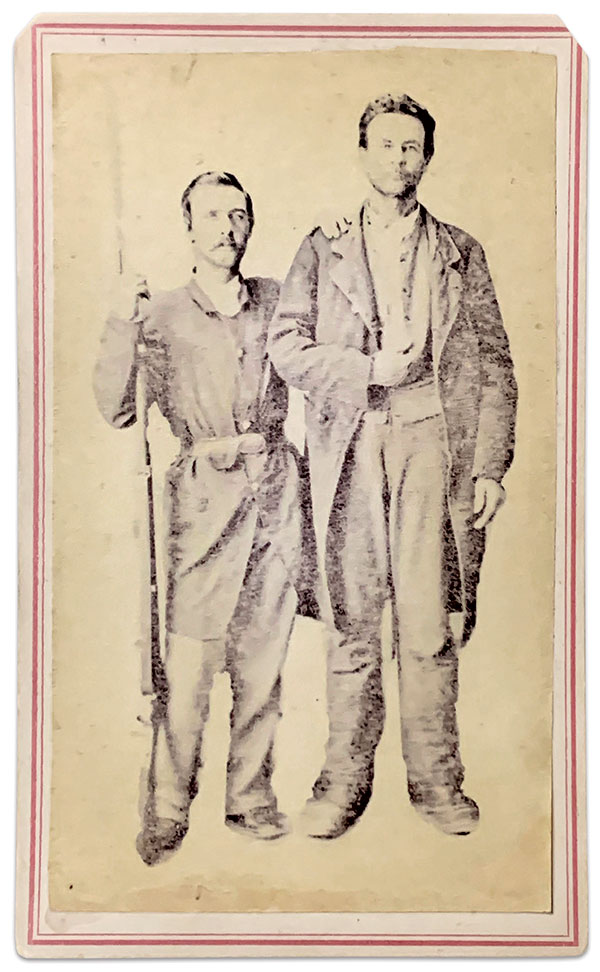 I bought this image of the famous Confederate guerrilla Champ Ferguson in an online auction for a princely sum. I couldn’t help myself—outstanding subject matter and a damn good appearance on my monitor (much better than the way it looks in person). Best of all, while not cheap, I could make some good money selling it.

I didn’t know how faded the image was until it arrived in my mailbox. It also possessed an unnatural purplish color that wasn’t obvious in the auction photo. Upon closer examination, I observed a slight indentation on the period mount where the original albumen had been removed and replaced with this modern albumen print. Seems our genius knew about albumen printing, but not enough to get the color correct.

I had encountered fakes with these telltale signs in years past. The forger had contacted me and other dealer friends at various times over the years with an offer to sell us hundreds of scarce cartes if we were interested to meet him in Nashville, Tenn. Never once did he ever commit or send an address or phone number. He bounced around auction sites under different names, swamping them with these faded purple monsters until he got so greedy he was copying famous one of a kind images. Eventually, the alarm bell rang so loudly that a certain online auction couldn’t ignore it any longer, and shut him down. But not before he had done major damage to all of us.

I never asked for my money back and have kept this fake for my Wall of Shame.

Weaponized technology and psychology are a difficult combination for collectors to overcome. You can help minimize attacks by sharing your experiences and continuing your education in the school of photo collecting. By doing so, we can raise awareness of fakes and make it far less profitable for anyone to produce them.

I am doing my part, working to expose the evildoers and stop horrible breaches that erode our trust. My special focus is on dealers and long-time collectors, who I believe are largely responsible for the majority of fake and fraudulent images. (I realize this theory will likely raise some eyebrows.)

I firmly believe we will eventually be victorious, my friends. Pay attention to everything you’re buying and this beautiful hobby will live on for future generations to enjoy.

Perry Frohne is the owner of Frohne’s Historic Military. He has been investigating fake images for more than 20 years. He is an MI Senior Editor.