It is well known by collectors that the federal government taxed photographs to pay for the Civil War. To prove payment, photographers added revenue stamps in various denominations, usually on the back of the image. The tax took effect on Aug. 1, 1864, and ended with its repeal on July 31, 1866. Surviving images from this period often include the stamps with cancelled dates and a photographer’s initials.

It is a mistake, however, to conclude that tax-stamped images do not exist beyond these date parameters.

Author Bruce Baryla has well documented post-repeal stamps in an award-winning online exhibit at the American Association of Philatelic Exhibitors (AAPE). The featured stamps are all dated after the repeal date of July 31, 1866. Among the likely explanations as to why the photographers continued to charge and pay the tax after this date is that news of the revenue tax repeal didn’t reach photographers in a timely manner. Most post-repeal images that have passed through my hands bear dates from the first 10 days of August 1866, though they can be found with dates in September 1866.

Unknown to most collectors, and not documented in the AAPE exhibit, are what I call pre-imposition tax stamps. Though the official start date was Aug. 1, 1864, a few exuberant photographers jumped the gun and applied the stamps in late July, as seen in these examples. Exactly why photographers applied the stamps early is not understood, though the reasons they continued to apply the stamps after the repeal may apply.

The authenticity of pre-imposition and post-repeal stamps must be considered, as an unscrupulous person might create spurious examples. Easily faked, revenue stamps were used widely for bank checks, playing cards, telegrams and other items, in addition to photographs. When examining cartes de visite, I look for a known photographer’s stamp or photographer initials that match the name of the photographer printed on the mount to ensure authenticity. The cancellation itself offers another confirming characteristic, and it often runs onto the cardstock of the mount along the edges of the revenue stamp. 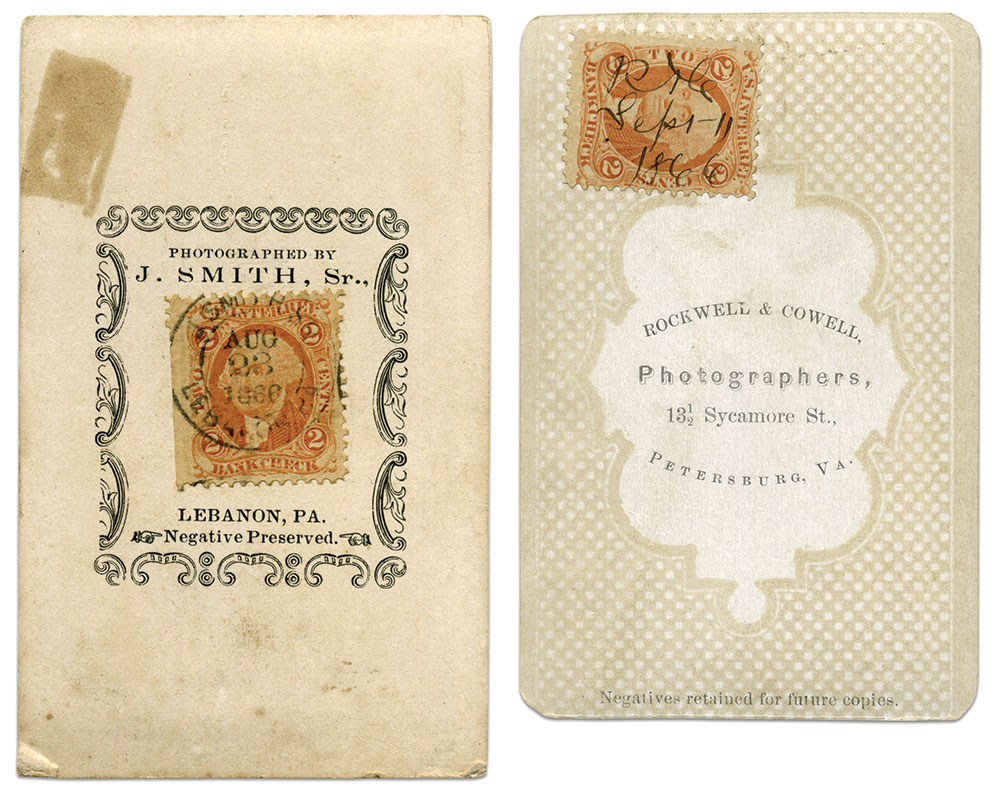 Left: The cancellation has the date, Aug. 23 1866. The photographer’s name and location match the printed information on the mount—J. Smith, Sr., of Lebanon, Pa. Note the ornamental borders and typography creates a frame around the 2-cent revenue stamp.

Right: The Sept. 11, 1866, cancellation is the latest post-repeal revenue date the author has encountered. Note the initials R and C, which match the names of photographers Rockwell & Cowell of Petersburg, Va. 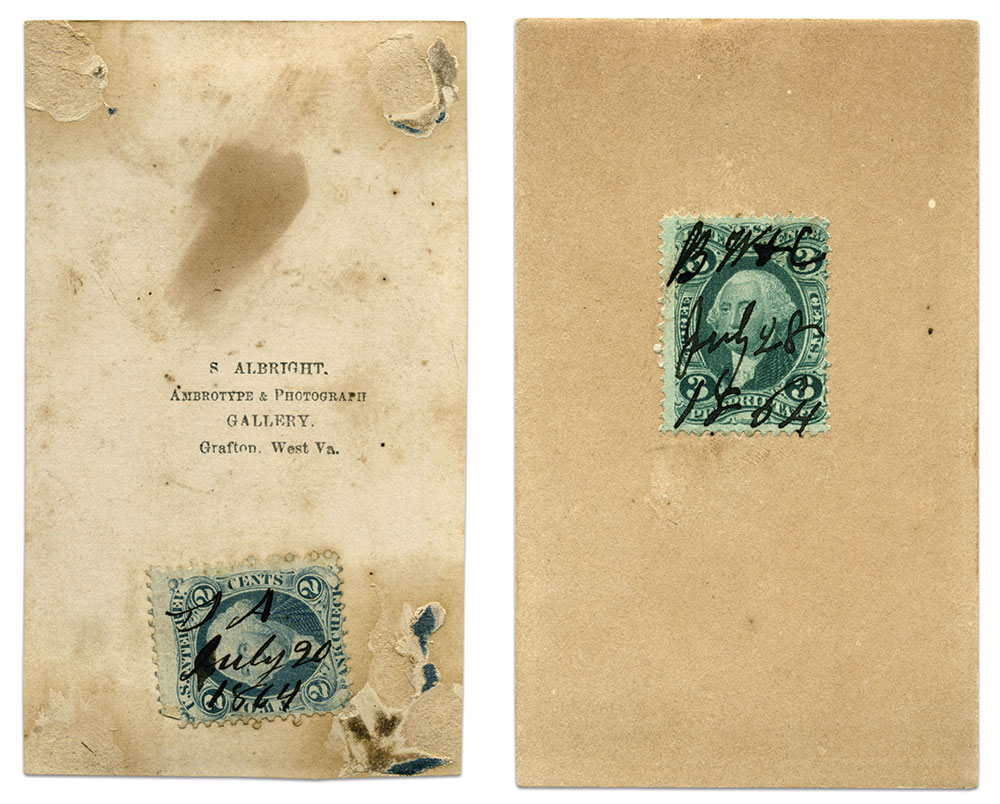 Left: The initials of S. Albright of Grafton, W. Va., are written in pen to cancel this revenue stamp, along with the date July 20, 1864—almost two weeks before the tax act went into effect.

Right: Just four days before the tax act, the studio of Brown, Williams & Co. of St. Louis, Mo., cancelled this stamp with their initials and the date.

Scott Vezeau of Clarksville, Tenn., is a collector and researcher of antique images. He is a graduate of the United States Military Academy (West Point) and a retired U.S. Army Infantry Officer.